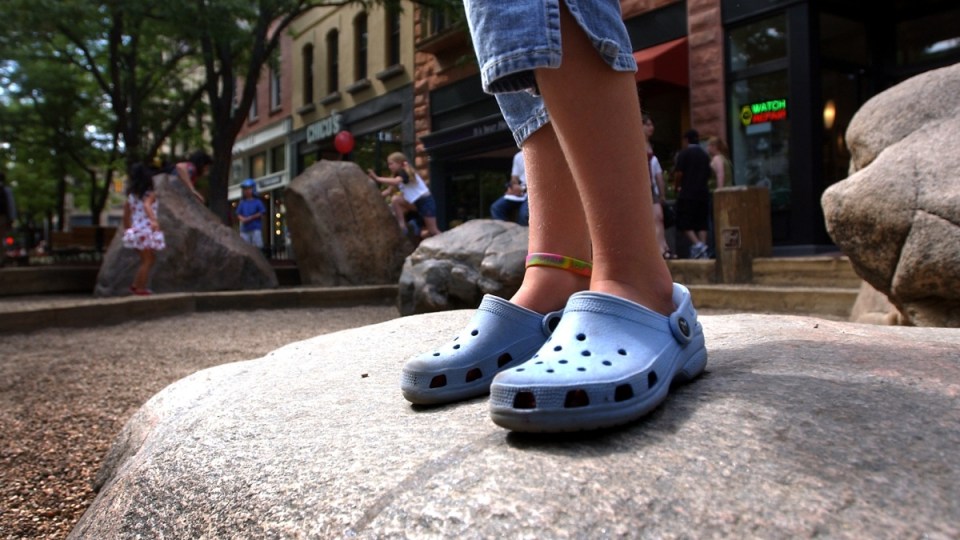 The return of the this iconic rubber footwear is something Kirstie Clements plans to skip. Photo: Getty

While I am most unlikely to adopt any wild fashion trends at my age, I do like to keep across what’s going on.

One big trend, that I fully intend to miss is Crocs.

I understand the ironic appeal of the ugly but comfortable shoe, I really do, and I have my own versions (the Marni Fussbett sandal). But I don’t care if the Croc is designer or garden variety, they were ugly when they were invented and they remain that way, no matter how much you bedazzle them and add a few 000’s to the price.

I noticed a young woman in the city who looked great, in a black pantsuit, a khaki trench coat, a fab bag and her hair pulled up in a ponytail and hot pink Crocs. I know the idea is that they are a cool wardrobe update, but they do look like giant clown shoes, so I hope she wasn’t off to a job interview.

The amphibious rubber Croc was originally developed as a boating shoe and unveiled in 2002 in Florida. If the guest photos at Donald Trump’s Mar-a-Lago hotel are anything to go by, the state isn’t exactly a style capital.

But in a real example of ‘there’s no accounting for taste’, Crocs have since sold more than 720 million pairs and are now one of the top 10 non-athletic footwear brands in the world, with expected revenue to increase to more than $5 billion by 2026. So don’t pay attention to me.

Another major trend we are seeing is ‘The Art of the Table’, as fashion houses such as Dolce and Gabbana, Ralph Lauren and Hermes continue to expand their glorious tableware and home offerings.

The newly refurbished Dior flagship store in Paris, 30 Avenue Montaigne, has a breathtaking array of tableware, glassware and napery, all with eye-watering price tags.

Milan’s recent design fair Salone de Mobile concentrated heavily on the art of the table with beautiful examples at fashion houses such as La Double J, which features bright colours and patterns, layer upon layer.

It’s a trend that’s been taken up by younger style influencers as well, as setting a gorgeous table complete with multicoloured and patterned charger plates (for those who aren’t familiar with the term, a charger plate is larger than a dinner plate but smaller than a serving platter and used as a decorative base for plates and bowls), glassware, napkins, placemats, flowers and candlesticks is very Instagrammable.

Lockdowns were certainly responsible for an upsurge of people buying more cookware and dinnerware, so it is interesting to see table runners becoming just as important as handbags for a new generation.

I’ve been watching the glowing skin phenomenon for quite a while now, as the beauty girls of social media model their super luminous complexions (I think we went more for dewy in my day).

I assumed my radiant skin days were behind me, but I was buying my favourite sunblock recently and discovered a Glow Serum by Mecca Cosmetica which achieves exactly what it says. It’s an oil-serum you put over sunblock and you end up … glowing.

After a four-week bout of influenza, it felt like a magic pick-me-up.

Watch: Woman rescued after vehicle plunges into sinkhole
Space debris is coming down more frequently. What are the chances it could do real damage?
Today's Stories

Trendy but still ugly: Crocs are coming back, and Kirstie Clements is not on board