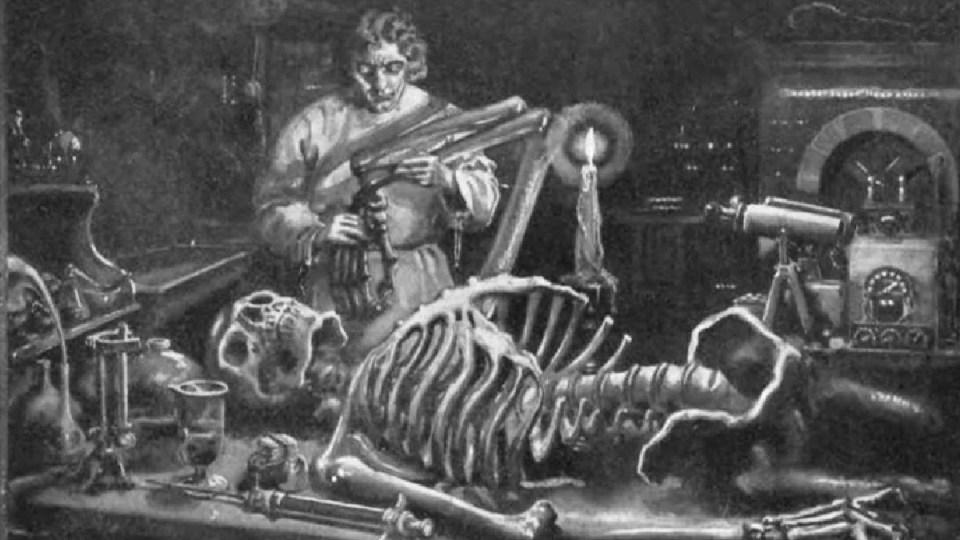 Dr Frankenstein at work in his laboratory. Photo: Wikimedia Commons

Frankenstein, or, The Modern Prometheus, is an 1818 novel by Mary Wollstonecraft Shelley.

Set in the late 18th century, it follows scientist Victor Frankenstein’s creation of life and the terrible events that are precipitated by his abandonment of his creation.

It is a Gothic novel in that it combines supernatural elements with horror, death and an exploration of the darker aspects of the psyche.

It also provides a complex critique of Christianity. But most significantly, as one of the first works of science-fiction, it explores the dangers of humans pursuing new technologies and becoming God-like.

Shelley’s Frankenstein is at the heart of what might be the greatest celebrity story of all time.

Shelley was born in 1797. Her mother, Mary Wollstonecraft, author of the landmark A Vindication of the Rights of Women (1792), was, according to that book’s introduction, “the first major feminist”.

Shelley’s father was William Godwin, political philosopher and founder of “philosophical anarchism” – he was anti-government in the moment that the great democracies of France and the United States were being born.

When she was 16, Shelley eloped with radical poet Percy Shelley, whose Ozymandias (1818) is still regularly quoted (“Look on my Works, ye Mighty, and despair!”).

Their relationship seems to epitomise the Romantic era itself. It was crossed with outside love interests, illegitimate children, suicides, debt, wondering and wandering. And it ultimately came to an early end in 1822 when Percy Shelley drowned, his small boat lost in a storm off the Italian coast.

The Shelleys also had a close association with the poet Lord Byron, and it is this association that brings us to Frankenstein.

In 1816 the Shelleys visited Switzerland, staying on the shores of Lake Geneva, where they were Byron’s neighbours. As Mary Shelley tells it, they had all been reading ghost stories, including Coleridge’s Christabel (Coleridge had visited her father at the family house when Shelley was young), when Byron suggested that they each write a ghost story. Thus 18-year-old Shelley began to write Frankenstein.

The myth of the monster

The popular imagination has taken Frankenstein and run with it. The monster “Frankenstein”, originally “Frankenstein’s monster”, is as integral to Western culture as the characters and tropes from Lewis Carroll’s Alice’s Adventures in Wonderland.

But while reasonable continuity remains between Carroll’s Alice and its subsequent reimaginings, much has been changed and lost in the translation from Shelley’s novel into the many versions that are rooted in the popular imagination.

There have been many varied adaptations, from Edward Scissorhands to The Rocky Horror Picture Show (see here for a top 20 list of Frankenstein films). But despite the variety, it’s hard not to think of the “monster” as a zombie-like implacable menace, as we see in the [trailer to the 1931 movie, or a lumbering fool, as seen in the Herman Munster incarnation.

Further, when we add the prefix “franken” it’s usually with disdain; consider “frankenfoods”, which refers to genetically modified foods, or “frankenhouses”, which describes contemporary architectural monstrosities or bad renovations.

However, in Shelley’s novel, Frankenstein’s creation is far from being two-dimensional or contemptible. To use the motto of the Tyrell corporation, which, in the 1982 movie Blade Runner, creates synthetic life, the creature strikes us as being “more human than human”. Indeed, despite their dissimilarities, the replicant Roy Batty in Blade Runner reproduces Frankenstein’s creature’s intense humanity.

Some key elements in the plot

The story of Victor Frankenstein is nested within the story of scientist-explorer Robert Walton. For both men, the quest for knowledge is mingled with fanatical ambition.

The novel begins towards the end of the story, with Walton, who is trying to sail to the North Pole, rescuing Frankenstein from sea ice. Frankenstein is being led northwards by his creation towards a final confrontation.

The central moment in the novel is when Frankenstein brings his creation to life, only to be immediately repulsed by it:

I had worked hard for nearly two years, for the sole purpose of infusing life into an inanimate body. For this I had deprived myself of rest and health. I had desired it with an ardour that far exceeded moderation but now that I had finished, the beauty of the dream vanished, and breathless horror and disgust filled my heart.

Victor Frankenstein, like others in the novel, is appalled by the appearance of his creation. He flees the creature and it vanishes. After a hiatus of two years, the creature begins to murder people close to Frankenstein. And when Frankenstein reneges on his promise to create a female partner for his creature, it murders his closest friend and then, on Frankenstein’s wedding night, his wife.

The real interest of the novel lies not in the murders or the pursuit, but in the creature’s accounts of what drove him to murder.

We learn that the creature spent a year secretly living in an outhouse attached to a hut occupied by the recently impoverished De Lacey family.

As he became self-aware, the creature reflected that, “To be a great and virtuous man appeared the highest honour that can befall a sensitive being”. But when he eventually attempted to reveal himself to the family to gain their companionship, he was brutally driven from them. The creature was filled with rage. He says, “I could … have glutted myself with their shrieks and misery”. More human than human.

“Oh Frankenstein! Generous and self-devoted being! What does it avail that I now ask thee to pardon me? I, who irretrievably destroyed thee by destroying all thou lovedst.”

The creature goes on to make several grand and tragic pronouncements to Walton. “My heart was fashioned to be susceptible of love and sympathy; and when wrenched by misery to vice and hatred, it did not endure the violence of the change, without torture such as you cannot even imagine.”

And shortly after, about the murder of Frankenstein’s wife, the creature says: “I knew that I was preparing for myself a deadly torture; but I was the slave, not the master, of an impulse, which I detested, yet could not disobey.”

These remarks encourage us to ponder some of the weightiest questions we can ask about the human condition:

What is it that drives humans to commit horrible acts? Are human hearts, like the creature’s, fashioned for ‘love and sympathy’, and when such things are withheld or taken from us, do we attempt to salve the wound by hurting others? And if so, what is the psychological mechanism that makes this occur?

And what is the relationship between free will and horrible acts? We cannot help but think that the creature remains innocent – that he is the slave, not the master. But then what about the rest of us?

The rule of law generally blames individuals for their crimes – and perhaps this is necessary for a society to function. Yet I suspect the rule of law misses something vital. Epictetus, the stoic philosopher, considered such questions millennia ago. He asked:

What grounds do we have for being angry with anyone? We use labels like ‘thief’ and ‘robber’ … but what do these words mean? They merely signify that people are confused about what is good and what is bad.

Victor Frankenstein creates life only to abandon it. An unsympathetic interpretation of Christianity might see something similar in God’s relationship with humanity. Yet the novel itself does not easily support this reading; like much great art, its strength lies in its ambivalence and complexity.

At one point, the creature says to Frankenstein: “Remember, that I am thy creature; I ought to be thy Adam, but I am rather the fallen angel, whom thou drivest from joy for no misdeed.” These and other remarks complicate any simplistic interpretation.

In fact, the ambivalence of the novel’s religious critique supports its primary concern: The problem of technology allowing humans to become God-like. The subtitle of Frankenstein is The Modern Prometheus. In the Greek myth, Prometheus steals fire – a technology – from the gods and gives it to humanity, for which he is punished.

In this myth and many other stories, technology and knowledge are double-edged. Adam and Eve eat the apple of knowledge in the Garden of Eden and are ejected from paradise. In 2001: A Space Odyssey, humanity is born when the first tool is used – a tool that augments humanity’s ability to be violent.

The novel’s subtitle is referring to Kant’s 1755 essay, The Modern Prometheus. In this, Kant observes that:

There is such a thing as right taste in natural science, which knows how to distinguish the wild extravagances of unbridled curiosity from cautious judgements of reasonable credibility. From the Prometheus of recent times Mr Franklin, who wanted to disarm the thunder, down to the man who wants to extinguish the fire in the workshop of Vulcanus, all these endeavours result in the humiliating reminder that Man never can be anything more than a man.

Victor Frankenstein, who suffered from an unbridled curiosity, says something similar:

A human being in perfection ought always to preserve a calm and peaceful mind … If the study to which you apply yourself has a tendency to weaken your affections, and to destroy your taste for those simple pleasures in which no alloy can possibly mix, then that study is certainly unlawful, that is to say, not befitting the human mind.

And also: “Learn from me … how dangerous is the acquirement of knowledge and how much happier that man is who believes his native town to be the world, than he who aspires to become greater than his nature will allow.”

In sum: Be careful what knowledge you pursue, and how you pursue it. Beware playing God.

Alas, history reveals the quixotic nature of Shelley and Kant’s warnings. There always seems to be a scientist somewhere whose dubious ambitions are given free rein. And beyond this, there is always the problem of the unintended consequences of our discoveries.

Since Shelley’s time, we have created numerous things that we fear or loathe such as the atomic bomb, cigarettes and other drugs, chemicals such as DDT, and so on. And as our powers in the realms of genetics and artificial intelligence grow, we may yet create something that loathes us.

It all reminds me of sociobiologist Edward O. Wilson’s relatively recent (2009) remark that, “The real problem of humanity is the following: We have Paleolithic emotions, medieval institutions, and god-like technology.”

Frankenstein: What Mary Shelley’s sci-fi classic teaches us about the dangers of playing God