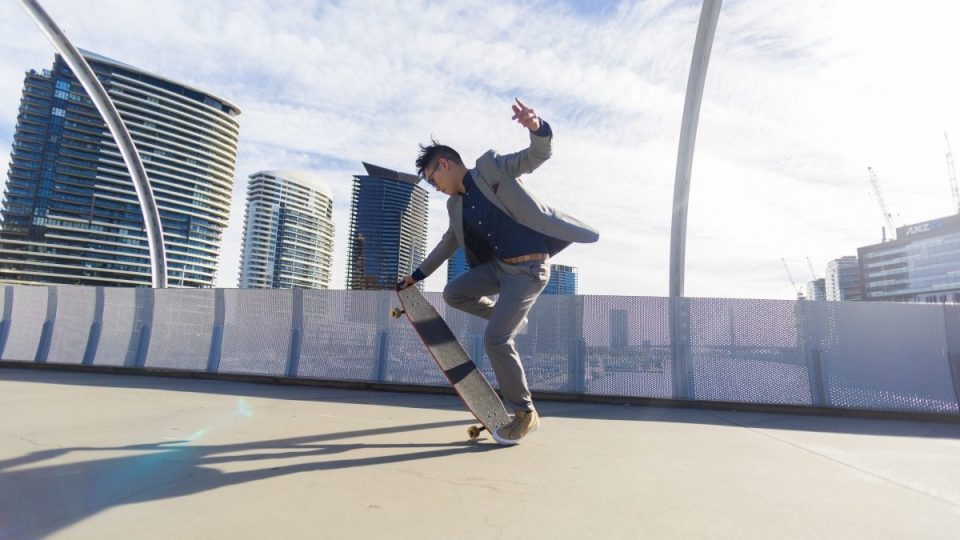 Sunset Skate Sessions is one of Melbourne’s most recognised longboarding communities, where up to 30 skaters meet in the CBD every week. Photo: Brandon Yong

Inner West Council in Sydney voted to build a skate park in Leichhardt Park this month – much to the dismay of local residents.

According to the Sydney Morning Herald, they feared the park would attract mess, anti-social behaviour and “juveniles swearing and carrying on”, as one resident put it.

That’s despite councillors from other areas saying skate parks built in their areas led to less anti-social behaviour, particularly in children and young adults.

Even so, locals aren’t convinced. Skaters, after all, have a history of being misfits.

But across Australia, many are challenging that stereotype – finding community, support and mindfulness in skateboarding.

A mindfulness exercise at any age

Keith Zgrajewski, 54, is often asked questions about his electric skateboard. Kids through to seniors want to know how it works.

Sometimes they just stop and smile at him as he whooshes past.

For Mr Zgrajewski, skateboarding is a mindfulness exercise.

“I had no idea before I started skating, but it’s the smile it puts on your face. And people smiling at you too,” he told TND.

The Queenslander picked up his first electric skateboard four years ago. It frees his mind, he says, and stops him ruminating on any one issue for too long.

“When you’re riding one of these things, there’s a carve that you do which is like a sideways motion backwards and forwards, left to right. You can hear the tyres against the ground, the motor – there’s this vibration,” he said.

What that does to your body and mind – Mr Zgrajewski doesn’t know what it is exactly, but it puts a “s***-eating grin” on his face.

“It can be dangerous though,” he warned.

A year after Mr Zgrajewski started skating, he broke his knee cap.

“I came off at high speeds,” he recalled.

He spent the next few months in rehab, but his desire to skate never faded.

Skateboarding caused quite the buzz last year after it made its debut at the Tokyo Olympic Games.

The non-profit organisation, based in Newcastle, uses skateboarding to promote wellbeing in young people with disabilities, as well as in adults struggling with their mental health.

Classes have easily doubled in size since the start of the pandemic.

“I know a lot of young people who are pursuing skateboarding as a sport now. And I see a lot of people connecting with it as something they can do either by themselves or with people who they feel safe and encouraged around,” Mr O’Donnell said.

He came up with the idea for Bloom in 2019, when he worked as a disability support worker.

“What I’m trying to create in Bloom is a person-centred experience. It’s more about them being able to express themselves and giving them a lot of freedom to do that,” Mr O’Donnell explained.

“It’s not a prescription-based thing – we don’t set up obstacles and tell them they have to do this or that.”

Mr O’Donnell, who has been skating for 22 years, believes there is so much more to skateboarding than just learning how to do it.

“You learn about who you are, your boundaries, being able to build resilience and confidence, and that really bleeds into every facet of our lives – all the way into adulthood.”

One of the most rewarding parts of Mr O’Donnell’s work is seeing the supportive community he has built. It’s being able to tell a 10-year-old that it’s OK to fall and hurt yourself.

“‘It sucks, but we’ll help you up’, you know? ‘Here’s what you need to help achieve your goals or overcome that fear.’”

Melbourne psychologist Tim Bonaldi, a skateboarder himself, said the sport’s history of being seen as something for misfits actually helps build a tight-knit community, not an anti-social one.

“I think the idea that skaters are misfits or outcasts does somewhat help make the bond you share within the community closer,” Mr Bonaldi told TND.

“You are living a shared experience. Shared misdirected judgements and doubt from the public can actually serve to bring the subculture closer.”

In his experience, the skating community is a relatively welcoming and inclusive one.

He described it as a “level playing field”, “where barriers are broken down”, while Mr Bonaldi added that he sees plenty of promise in the community to become even more inclusive.

“It will take time to reach the level it needs to be on, but it’s looking really promising,” he said.

Every Sunday, somewhere between 20 to 30 longboarders gather at IMAX Melbourne.

Longboarding is an offshoot of skateboarding and because skaters are using wider and longer boards, it means they can dance on them too.

The flat open space outside the cinema is the perfect meeting place for Sunset Skate Sessions, a longboarding crew founded by Jess Mooi 10 years ago.

At first, she just wanted to exercise. But the more Ms Mooi skated, the more people she met who told her, ‘I skate, too’.

“People just started to notice us.”

Before long, she had built a community where anyone could feel like they belonged.

Ms Mooi even created T-shirts. They’re emblazoned with the group’s logo: a sideways diamond containing an illustration of a highway sunset. Longboards stick out of every side, like swords on a family crest.

“If you feel like you don’t fit in anywhere, the moment you come skating and put on your T-shirt, you feel united. People look out for each other,” Ms Mooi said.

Brandon Yong, 28, is one of the organisers of Sunset Skate Sessions. He was one of the members who stepped up to help Ms Mooi when managing the group became too much for one person.

“Skating is a really good opportunity for us to unwind,” Mr Yong said, adding that many members of the group are currently in university and preparing for exams.

“It really gives us an outlet to creatively express ourselves without the pressure of trying to do life normally.”

Even in lockdown, when life was far from normal, skaters in the community still kept in touch.

Where possible, one skater would meet up with another in their five-kilometre bubble. It may have only been for an hour, but it was something they could do together.

“Skating by yourself is alright, it’s good, but when you’re with someone else, or a community of people, it’s so much better,” Robert Gourlay, 24, said.

Mr Gourlay, another organiser of the group, agreed that skating – like any other hobby or passion – is a great way to unwind after a day of work or study.

“If you’re doing something like painting, you’re mindful, you’re thinking about your strokes – it’s no different than skating,” he explained.

“I have to think about minute foot placements to make sure the board turns in the way I want it to turn. I just have a higher risk of hurting myself, probably.”

Then again, that’s part of the thrill.

“When you’re on a skateboard, you’re just kind of rolling. Nothing else matters apart from the wind through your hair,” he described.

“That is until you hit a tiny, tiny rock and think, ‘Ah, this is life. I remember now’.”

But that’s just part of the ride.