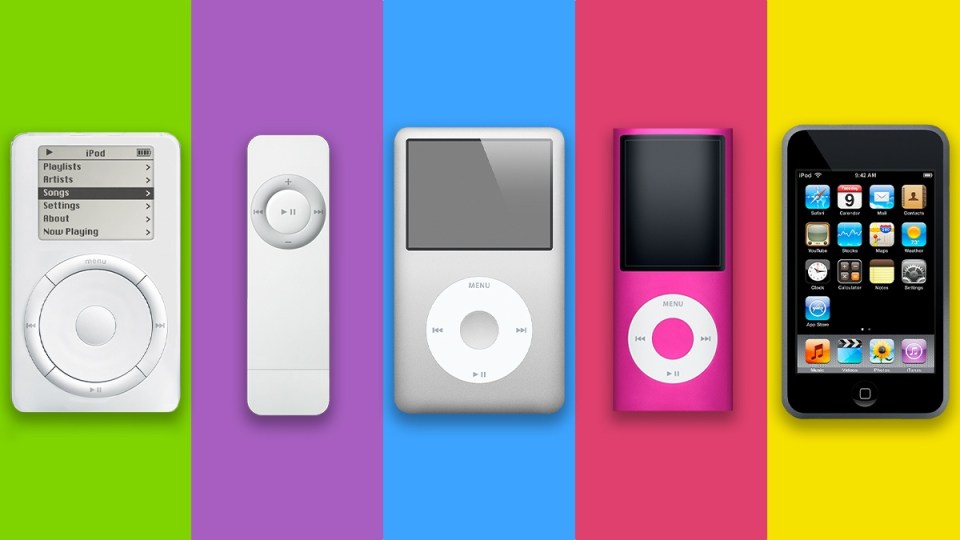 iPods came in many forms, but they were a stalwart of the Apple roster for over 20 years. Photo: TND/Apple

After 20 years, the Apple iPod is taking its final bow.

The company announced on Wednesday it is discontinuing production of the portable music player, which isn’t a huge shock considering the device was last updated in 2019, and hasn’t really been mentioned by Apple since.

When the iPod first launched in October 2001, it was still common to see people bopping their heads to music blaring through thick headphones connected by cable to a portable cassette or CD player.

However, the iPod was not the first of its kind.

Other MP3 players were already on the market, but the combination of iPods with iTunes software, which Apple had launched earlier the same year, made the device a game-changer.

When introducing iPods for the first time, Apple co-founder and then-CEO Steve Jobs stood in front of a powerpoint presentation on a small stage in his ubiquitous black turtleneck, and talked about the current portable music devices on the market.

“To have your whole music library with you at all times is a quantum leap in listening to music,” Mr Jobs said.

How the world reacted

Reactions to the device were mixed; some initial online commentators bemoaned the introduction of yet another MP3 player.

The customer-base for a first-generation iPod was also limited since the device could initially only work with a Mac. Apple released a Windows PC-compatible iPod seven months after the initial launch.

Some musicians also initially refused to make their music available on iTunes; AC/DC guitarist Angus Young told the The Telegraph in 2008 that one reason why the band wouldn’t sell its new album on the platform is because Apple allowed customers to buy individual songs instead of forcing them to buy whole albums.

But many, if not most, other musicians raised no objections, and the device’s available storage, ease-of-use and sleek design bought it a steadily-rising customer base.

By October 2004, Forbes reported the company had sold about 7.3 million iPods, and that Apple made more from iPod sales than from “any single line of its computers”.

Three years later in 2007, Apple reported the sale of its 100 millionth iPod.

Upon Mr Jobs’ death in 2011, several music industry heavyweights reflected on the impact he had made with iPods.

Grammy Museum executive director Robert Santelli said what Mr Jobs had done with the iPod was as important as the invention of the phonograph.

“We counted on him as a world to show us how we listen to music and how we consume it,” Mr Santelli said.

The current – and now final – iPod design is virtually unrecognisable when compared to its first iteration.

The first-generation iPod was the size of a deck of cards and had a small black-and-white LED screen with a circular control-button panel surrounding a scroll wheel underneath.

The device underwent several transformations over the years.

The first few versions kept the same overall shape and style of the original, with the main focus put on expanding available storage.

Then came coloured-LED screens, and the ability to play videos.

Some of the most well-known generations could be considered the iPod nano and the tiny iPod shuffle (the first iPod not featuring a screen display).

Despite competition from the likes of Sony, Rio and Dell, iPods dominated the portable music device scene for years.

But 2007’s iPod touch, which should have been revolutionary with its combination of a touch screen, camera, messaging ability and app store, was overshadowed by the release of the first iPhone earlier in the year.

Beginning of the end

Apple’s first iPhone would be considered an unbearably slow brick by today’s standards, but in 2007 it was revolutionary – and it featured the ability to listen to music.

At the time, the iPhone’s music app was even titled ‘iPod’.

Mr Jobs referred to the iPod touch as “training wheels for iPhone”, and the categorisation was apt; the device was really a cheaper version of the iPhone with less uses.

The first iPad further crowded the market in 2010, and in 2017, Apple discontinued the iPod shuffle and nano, leaving the iPhone-replica-like iPod touch as the sole representative of the iPod range.

But Apple was never afraid of cannibalising itself.

In 2013, Apple CEO Tim Cook saw self-cannibalisation as a “huge opportunity” for the company.

“One, our base philosophy is to never fear cannibalisation. If we do, somebody else will just cannibalise it, and so we never fear it,” he said.

“We know that iPhone has cannibalised some iPod business. It doesn’t worry us, but it’s done that.”

In 2015, Apple’s then-head of marketing, Phil Schiller, said it was “almost by design” that each Apple product had to fight for a place among the company’s offerings.

Even though the latest updates to iPhones have been nowhere near revolutionary, with new features coming mainly in the form of speed and camera quality, it was inevitable iPods would eventually find themselves on the chopping block.

And with Apple predicting the current global microchip shortage will continue to hurt the company’s production and sales, it makes sense the time is now.

iPods are still available to buy while stocks last, but this week’s announcement brings a quiet death to one of Apple’s foundational products which had a lasting effect on how people around the world consume music today.

Labor victory fires up Tamil family’s hopes of return to their Biloela home
Perth residents urged to play it safe as massive storm rolls across region
Joe Biden says he’s not fussed by North Korea’s rumoured return to nuclear tests
ACTU hails Labor’s triumph as the first step to pay raises
Analyst: Sharemarket will be anxious about a Labor pact with Greens
French foreign minister hails defeat of Morrison and his ‘notorious incompetence’
Kirstie Clements: Forgot how to pack for a trip? Choose comfort over the snazzy stuff
Today's Stories