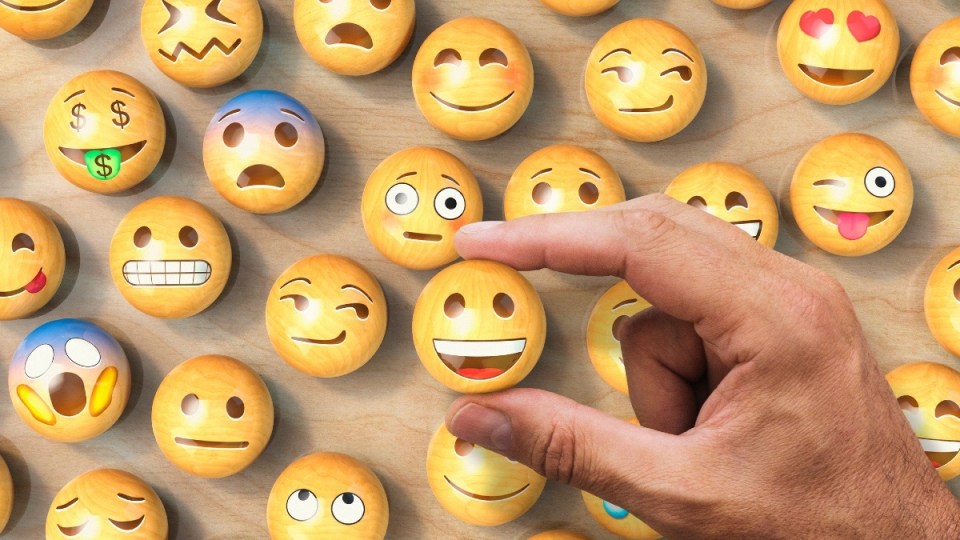 To avoid miscommunication and confusion, be economical with your emoji use. Photo: Getty

When four women gather round a coffee table laden with half-finished lattes and barely sipped juices and a mobile phone is holding centre-stage, it can only mean one thing …

One of these women has summoned her girlfriend taskforce to decode a text message from a romantic interest.

I am honoured to be one of them. Texts between my friend and a work
colleague are shared.

Hey [name retracted] it was nice hanging outside after work. Keen for a drink next week?

To which he responded:
Drinking sure is fun. 😉 [Wink face emoji]

The task force is stunned.

“Is this a polite decline, or an equivocal acceptance?” said one friend.

“Why is he focusing more on the drinking part than on you?” said another.

One friend summons the courage to voice what we are all thinking:

“What the hell does that wink-face emoji mean?”

Understanding the semiotics of emojis is a necessary component of dating in the modern era. Globally, messaging – including texting, WhatsApp, and Instagram Messenger – is the most popular form of non-verbal communication.

In Australia, it is estimated that 85 million texts are sent every day. Accompanying these messages are ceaseless opportunities for emojis.
And people aren’t afraid to use them – five billion emojis are sent globally on Facebook Messenger alone every day.

With so many emoji-laced messages it’s probably inevitable that meaning will be lost in translation.

Emojis were designed to convey thoughts and feelings that may not be expressed or might be missed during digital communication. But they can often result in mixed messages.

A 2017 Science Direct psychological study included interviews of controlled participants about their interpretation of emoji use within a romantic text exchange.

The study found that overwhelmingly people who received negative text messages, followed by an emoji, interpreted the message as positive, despite the negative written content in the message.

However, synchronised emoji use, especially in the early period of courting someone, can be an important factor in establishing a romantic connection.

In 2020, Poetics Journal analysed emoji use in dating apps. The study found that when two individuals attune their emoji use, it is likely that their dialogue will continue and increase in flirtatious content. The analysis also revealed that if one participant failed to match the other’s emoji use, feelings of rejection are more likely to result.

So, what to do if you are a pen-and-ink girl in an emoji world?

In romantic exchanges it is important to derive your meaning from the written word, not the subsequent emoji. Extrapolate emojis from their digital landscape, think of them as miniature, undecorated works of art.
Different people project different meaning on to art, just as we do emojis.

Therefore, a wink face may signal to you irony, but it could signal to someone else sexual flirtation.

To avoid miscommunication and confusion be economical with your emoji use, unless you have formed a sustained and understood emoji pattern with your love interest.

At the end of the day, decoding the written word is hard enough without the inclusion of mini, computerised artworks.

Approach with extreme caution: The art of flirting using emojis 🥺