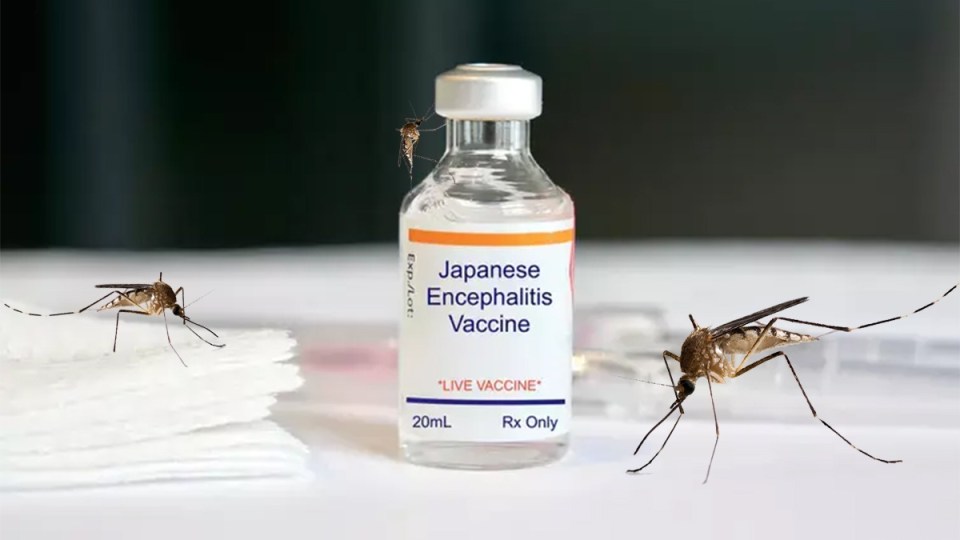 Australia is dealing with its first-ever major Japanese encephalitis outbreak.

There have been 20 confirmed cases in humans so far, and two people have died.

Around 99 per cent of people infected with JEV will have no or very mild symptoms. But in less than 1 per cent of cases, it can become serious.

What is Japanese encephalitis?

JEV is an infection that can be transmitted to people if they are bitten by a mosquito carrying the virus. It can’t be transmitted from person to person.

Mosquitoes become infected if they bite an infected bird in the wild (usually wetland wading birds) or an infected mammal such as a pig.

Pigs are the greatest risk as a source of infection to people because they get very high levels of the virus in their blood when infected. Mosquitoes bite infected pigs, and then bite humans, infecting us.

But people don’t get infection directly from interacting with pigs or eating pork, because JEV is transmitted only by mosquitoes.

There are many other infectious causes of encephalitis. The specific features of the disease depend on the cause, but these features often overlap. Diagnosis of a specific cause can require testing of multiple samples on repeated occasions.

Diagnosis of JEV encephalitis requires direct detection of the virus by ‘PCR’ test in blood or in the fluid surrounding the brain or spinal cord, which is sampled from the lower back.

Or, it can be detected through the body’s response to the virus by testing for immune proteins (called antibodies) in the blood or in the fluid surrounding the brain or spinal cord.

What does JEV do to your body?

If a person is bitten by an infected mosquito, the virus is injected into the skin. The first cycle of replication then begins inside our skin cells.

The virus is then transferred to the local lymph glands, for example, under the arm or in the neck. This process lasts around a week. The infection can be stopped by our immune system at this point.

A second cycle of replication may result in the virus being spread through our bloodstream. Again, the virus can be stopped by our immune system in this phase, but this phase may be associated with symptoms like fever, rash, aches and pains, vomiting or diarrhoea. This phase lasts around one to four days.

When JEV spreads in the bloodstream, the virus can cross into the brain or spinal cord. This happens in less than 1 per cent of infections, but if it does, JEV efficiently replicates in the brain and spinal cord.

The virus itself, and the inflammation that results, alter the functioning of the brain and spinal cord, often irreversibly.

The key symptoms include:

Inflammation also leads to swelling, and swelling of the brain in the enclosed skull can lead to death.

All forms of encephalitis can be severe and result in brain injury, but JEV has shown itself to be one of the more severe forms, and potentially more severe in young children than in adults. For the 1 per cent of people where JEV infection develops into encephalitis, it causes death in around 20 per cent of cases, and around half of survivors will have some kind of neurological disability.

What should I do if  exposed?

Exposure to mosquitoes in and around those parts of NSW with large pig populations is the main risk, although at present only a relatively small number of cases have been identified in Australia.

If you think you have been exposed and have developed any of the symptoms, you need to see your doctor. If you or someone you know has the more severe symptoms of encephalitis, you need to seek urgent assessment.

Unfortunately, there are no specific treatments that have proven effective in treating JEV. However, high-quality supportive care available in Australian hospitals does improve outcomes.

Prevention is better than cure. So, now’s the time to do what you can to avoid mosquito bites.

Also, there are effective vaccines. State and federal public health authorities are currently working on how these may be best used to control the current outbreak and prevent disease.

At the moment, the vaccine is free and has been prioritised for certain groups including people:

The danger of Japanese encephalitis is real, but the good news is that the virus is rarely lethal