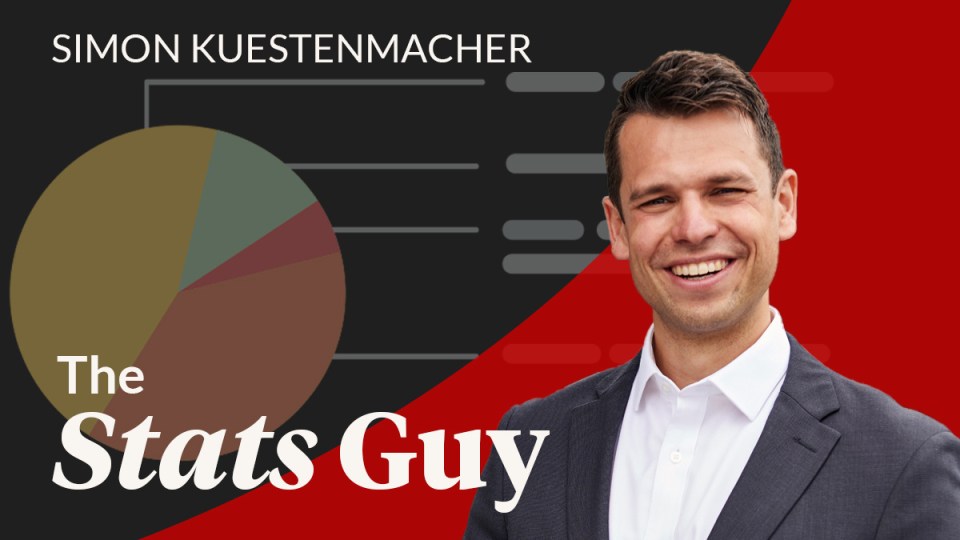 Since Russia will be dominating the news around the world for the foreseeable future, it’s time to familiarise ourselves with a few basic demographic statistics.

This will help us interpret current affairs and might even help us understand Vladimir Putin’s game plan a little better.

Russia produces about the same economic output as Australia (GDP of around US$1.6 trillion), despite having a population roughly six times the size (146 million, compared to Australia’s 26 million).

While Russia is the ninth-largest country by population it only features the twelth-largest economy.

Russian GDP was terribly low and zig-zagged after the collapse of the Soviet Union. After Putin introduced liberal market reforms around the start of the millennium, GDP increased sharply but peaked in 2013.

Where would you rather live?

Russia is home to 11 million migrants (almost exclusively from former Soviet satellite states), who make up eight per cent of the population.

Australia is home to eight million migrants who make up 30 per cent of the population. Russia isn’t viewed as an attractive destination.

But we are digressing. What is Russia spending its GDP on? Lots of things, but most notably on defence.

Russia spends twice as much as Australia on its military (4.3 and 2.1 per cent of GDP). According to military analysts, Russia gets more value for every defence dollar too.

Russian military wages are lower, and equipment is manufactured locally or purchased at much lower rates than in Australia. It’s also speculated that Russia finances impressive offensive cyber capabilities that aren’t accounted for publicly.

He was one of three million Russian babies born in 1952 and will turn 70 this year. Throughout the 1950s and well into the 1960s, Russia grew its population by well over a million people per year.

In 1999, Putin came into power and the Kremlin successfully introduced Mother and Child programs that amped up the birth rate from an incredibly low 1.157 kids per woman in 1999 to a rather impressive 1.777 in 2015.

Since then, the birth rate dropped but stabilised at around 1.5 (pretty much mirroring the European average). In, 2021 only 1.4 million babies were born in the country.

In the 1990s and early 2000s, a lot was written about the demographic decline of Russia. Putin’s success in increasing the birth rate helped to slow the population decline.

Russians aren’t as old as you may think – but for all the wrong reasons.

Male life expectancy fell to an unbelievably low 57 years in 1994 (71 years for women – no nation on the planet saw a larger gender gap in life expectancy). This was driven by large-scale alcoholism.

The narrative of an ageing Russia suggests that we see more people aged over 70 in Russia than in Australia. Here is where the low life expectancy of Russians comes into play.

Many of today’s potential elderly Russians simply died decades ago. Today only 9.7 per cent of Russians are aged 70+ (compared to 11.4 per cent in Australia). This will change in the next 15 years though when the big bulge of 55-to-69-year-old Russians are entering retirement.

This leaves Russia with higher costs and a smaller workforce.

Retirement ages were hiked in 2019 to ensure a sizeable workforce will remain as Russia faces serious ageing in the 2030s. The Kremlin also tried (not overly successfully) to increase migration to grow its population base.

Another way to grow Russia’s population is to take new populations by force.

The demographic decline wasn’t reversed permanently under Putin’s leadership, but it led to a temporary mini population boom from 2008 to 2019. This mini-boom has now ended, and Russia faces decades of slow population decline.

Not all segments of the Russian population are declining though.

Probably the most important demographic for Putin’s plans would be men aged between 18 and 27. As of 2021, that’s the military conscription age and every Russian male must serve at least one year in the army.

Throughout the 2020s and 2030s, this all-important age group is only going to grow (from 7.3 million men in 2021 to 9.6 million men in 2039). From a military perspective, a demographic decline in Russia is still two decades away.

Let’s put all of this together now. Putin is thinking of himself as the leader for life which, in his case, easily translates to another 15 to 20 years. Any legacy project must be completed within this time frame.

Putin doesn’t want to be remembered simply as a leader stabilising a struggling and shrinking country. That’s not enough in his mind. He views himself in line with the great conquerors of history, a gatherer of Russian lands, so to speak.

Putin views the Western democracies with contempt, has seen them fail in Iraq, Afghanistan and Syria. America, the old global superpower, is hopelessly divided, and an ex-president even complimented Putin’s interventions in Ukraine.

China, the new global superpower, appears to have agreed on terms of sorts before the invasion of Ukraine. Europe doesn’t have a functioning army and appears to avoid direct military confrontation.

Putin must view this as an ideal time to pursue his legacy project. Russia will be facing very unfavourable demographics in the late 2030s, but for the next decade and a half, a demographic window of opportunity exists.

Russia just came out of a mini population boom, the country is over 15 years away from facing the problems an ageing population brings with it, and the male population of conscription age is going to massively increase over the next two decades, providing him with the manpower for prolonged military engagements.

Never mind that war is unlikely to improve the average Russian’s living conditions. The autocrat bid his time, tested the waters with several minor military interventions, waited for and created a beneficial geopolitical environment and, with favourable demographics in his back pocket, will pursue his own legacy.

The Stats Guy: What the numbers are telling us about Putin’s Russia