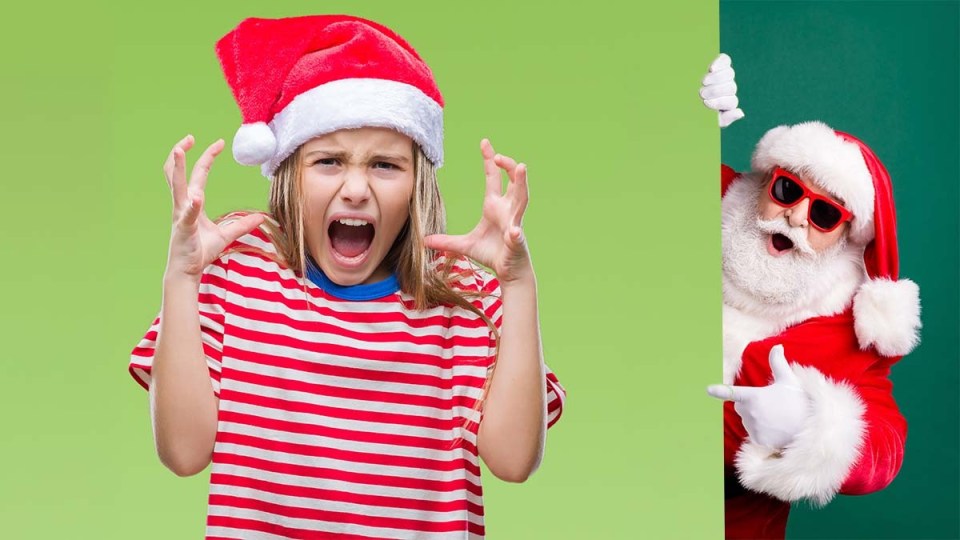 What do you mean he's not real?! Photo: TND

Part of the great joy of Christmas can be keeping its magic alive for children, but sometimes that bubble is burst sooner than we’d like.

That was the case earlier this week, when an Italian church was forced to apologise after a bishop told a group of children that Santa Claus was not real.

Bishop Antonio Staglianò of the Noto Roman Catholic diocese in Sicily was trying to highlight the meaning of Christmas by sharing the true story of Saint Nicholas.

He also told the kids the red suit was a marketing ploy by Coca-Cola.

Parents were furious with the clergyman for shedding light on The Big Lie and the diocese had to issue a formal apology, BBC has reported.

But let’s face it.

Parents might be clinging to the magic on behalf of their youngsters, but at some point the North Pole scandal will be uncovered.

A friend at school, an overheard conversation, or wrapping paper suspiciously similar to the roll sitting on the kitchen bench.

These are all clues that something is just not right about the jolly man with the beard, and children will eventually start asking questions.

But how do we have this inevitable conversation without destroying the magic of Christmas?

About two weeks ago, Dr Justin Coulson started a row when he posted six reasons to “stop lying to kids about Santa” on his Happy Families Facebook page.

Dr Coulson flagged the post as an “unpopular opinion”, and sure enough about a week later Mamamia executive editor Leigh Campbell had put him on blast over it in an opinion piece.

Among her reasons for keeping the Santa lie alive, Campbell said, was that it had not put her or any of her friends in therapy.

Educational and developmental psychologist and senior lecturer at Monash University Kelly-Ann Allen told The New Daily that getting caught up in the “truth or lie” debate can be a bit simplistic.

She has written about the positive impact the Santa ritual can have on  young children, including memory-making, and does not see harm in it.

Dr Allen said she has seen no evidence young people are negatively impacted by the Santa myth, but it is important for families to be guided by their own beliefs and values.

“Many parents believe that when their children are old enough to ask, it’s time to tell them,” she said.

Psychology Professor Chris Boyle, who ran the survey, said one of the main reasons children lose their faith in Santa is because of mistakes by “bumbling parents”.

A surprising 34 per cent of adult respondents said they wished they still believed in Father Christmas and 56 per cent said their trust in adults had not been affected when they discovered the truth.

Senior lecturer in Philosophy and Education at University of Queensland Peter Ellerton told The New Daily he does not think lying about Santa Claus is necessary to have a magical Christmas.

It’s not a good idea to lie about Santa, but that doesn’t mean you can’t talk about him in the context of a myth, he said.

“Is it the only way to get kids excited about Christmas time [or] establish traditions? I very much doubt it is,” Dr Ellerton said.

“You can talk about the story of Santa Claus, but that is very different to saying there is one who does these things.”

Even though the realisation that Santa is not real is usually not traumatic, it can still be hurtful, he said.

This tracks with the Santa Survey, which found 15 per cent of respondents felt betrayed by their parents when they discovered the truth.

Kids understand the inconsistencies of the Santa story. They see that poverty still exists even for children who should be on the ‘nice’ list.

“Kids aren’t stupid. They can figure these things out and they can see those discrepancies,” he said.

Dr Ellerton is not advocating for a Santa cull, but he encourages parents to tell children about the story without perpetuating the lie.

“You don’t have to open with Santa is a lie,” he said, but it’s a good opportunity to talk with them openly about the story of Santa.

And when kids come home and say they have heard that Santa is not real, this is an opportunity to ask what they think rather than double down in Santa’s defence, he said.

He encourages parents to help their kids to think independently.

If you have actively talked about the story of Santa, without outright lying to them by saying he is real, it will be easier to have those conversations, he said.

How do we avoid our kids becoming the Grinch?

An honest conversation about the myth of Santa could include acknowledging that some people, particularly other children, do believe the story is real.

Dr Ellerton said this is a good opportunity to ask your kids if it is “our job” to tell people otherwise.

“Most of these problems are resolved by being open with children,” he said.

Meanwhile, Dr Allen said this might be the moment to give children a new role in keeping the “magic alive” for younger kids and siblings.

As for the wised-up children, there are other ways to make sure Christmas is still magical.

“Some families will visit the Christmas lights together, others will share a meal. If families are seeking to maintain ‘magic’ they could think about the rituals and memories they would like to create and cherish,” she said.

Both experts agree that we can celebrate the Santa myth and play with the idea even when we know it is not a true story.

“I know a 56-year-old who still gets a present from Santa. Each year his 80-year-old Dad asks him what he wants from ‘Santa’,” Dr Allen said.

How to be honest about Santa, without destroying the magic