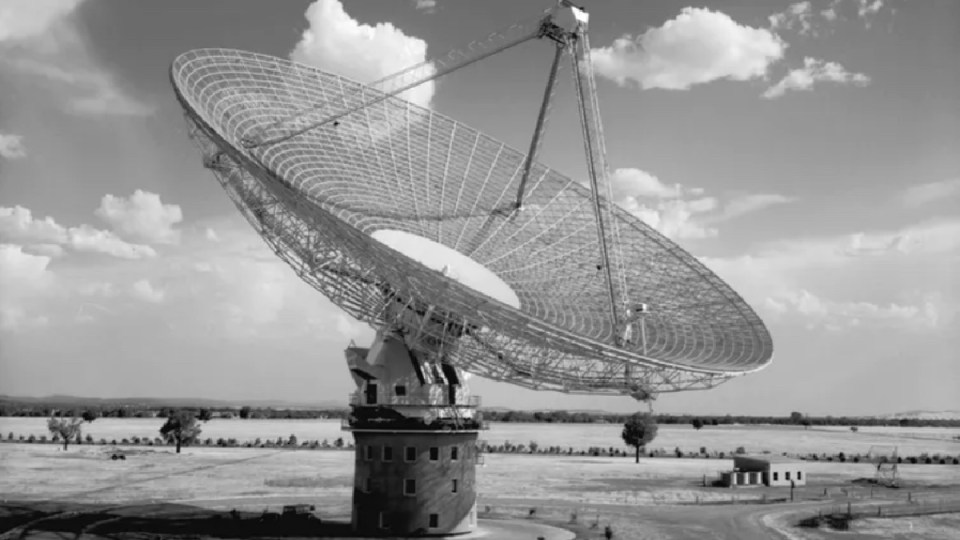 The CSIRO’s 64-metre Parkes Radio Telescope was commissioned on October 31 1961. At the time it was the most advanced radio telescope in the world, incorporating many innovative features that have since become standard in all large-dish antennas.

Through its early discoveries it quickly became the leading instrument of its kind. Today, 60 years later, it is still arguably the finest single-dish radio telescope in the world. It is still performing world-class science and making discoveries that shape our understanding of the Universe.

The telescope’s origins date back to wartime radar research by the Radiophysics Laboratory, part of the Council for Scientific and Industrial Research (CSIR), the forerunner of the CSIRO. On the Sydney clifftops at Dover Heights, the laboratory developed radar for use in the Pacific theatre of war. When the Second World War ended, the technology was redirected into peaceful applications, including studying radio waves from the sun and beyond.

While the group’s initial research focused on radio waves from the Sun, Bolton’s attention soon shifted to identifying other sources from farther afield. By the early 1950s, the Dover Heights radar dishes had discovered more than 100 sources of radio emissions from the Milky Way and beyond, including the signals from supernova explosions. These observations established the Radiophysics Laboratory as a world-leading centre of radio astronomy.

By 1954, the technology at Dover Heights was outdated and obsolete, prompting Bowen to initiate the next step for Australian radio astronomy: a state-of-the-art new radio telescope.

He decided the most versatile option was to build a large, fully steerable dish antenna. The eventual price tag was A$1.4 million (A$25.6 million in today’s terms) – far beyond CSIRO’s budget at the time.

The Menzies government agreed to fund the project, provided at least 50 per cent of the money came from the private sector. Using his wartime contacts, Bowen secured A$250,000 each from the Carnegie Corporation and Rockefeller Foundation, plus a range of private Australian donations.

British firm Freeman Fox and Partners produced the detailed design, incorporating suggestions from legendary engineer Barnes Wallis, of “Dambusters” fame. Based on the available budget and desired functionality, a diameter of 64 metres was agreed for the dish.

The telescope’s construction began in September 1959 and was completed just two years later. On October 31 1961, the Governor-General William Sidney, Viscount De l’Isle, officially opened the telescope in a ceremony attended by 500 guests.

John Bolton was appointed the founding director of the telescope. Under his dynamic, decade-long tenure, astronomers made a string of significant discoveries that established the dish as the premier scientific instrument in Australia.

Astronomers revealed the immense magnetic field of our Milky Way galaxy. A few months later, the telescope detected quasars, the most distant known objects in the Universe – a discovery that increased the size of the known Universe tenfold. To cap off a memorable first year, Parkes tracked the very first interplanetary space mission, Mariner 2, when it flew past Venus in December 1962.

In the 1970s, researchers discovered and mapped the immense molecular clouds interspersed through our galaxy. The study of pulsars – rotating stars that emit beams of radio waves, rather like a lighthouse – became a major field of research. Parkes has discovered more pulsars than all other radio observatories combined, including the only known double pulsar system, spotted in 2003.

In the 1990s, the distribution of galaxies was mapped to a distance of 300 million light years, revealing the complex structure of the Universe. More recently, Parkes discovered the first Fast Radio Burst – a short, intense blast of radio waves created by an as-yet unknown process. The telescope has also been involved in the Search for Extra-Terrestrial Intelligence (SETI), including the ten-year Breakthrough Listen project, which began in 2016.

To the public, the telescope is perhaps best known for its space tracking, especially its role in the Apollo lunar missions. But it has also supported other significant missions such as NASA’s Voyager 2, which flew past Uranus and Neptune in the 1980s and crossed into interstellar space in 2018. In 1986, Parkes was the prime tracking station for the European Giotto mission to Halley’s Comet. And next year, Parkes will track some of the first commercial lunar landers.

Originally intended to operate for 20 years, the telscope’s longevity is a result of constant upgrades. Recent improvements include a new ultra-wideband receiver that can scan a huge range of radio frequencies, and CSIRO-developed “phased array feeds” (PAFs) that allow the telescope to observe up to 36 points in the sky at once.

Work is now under way on a cryogenically cooled PAF that, when installed in 2022, will double this number. With these upgrades in place, a single receiver can be used to deliver more than 90 per cent of current Parkes operations.

Parkes has maintained its world-leading position in radio astronomy by constantly adapting to meet new requirements. Today it stands as an icon of Australian science and achievement. Sixty years after it first trained its eye on the sky, the future still looks bright at Parkes.

Sixty years after it first gazed at the skies, the Parkes dish is still making breakthroughs