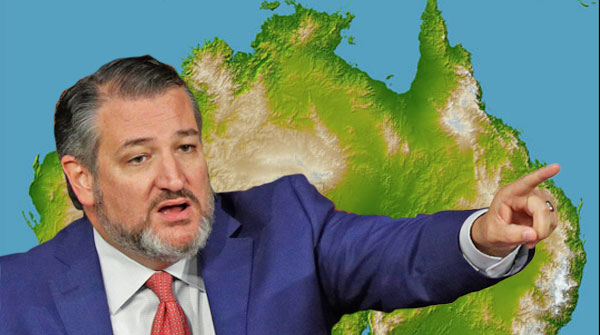 Everything is bigger in Texas – including their COVID-19 death toll of 70,000+, writes Tim Ferguson.

Anti-factsers expected lockdowns would turn Australia into a totalitarian regime, Reich it or not.

A conspiracy theorist struggling to hide in a hi-vis jacket said, “Since the lockdowns ended, street marching is not the same – there’s too many passers-by passing us by. We will now protest by staying at home watching the Home Shopping Channel”.

Neighbourhood Nazis are in two small minds about it. They will keep marching for the freedom to take away everyone’s freedom.

Prince William has ended global warming by arriving at the Earthshot climate change event wearing a green velvet jacket he wore at an event in 2019.

He encouraged the people of the world to wear their high-end tailored garments more than once.

A scientist declared that global warming is caused by awards ceremonies.

A spokeswoman said, “Each week in the United Kingdom, landfills are filled with clothes worth $195 million. We can reduce this by making clothes cheaper.”

POLL THE OTHER ONE

“Our margin of error takes up most of the page!”

Pollsters typically interview 1500 voters with landline phones who will talk to strangers. This narrows the field to older people and chatty toddlers.

Poll proponents are suggesting a referendum on polls but polls show that no-one is interested in referendums.

A ‘lack of opinion’ poll found that pollsters were generally undecided.

“In Texas, we don’t jab people’s arms, we arm their arms with arms.”

Cruz called Australia “the Texas of the Pacific” and other offensive things.

And everything else is bigger in Texas except for the Northern Territory which is twice as big as Texas.

“You know nothing about us!” Michael Gunner tweeted at Cruz. Gunner is Chief Minister of the Northern Territory and a member of the centre-left faction of the Labor Party, both good reasons why his comment was ignored.

The Ferguson Report: Scientist declares that global warming is caused by awards ceremonies