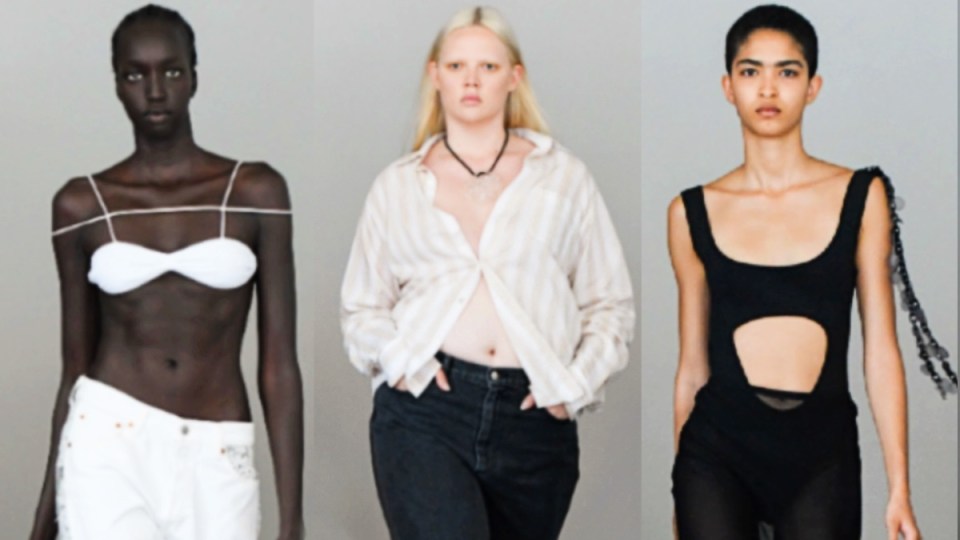 The midriff is back in a big way as the fashion world decides skin is in. hoto: Madison Voelkel / Courtesy of Maryam Nassir Zadeh

Of course it was going to happen!

We’ve been locked down, anxious and confused, in a world that abruptly shifts and changes from one day to the next, so the fashion runways were bound to reflect this.

At the ready to wear that just wrapped up in Paris earlier this month, designers weren’t showing a redux on the comfy basics we’ve been living in for the last two years. There were not a lot of soft, fuzzy clothes presented, items to wrap yourself into and cocoon in to lick your wounds.

The message was “We are back, baby!” and many of the lazy and unhelpful motifs that designers think make women look sexy – exposed midriffs, cut outs, skin-tight unitards, irrationally high-heeled shoes, bras as tops and micro miniskirts.

Skin is in. Miuccia Prada had slashed workwear with scissors to expose the torso, a metaphor for the destruction of corporate life as we knew it.

It was a valid comment, and there were beautiful, wearable pieces in the collection, like blue cotton shirts, duster coats, slouchy cotton pants and beaded-skirt suits, but it was the sea of taut, lithe midriffs that grabbed my attention.

In a world where body positivity is championed, are we now willing to let it all hang out if we don’t have washboard stomachs?

It is such a sensitive area for women – and men too, I would suggest. I’ve never had a flat stomach, never in my life. Most of my weight goes straight there, and that is even truer around the time of menopause, as most women will attest.

If someone ever touches my ‘belly’ (and I loathe that word with a passion) I will react as if I was Tasered. The only time I liked my stomach was when I was pregnant with twins and looked like the Hindenburg, something random strangers liked to point out to me around month six.

I do think other people’s midriffs look spectacularly sexy, but not mine. I literally marvel at seeing a flat stomach. I’m mostly thinking “Wow, where has she put all her internal organs?”.

Imagine sitting in a bikini, getting up and having a series of creases in your taut stomach, not a fold? I’ve been rewatching the entire backlog of Sex In The City as I missed most of it first time round due to work/life/children.

Given that they are at brunch, lunch or dinner and clutching a cocktail most of the time, they all had the most spectacular flat midriffs. Carrie’s (Sarah Jessica Parker) was on display most of the time, in some of the weirdest outfits ever put together.

It was Carrie who rocked the ‘belt on a nude waist’ look that has now been re-introduced to the current season, and I’m wondering if this fab new generation of size-inclusive rebels will take it up.

I do hope so, because decades of sucking in your stomach is exhausting.

Kirstie Clements: Skin is in – the return of the mini, the midriff and platform shoes