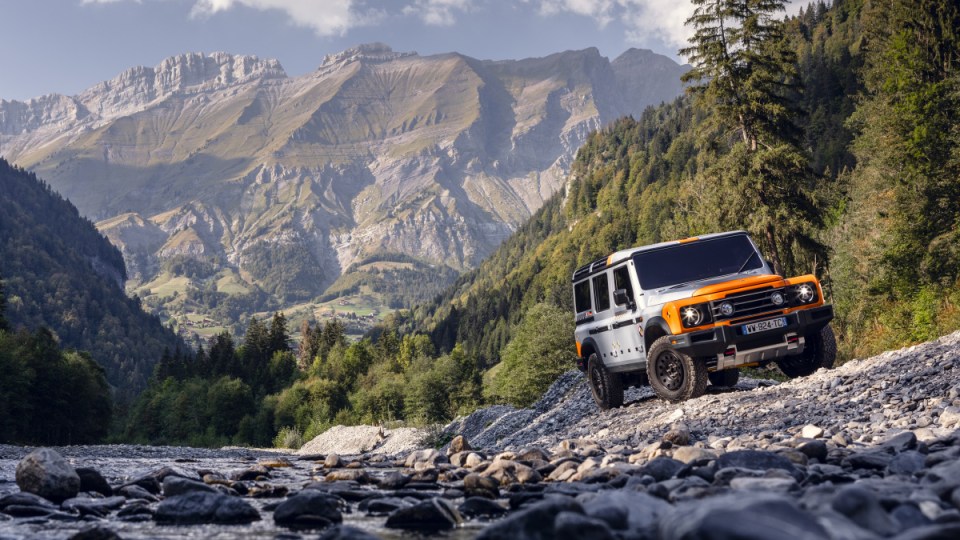 The Ineos Grenadier will be priced from $84,500 when it debuts in Australia next year.

It’s not electrified and it won’t have a five-star safety rating, but a new British 4×4 first sketched out on the back of a beer mat in an English pub is one of the most eagerly awaited automotive debuts of 2022.

To be priced from about $84,500 when it arrives in Australia late next year, it’s called the Ineos Grenadier and you don’t have to squint much to see the resemblance to the Queen’s favourite car, the Land Rover Defender.

And that’s very much intended.

When Ineos boss Sir Jim Ratcliffe heard the rustic old Defender was going to be pensioned off in 2016 and replaced by a far more sophisticated new generation, he decided something had to be done.

As the owner of the Ineos chemical group and one of Britain’s richest men, the billionaire certainly had the resources to do more than simply rue the passing of an automotive legend.

Hence the creation of Ineos Automotive and the development of the Grenadier, named after that pub in London’s Belgravia, where Ratcliffe first doodled his concept for a 4×4 wagon.

Ratcliffe has been happy to spend up on his passion project and tap some big-name suppliers. BMW engines will sit under the bonnet, tractor maker Carraro will provide the tough off-road beam axles and Recaro is helping out with the interior.

It will be built at a former Mercedes-Benz factory in France. Mind you that’s controversial, because the Grenadier was originally going to be manufactured on a greenfield site at Bridgend in Wales.

Ratcliffe copped plenty of criticism for that change, especially after being a strong supporter of Brexit.

“Today, we can see his claims are as hollow as his promise,” Welsh Labour MP Chris Elmore said when the decision was made in December.

But Ratcliffe has been as good as his word about bringing the Ineos Grenadier from daydream to 2.5-tonne reality, despite delays forced by COVID.

Production is scheduled to begin in the second quarter of 2022 and 25,000 Grenadiers are expected in the first 12 months.

Of that lot, 1000 Australian deliveries are expected in the first 12 months beginning in October 2022.

The price leader will be a two-seat commercial van, but a more expensive five-seat wagon will launch at the same time. A dual-cab ute will come later.

Both van and wagon will come with 3.0-litre turbocharged petrol and diesel engines and eight-speed automatic transmission.

Pricing will not vary by fuel type, which is significant because diesels are usually more expensive.

It will go seriously off road and it will tow big loads.

But given the entry price, many examples will spend their working lives posing in our more affluent suburbs. It’s telling the only Melbourne Ineos dealer will be in ritzy seaside Brighton.

“What we hope is people will use it for a purpose and whatever that purpose it is there to serve,” Ineos Australia boss Justin Hocevar says diplomatically.

Its most logical opposition in Australia is the Toyota LandCruiser 70 Series, the blue-collar relation of the more famous LandCruiser wagon.

While the Grenadier will just nibble at the edges of the 70’s sales volume, it will have its own selling points and character, Hocevar insists.

“We offer an automatic. We’ll offer really a comprehensive range of safety equipment. We’ll offer a range of other features that you might not find in some of those competitors.”

Hocevar, a former BMW and Jaguar Land Rover executive who ran Renault’s Australian franchise for seven years, fits the Ineos mould having off-roaded across the outback and ridden a motorcycle from England to Australia.

“There’s really a lot of enthusiasm and people that have provided quite a lot of information about what they drive now and what they like about the Grenadier,” he insists.

Hocevar will have got a better sense of how much interest there was on September 30 when local reservations opened at $800 (refundable) a pop.

As the name suggests, plonking down your dollars reserves you the right to buy a Grenadier. It also means you’re likely to get the chance to a ride in a prototype currently in Australia for testing and promotional purposes.

Anyone turning up expecting socket will be disappointed. Electrification is a big deal globally – even in Australia – but Hocevar says Grenadier is unapologetically fossil fuelled.

“People that are interested in this category of vehicle still identify with internal combustion engines and that’s still at this point in time, the best solution to fulfil their needs,” he says.

Nor will there be a five-star rating from the independent safety authority ANCAP.

The Grenadier will be built tough, but it won’t have the latest electronic driver aids required for a top rating because they would interfere with its off-roading prowess.

“We’re going to build the vehicle to the highest safety specs that we can provide to our customers,” promises Hocevar.

“When people get to see the safety equipment of the vehicle, it won’t provide any restriction to its acceptance.”

Built for off-road action, the Ineos Grenadier goes back to the future