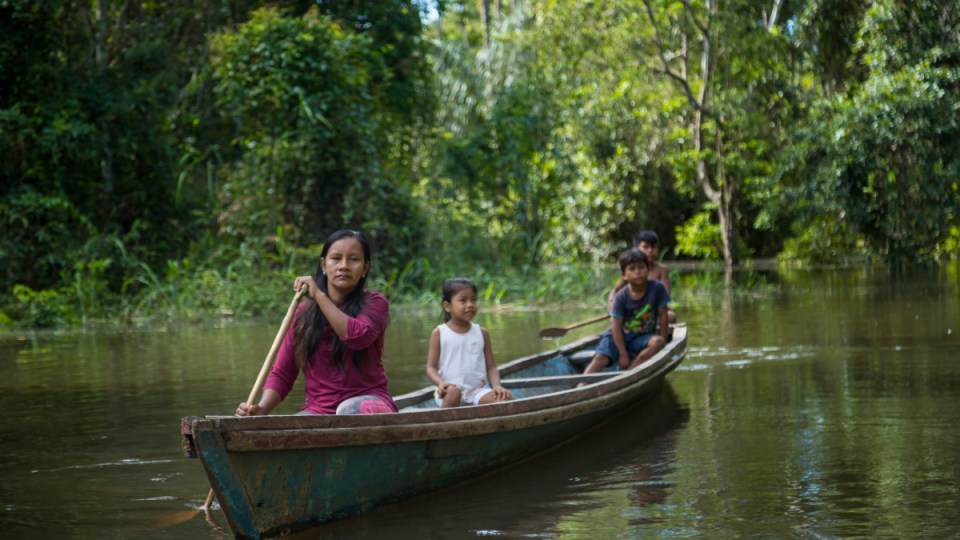 Liz Chicaje Churay was awarded for spearheading the creation of a national park in the Peruvian Amazon. Photo: Goldman Environmental Prize

As a teenage mother and activist, Liz Chicaje would travel by boat and foot across Peru’s Amazon rainforest with her young daughter campaigning to protect the ancestral lands of the Bora indigenous people from illegal logging and mining.

To preserve the forest that the Bora and other indigenous people depend on for hunting and fishing in Peru’s north-eastern region of Loreto, Ms Chicaje spearheaded the creation of a 809,370-hectare national park.

Ms Chicaje’s activism and leadership today earned her a prestigious Goldman Environmental Prize – known as the “Green Nobel” – which honours grassroots activism, along with five other winners.

“We live off the forest. It’s our wealth. If it wasn’t for the forests, we wouldn’t have the food and pure air that we breathe,” Ms Chicaje, 38, said.

“We all have to continue to advance in the protection of the environment and reforest areas.”

Ms Chicaje and other indigenous leaders worked with government officials, environmentalists and scientists, using satellite imagery to map areas that would be placed under protection.

She convinced other indigenous communities to endorse the park, and in January 2018, Peru’s government declared the creation of the Yaguas National Park.

With deforestation rates rising in parts of Peru’s Amazon, the national park is seen by environmentalists as vital in safeguarding ecosystems and carbon-storing peatlands and rainforest.

Announced in San Francisco, California, during an online ceremony, the Goldman Environmental Prize provides each of the six winners with financial support to magnify their environmental activism and continue local campaigns.

A Vietnamese conservationist working to save pangolins from the devastating multi-billion-dollar wildlife trade has won the Goldman Environmental Prize. https://t.co/RuZefD5Ekn

Among this year’s other prize winners are Gloria Majiga-Kamoto, a Malawian anti-plastics campaigner; environmentalist Maida Bilal from Bosnia-Herzegovina; American Sharon Lavigne, a campaigner against toxic waste and pollution.

‘They didn’t see it as a problem’

Ms Hirata’s work has focused on eliminating Japan’s old and inefficient coal-fired power plants – a major contributor to carbon and other emissions that fuel global warming.

After Japan’s Fukushima Daiichi nuclear plant was severely damaged in a 2011 earthquake and tsunami, the government closed many of the country’s nuclear plants and ramped up coal power, said Ms Hirata, who is the founding member of the Kiko Network, a local climate change nonprofit.

“We needed to start from zero. People didn’t really know anything about coal … they didn’t see it as a problem,” she said.

“There was no knowledge among the Japanese people where coal power exists, how many coal plants exist and the risks it has.”

As part of a national anti-coal campaign Ms Hirata began in 2011, a website was created to track new proposed coal plants, along with a network of activists living in areas where new coal stations were being planned, she said.

Working with scientists, academics, lawyers, journalists and local community leaders, Ms Hirata sought to raise awareness in public meetings and hearings about the negative impact of coal power on the environment and Japan’s pollution levels.

The campaigning paid off.

By 2019, Japan’s government had cancelled 13 planned coal plants across the country, averting the emission of about 42 million tonnes of carbon dioxide a year, the Goldman Prize committee said.

“When I see the map of Japan, and where [coal] projects were cancelled, those are mostly the areas where we mobilised local movements,” said Ms Hirata, adding that there are currently no plans to build any new coal plants in Japan.

Ms Hirata is now putting pressure on Japan to phase out the use of coal power altogether and to commit to only renewable sources of energy, such as wind and solar, by 2050.

But achieving this goal will be more difficult in a country where coal is seen as an important part of the energy mix, and where healthcare and economic issues often take priority over climate action, Ms Hirata noted.

Japan’s energy policy aims to have renewable energy contribute 22 per cent to 24 per cent of total power by 2030.

Currently, the country gets about 18 per cent of its electricity from renewable energy sources.

“We can’t just shout, ‘Do not build more coal plants!’ We have to show a solution for the people who are involved in the coal business,” Ms Hirata said.