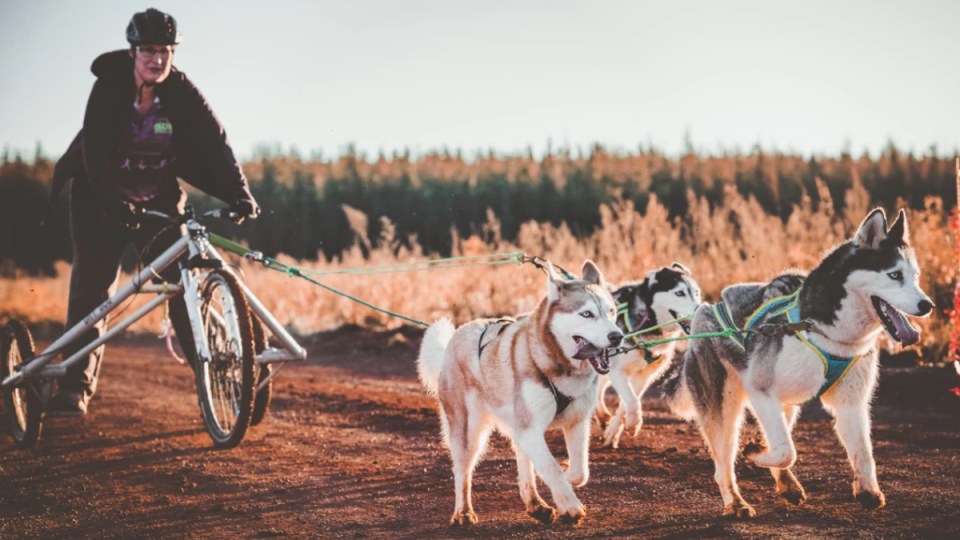 Does your dog love to run? Do they give your arm a workout when they pull on walks?

Maybe sled dog racing is the sport for them?

Gatton woman Emily Vourlides got involved in the “overlooked” winter sport when she was looking for an activity for her first husky pup, back in 2008.

“Most of us are here because our dogs love to run and they love to pull,” Ms Vourlides told ABC Radio Brisbane.

“If the dogs didn’t want to run, they wouldn’t run.”

“They just know instantly that they’re going to go for a run, and they get so excited.”

Ms Vourlides said it was relatively cheap and easy to get involved in the sport.

“For most people, you can get involved with your household pet or one or two dogs and the old mountain bike you’ve probably got sitting in the shed or garage,” she said.

“With the addition of some specialised gear, you could get started for just a couple hundred dollars.”

In Queensland sled dog racing doesn’t involve an actual snow sled, but participants can use anything from a bike, scooter, a rig or cart or can simply run alongside their dog in the canicross division.

Ms Vourlides said a qualified veterinarian was on site at every event.

There are different classes, or races, that people compete in and each depends on the number of dogs and your equipment.

“So six dogs wouldn’t be competing against one dog,” she said.

Ms Vourlides said often the bigger teams were made up of rescue dogs or dogs that were purpose-bred by a breeder.

“Generally, we do see smaller dog classes up in Queensland because of our dog laws.”

The length of each race varies and can range from anywhere between 2km up to 10km.

RSPCA Queensland spokesperson Michael Beatty said the animal welfare organisation was not opposed to the sport per se.

“However, the same considerations that apply to other sports involving animals and working animals in general would apply,” Mr Beatty said.

“These include how are the dogs trained, how they’re looked after when not training or competing, ensuring the equipment used doesn’t cause problems and cancelling events if the weather temperatures are too extreme.

“All of these considerations would already be covered by the equivalent of Queensland’s animal care and protection act in each state.”

Mr Beatty said while the RSPCA had not received any complaints in relation to the sport, he encouraged anyone with specific concerns to contact their state RSPCA.

What does it take?

Like any sport, sled dog racing requires a lot of training.

The dogs must be able to respond to specific voice commands, or participants could run into trouble.

“You can’t steer your dog except by command so we do teach … your left or your right, faster, slower, go and stop,” Ms Vourlides said.

“There is a fair bit of training but a lot of the dogs learn really well from coming and taking part.

“It is a lot easier for them to get the hang of it with other dogs around, rather than on their own.”

The sport runs from May to September and requires specific temperatures for the events to go ahead.

“It has to be below 15 degrees and that takes into account humidity as well,” Ms Vourlides said.

“In Queensland it really has to be below 10 or 12 degrees for us to be able to run and compete.

Ms Vourlides said the Queensland races tended to be away from the coast in places like Stanthorpe, Toowoomba, Blackbutt.

“Each event will run a heat on Saturday night and Sunday morning so we generally camp overnight.”

And with little to no prize money in Queensland, Ms Vourlides said the sport was purely about being active and social with your dogs.

“Makes a bit of a weekend out of it and there is some nice social time when we’re not racing, with friends and dogs.”

Who can take part?

All canines, great and small are welcome to take part but some breeds are better suited than others.

“As far as the rules go, [unless] a vet or a race organiser looks at your dog at the start line and says your dog isn’t fit to compete, there’s no real rule that says any dog can or can’t compete,” Ms Vourlides said.

“Of course, brachycephalic breeds, with the squished faces, often have trouble breathing so they’re not really ideal for the sport.

“Obviously, really tiny dogs aren’t very well designed for the hard pulling classes but the canicross, which is just trail running with your dog, is a really good one for any size or breed.

“Even bikejor, to an extent, is OK for some of the smaller breeds.

“But you probably wouldn’t want to enter your dachshund or your pug in that class.”

A dog must be at least 12 months old to take part but Ms Vourlides said for the bigger breeds that grow slower, it was recommended to wait until at least 18 months.

“They’ll start training the commands from the time they’re old enough to go for walks so by the time they get into a harness they know basically everything they need to know.”