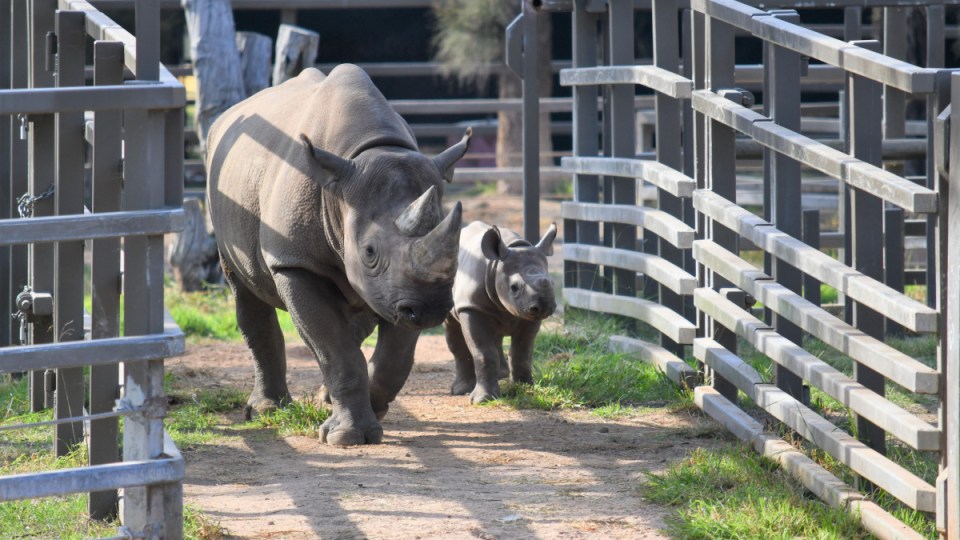 At just seven weeks old, black rhino calf Sabi already weighs 112 kilograms, and she’s just as energetic and full of life as any other newborn.

The critically endangered calf has made her first public appearance at Dubbo’s Western Plains Zoo.

She is the 15th calf born as part of the zoo’s conservation program, and the fourth to mother Bakhita.

The zoo’s black rhino keeper, Hayley Brooks, has been looking after Sabi, who she says is starting to experiment with solid foods.

“Sabi has been very alert in the exhibit paddock and seemed to notice unfamiliar faces, sounds and people when she first went out.

“She listened and watched intently, but took comfort and direction from her experienced mum.”

With only about 6000 black rhinos left in the wild, Sabi’s birth is a big part of the effort to protect the animal.

“We’re the only breeding institution in Australasia for the black rhino breeding program,” Ms Brooks said.

“Being a female, she will hopefully help continue this program herself by having her own calves.

“Gestation period is generally 15-16 months, so it’s quite a long wait for the calf to be born and they do only have one at a time.

“Having successful births is really crucial and Sabi is a very exciting one.”

“It’s definitely a safe spot for them to be,” she said.

“Obviously, conservation in the field is a huge consideration as well and here at the zoo, we support programs like anti-poaching patrols and community engagement in Africa and Asia.”

Sabi was named after a flower found in Zimbabwe, which blooms after drought.