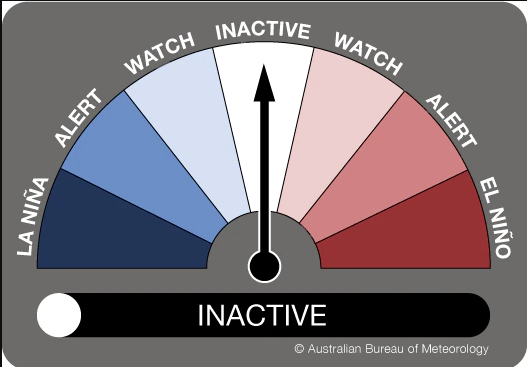 The major climate drivers over the Pacific Ocean have returned to neutral. Photo: Bureau Of Meteorology

The Bureau of Meteorology (BOM) has reset the El Niño Southern Oscillation outlook to inactive, meaning the 2020-21 La Niña is over.

BOM climatologist Naomi Benger stressed, though, that it did not mean it would be all blue skies for the foreseeable future.

“What it really means is that La Niña is no longer dominating our climate but other localised drivers will become the primary influencers,” she said.

“In particular, we’re expecting the Madden Julian Oscillation (MJO) to move through the Australian tropics, and that’s going to increase cloudiness and rainfall over the next week or two for northern Australia.”

The MJO is a climate driver that circles the equator encouraging and discouraging tropical rainfall.

When there is a burst in our region, it brings an increased risk of tropical low or tropical cyclone activity.

“The rainfall is certainly not over,” Dr Benger said.

How did the La Niña play out?

This La Niña followed a fairly typical pattern, forming in spring, peaking in summer and decaying in autumn.

It had a bit of a slow start, but it certainly ended with a bang with last week’s flooding of the east coast.

It is too soon for a full scientific comparative analysis, but this season certainly fitted into the pattern of La Niña bringing about wet conditions.

The oceans are also intertwined with the atmosphere, bringing enhanced trade winds across the tropical Pacific.

“Because the oceans around the Indonesian seas and the seas closer to Australia are warmer than normal, it tends to enhance evaporation and moisture to the atmosphere,” she said.

“So generally we see wet conditions associated with La Niña events in Australia, especially in the northern and eastern parts of Australia.”

La Niñas are usually associated with high numbers of cyclones – which hasn’t played out so far this year – but Dr Benger points out there have been lots of tropical lows, and there is still time left in the cyclone season.

Then there is all the rain from the past few weeks on the east coast.

Again, it is too soon for a full analysis but the rainfall and flooding has certainly been epic.

“It’s on track for being in the top five wettest Marches on record in New South Wales and the Murray-Darling Basin,” Dr Benger said.

What are the long-term trends?

“So it’s possible that the impacts associated with El Niños and La Niñas might be stronger in a warming climate,” she said.

On top of this, rainfall intensity is expected to increase as the world warms.

“It’s complicated, but putting it simply, you just have more moisture in the atmosphere and that can enhance the impacts over Australia,” she said.

La Niñas and El Niños do not follow a set pattern.

“A La Niña can develop after a strong El Niño. But if it’s a weak El Niño, generally there is no pattern to have a La Niña after,” Dr Taschetto said.

There is also no pattern for an El Niño to develop after a La Niña, so it will be down to the computer models of the forecasting agencies to predict what will happen next.

According to Dr Benger, the climate outlooks are strongly suggesting a neutral ENSO state for the coming months, with that high chance of above-average rain in the north.

BOM declares La Niña over, but that doesn’t mean the rain is done