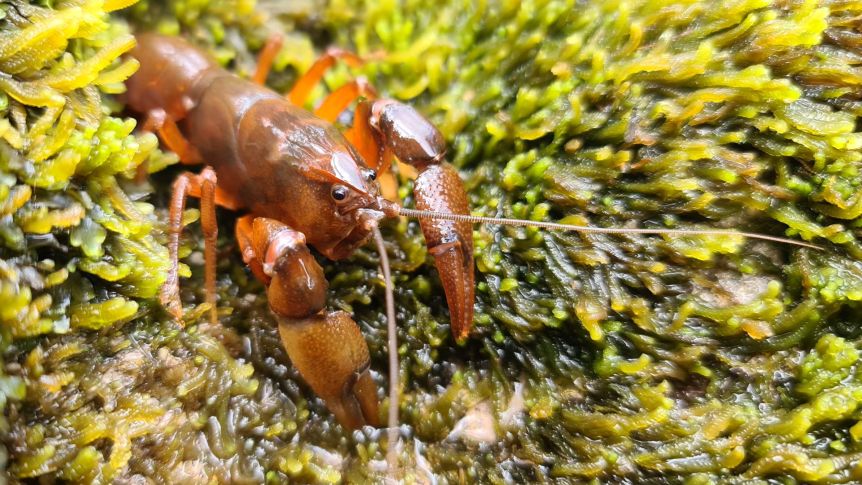 The small crayfish were found in the creeks that lead to Lake Burbury. Photo: Niall Doran/Bookend Trust

It was relatively early in his career when crayfish expert Alastair Richardson encountered the short-tailed rain crayfish.

He found a few back in the 1970s, while doing some collecting in the old King River Valley in Tasmania’s remote west.

He bottled the specimen all those years ago, but after decades of no sightings, the small cray was thought to be extinct.

“We had [found] six animals, they came from three localities, and two at that time were under Lake Burbury. And so the questions was, ‘Does it still exist?'” Professor Richardson said.

But a miraculous find has revealed the elusive critter is still scurrying about in the creeks that lead to Lake Burbury, a hydro-electric dam, close to where they had been found all those years ago.

It was not a serendipitous find for the associate professor – he was commissioned by Hydro Tasmania to see whether they were still hanging about, as part of a sustainability review.

“It hadn’t been found for a long time, we didn’t understand the status for it so we’d go out and look for it,” Hydro Tasmania environmental scientist Bec Sheldon said.

“Lake Burbury was developed in the ’90s, so we didn’t know what happened with the crayfish habitat since that time.”

Luckily, Professor Richardson knew exactly where to look for the crustaceans.

“We had a little clue from one of the earlier collections which said that the animals were found at the burrows at the edges of creeks,” he said.

“[We] hopped out of the boat, more in hope than expectation, climbed up a steep little creek and started turning over the roots and roots mats and moss at the edge of the creek, and lo and behold almost the first bit we turned over, here was a crayfish,” he said.

“Heart suddenly clutched, is this the one?”

“One of those was carrying eggs which of course is important because it means that this is a reproductively active and viable population,” he said.

“It was very exciting.”

Professor Richardson said he could not be too sure at first whether the crayfish he found were in fact short-tailed rain crayfish. The differences between similar species are very subtle.

“We were able to take a small amount of tissue from the animal, one of its back legs actually and have its DNA analysed, which confirmed that it was indeed the short-tailed rain crayfish,” he said.

He said the particular species of crayfish was almost certainly unique to this particular lake in western Tasmania.

There are question marks about the size of the population near Lake Burbury.

“There are maybe half a dozen or more creeks like this running off the mountain into the lake; we really need to look at all of those to find out how big the range of the animal is,” Professor Richardson said.

“Finding out the number is always difficult because you very often have to destroy their habitat or damage it to find out where they are and we don’t want to do that with a threatened species.

“They would certainly meet the criteria for rare on the Tasmanian Threatened Species legislation.

“Whether they’re threatened or endangered depends on the size of the population and whether there are any factors that are now causing their numbers to decline.”

He said the focus would need to be on making sure their habitat was secured.

“Probably the main threat that they face is climate change; these catchments are very tiny and if they start to dry, their habitats will be threatened,” he said.

Ms Sheldon said she would be working with the government to figure out how to proceed with the finding.

“It shows that our ecosystems are well and healthy. We’ll certainly be discussing the outcomes of this project with the Department of Primary Industries, Parks, Water and Enviroment, and with them and Alistair we’ll discuss next steps,” Ms Sheldon said.