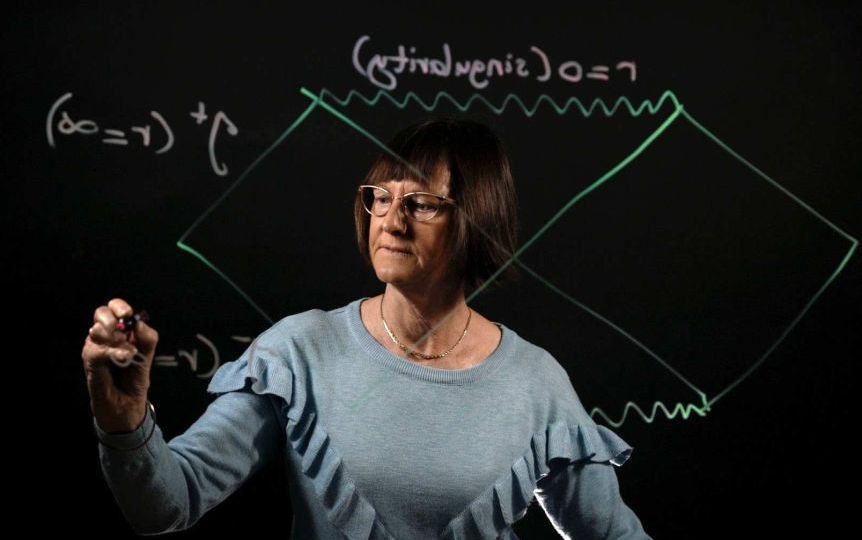 When Susan Scott first started looking for gravitational waves more than 25 years ago, many scientists were sceptical of finding anything.

Nearly 100 years after Einstein first proposed these tiny ripples in the fabric of spacetime existed, Professor Scott was part of a 1000-strong international team that finally detected them in 2015.

“That detection involved two black holes colliding and the two amazing projections from Einstein’s theory are black holes and gravitational waves and they came together in that one event,” she said.

Professor Scott of the Australian National University is one of four scientists – and the first female physicist – to be awarded Australia’s top science prize for their pioneering work discovering gravitational waves opening a new window to the universe.

“Australia has a presence in this field now because of the work we have done over more than 30 years,” said Professor Scott, who is a head investigator of the ARC Centre of Excellence for Gravitational Wave Discovery (OzGrav).

Australia is one of four nations that signed up to the Advanced LIGO Project, which made the historic discovery.

The field of gravitational wave research in Australia was kickstarted in the 1980s by Professor Blair, who built an early detector in Western Australia.

“This is something we spent a long, long time doing,” he said.

“But also we were doing this because we wanted Australia to be part of this discovery and it’s wonderful that this has been recognised.”

“This is a prize for physics in Australia.”

A model for women in science

Professor Scott heads a team of scientists who are instrumental in analysing the data and deciphering signals picked up by gravitational wave detectors.

She also led Australia’s efforts to follow up the detection of gravitational waves by optical telescopes to detect kilonova explosions created by merging neutron stars.

Professor Scott said she hoped the award will inspire young women to pursue a career in physics.

“It could have easily been the case that the four recipients were all males because that’s how the field was when I started out,” she said.

“I think it’s great for our young early career scientists to see … that they can go as far as they possibly can with their careers.”

The experimental physicist started her career working with Professor Sir Roger Penrose, who has just won a Nobel Prize for his ground-breaking work that proved black holes were possible according to Einstein’s general relativity theory.

But it wasn’t until she returned to Australia from the United Kingdom in 1990 that she thought she’d concentrate on gravitational waves.

“When I got to Canberra I got to thinking ‘Yeah, there’s something in these gravitational waves’.”

“I don’t think I would have embarked on it if I hadn’t convinced myself that the waves really were an implication of the theory,” she said.

Professor Blair has been developing technologies to detect gravitational waves for 40 years and set up a research centre at Gingin in Western Australia.

Research and technologies developed by Professor Blair and his team were instrumental in the detection of gravitational waves by the LIGO Observatory in 2015.

When Professor Blair started working on gravitational wave projects in the US in the 1970s he thought it would just take a couple of years.

“Never did I guess that 40 years later I’d still be trying to detect gravitational waves.

“Even now when you know how to do the calculations and can calculate their sensitivity it is still pretty hard to really believe we can measure these things,” he said.

He said the success of the amazing quest to find gravitational waves was a tribute to the hard work of an immense team of people and the support of his university.

It was at UWA where he worked with Peter Veitch and David McClelland.

Professor Veitch was one of Professor Blair’s PhD students.

Now at the University of Adelaide, his focus is on developing advanced lasers and optics now used in the Advanced LIGO detector.

One of the problems the LIGO Project faced, was that the high-powered laser beams used inside the detectors get slightly distorted as they travel through the instrument.

“We came up with this new technology that was able to measure these effects with the sensitivity … about a factor of 30 better than anything else in the world,” Professor Veitch said.

“We’re developing technology that did not exist until we came up with it,” Professor Veitch said.

“Fundamentally, it’s just great to see that Australia values its scientific contribution to this momentous event.”

He’s also pleased that the prize is recognising all four of them, although is quick to point out they represent a much larger team of collaborators.

“The four of us have been working together for quite a long time, but there have been many people that have worked with us as well,” Professor Veitch said.

“Within physics, if you want to work on these really big projects that answer quite fundamental questions, it is rare that it’s a single person or even a couple of people.”

Australia could lead the way in the future

Professor McClelland and his team pioneered optical and quantum technologies that enable components inside the detectors to work together in harmony, and made the LIGO detectors so sensitive they can detect a gravitational wave signal every week when they’re operating.

He said the prize is “a culmination of 30 years’ worth of effort towards one of the most exciting outcomes in the history of physics”.

“What we understand about the universe to date, has only been by looking at light and electromagnetic waves and some neutrinos.

“This is a new window to explore the universe,” Professor McClelland said.

Professor McClelland said the quartet was humbled to accept the prize on behalf of the Australian effort, and they hoped it would lead to bigger things in gravitational wave detection in Australia.

“In the long run, we would like to have one of these magnificent detectors onshore in Australia,” he said.

“Australia is one of the few places in the world where we can find sites suitable,” Professor McClelland said.

“It’ll inspire the next generations the way that the astronomy in the 1990s in Australia, in the 1980s, inspired researchers to build the SKA, the Square Kilometre Array.”

The Prime Minister’s Prize for Science was one of seven prizes awarded tonight. There are four other science and innovation prizes and two science teaching prizes.