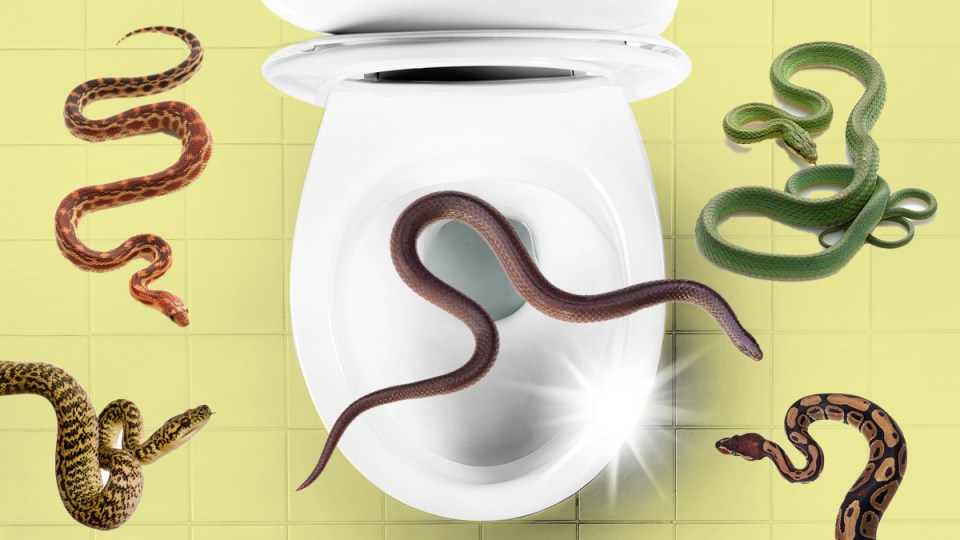 Australians may have some unwanted guests in the coming months, as we look to a summer spent at home. Photo: Getty / TND

It’s a nightmare we have all had before: You sit down on the toilet, phone in hand ready for some mindless scrolling, when all of a sudden you feel a pinch on your posterior.

Confronting a snake in the can is the type of story that will send shivers down anyone’s spine, but in one of their busiest seasons yet experts are warning it’s more common than you might think.

Mark Pelley, AKA the Snake Hunter, has been called to come and collect many unwanted guests from all over people’s homes in his eight years on the job.

“Every summer we are always looking at a lot of snakes,” Mr Pelley told The New Daily.

Stuart McKenzie, from Sunshine Coast Snake Catchers in Queensland, has urged families to take a closer look at their surroundings after getting a call to collect a red-bellied black snake found frolicking in a man’s pool.

“This is usually due to there being plenty of spots to bask in the sun.”

“It’s important that families be vigilant when swimming in their pool and understand that [snakes] often can’t get back out once they are in,” he said.

Mr Pelley, who has also found snakes in some truly bizarre places, seconds Mr McKenzie’s notion that Australians should be extra vigilant this summer.

Even something as simple as placing a shopping bag on the ground while unloading the car can lead to a hair-raising experience for unaware clients.

“[The client] opened the fridge later and there was an eastern brown snake crawling through their refrigerator.

“When the shopping was on the ground, the brown snake crawled into the shopping bag and they didn’t realise they inadvertently carried it into their house.

I opened the fridge and the snake was in the vegetable crisper.

Mr Pelley recalled another incident where a woman left her handbag unattended at an outdoor event and narrowly avoided catastrophic consequences.

“She put her handbag on the ground, and walked away from it, and thank god some other ladies saw this, but a brown snake crawled across the ground and had crawled into her handbag.

As snake handlers brace for a busy season, there’s one thing they understand makes this summer different to years past: a surge in snake sightings.

“The coronavirus keeps people at home, so you’re more likely to encounter snakes,” he said.

“Once upon a time, everyone was at work and snakes could crawl through your house and garden without you realising it, now people are home so you’re more likely to encounter them.”

Snake season usually begins in October and November, with the  peak usually around December and January.

During that time, Mr Pelley can be called to catch more than 15 snakes per day.

This year’s demand is already proving to be more than he can manage alone, so his business has had to hire two extra handlers.

The Snake Hunter also warned Australians to not attempt to catch snakes on their own.

“They’ll only bite you if you harass them or try to pick them up, if you leave them alone they’ll leave you alone,” he said.

“If you’re bitten by a snake, you need to immediately move away from it and dial triple zero.

“If you’re able to do so, you should apply the pressure and immobilisation technique, which is essentially just bandaging the affected area to slow down the spread of venom. “

Oh, and keeping an eye on the toilet bowl before you sit down won’t hurt either.

Look before you leak! From toilets to handbags, snakes are popping up all over