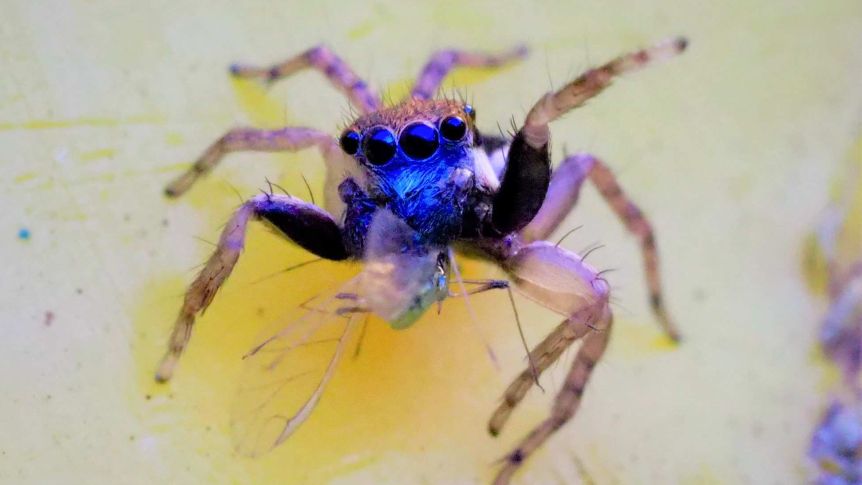 When Amanda De George came across a “pretty” little spider sitting on her recycling bin, she had no idea it was a new species of Jotus brushed jumping spider.

The little creature was brown with a vibrant blue face, had eight beady eyes and a distinctive pattern on the back of its head.

Unable to identify it, she quickly snapped a photo and uploaded it to her Facebook page, Backyard Zoology.

“Everyone likes a jumping spider. Well, maybe not everyone.”

Soon after, the post was brought to the attention of spider expert Joseph Schubert, who asked Ms De George to catch it so that he could formally identify it.

Mr Schubert is the entomology/arachnology registrations officer at Museums Victoria and specialises in the taxonomy of Australian jumping spiders.

“I’ve spent the last three months on my hands and knees looking for this spider,” Ms De George said.

“It has been bloody stressful.”

Finally, two weeks ago, she spotted the spider again on her deck.

Ms De George coaxed it, along with another she had found, into two separate containers – “because jumping spiders can eat each other”.

She then cushioned the special package with cotton wool and sent the delivery box by courier down to Mr Schubert in Melbourne.

The Jotus genus is a close relative of the colourful “dancing” peacock spider, which made headlines earlier this year when seven new species were discovered.

There are currently 14 named species of the Jotus genus.

Five of them were identified only last year by Mr Schubert and two other scientists.

Among the newly discovered spiders was the black and white Jotus karllagerfeldi, which was named after designer Karl Lagerfield.

Ms De George’s new spider is only four millimetres in length and has a black stripe bordered by white along its back, which is the identifying feature of Jotus spiders.

Another feature of the genus is their bushy front legs, which are used to perform a courtship dance to attract females.

They are harmless to humans, but are active hunters and inject venom into their prey.

The new spider will be formally described and named once Museums Victoria opens its labs again, giving Mr Schubert the chance to analyse it under a microscope.

For now the two spiders are in lockdown with him at home in Melbourne.