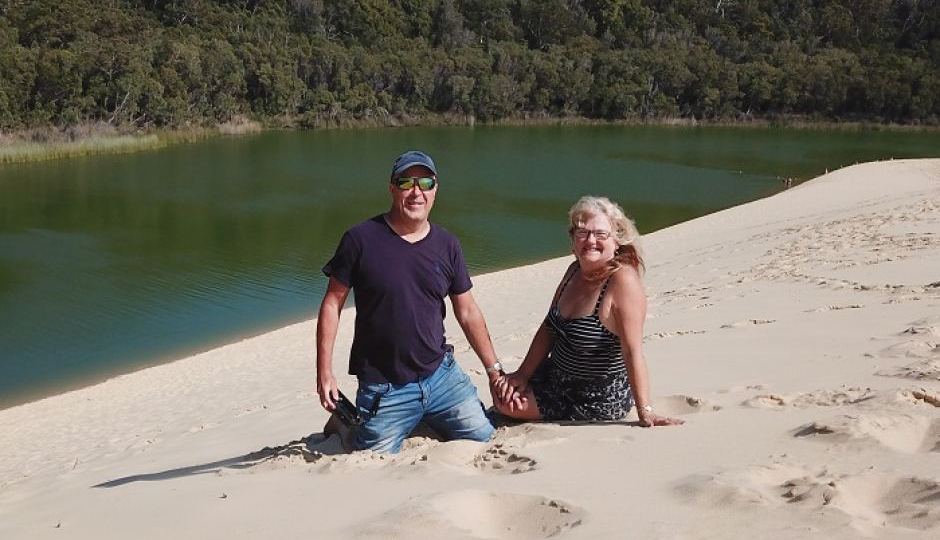 Visitors were banned from Queensland’s K’gari, or Fraser Island, during the busy Easter break, but one couple was already there and found themselves stuck on the world’s largest sand island during lockdown.

Kevin and Adele Hockey were the only residents in a group of holiday homes on the island’s eastern side at Poyungan Rocks and have found themselves living a kind of Robinson Crusoe existence as they navigate the normally packed beaches on their own.

The couple have been travelling Australia for the past four years after they packed up their Brisbane home, bought a motorhome and created a travel blog, Indefinite Leave, sharing their journey and advising others on how to do the trip.

Mr Hockey had already visited Fraser Island twice on fishing trips and when he and Adele were offered the chance to be caretakers of a group of holiday homes, they didn’t hesitate.

They travelled to the island on March 4, expecting to be looking after tourists during one of the busiest holiday periods.

At that time, coronavirus was only just starting to impact Australia.

This changed quickly as the number of cases in the country started to increase.

Visitors banned as restrictions kick in

On March 25, the Queensland government closed all camping areas and campsites.

The couple were visited by police on March 29 to explain the new conditions and social distancing rules.

They would only be allowed to go for walks on the beach and fishing for food, and could not travel to other parts of the island except to get essential supplies.

The resorts on the island quickly closed, with Kingfisher and Eurong resorts advising they would take no more guests until June.

All visitors to the island have been banned until May 31, and travel to the island has been restricted to island community residents, resort caretakers, island businesses and essential services.

The tour buses, four-wheel drive companies and adventure tours have stopped and the tourists who used to drive up and down the beach in front of the holiday homes have disappeared.

The island’s townships of Orchid Beach, the Cathedrals, Happy Valley, Eurong and Kingfisher Resort have became ghost towns with only skeleton staff.

“Eli Creek, Lake McKenzie, the Maheno Wreck and Champagne Pools are all normally bursting with people enjoying the island hotspots. Now there is no one,” Mr Hockey said.

As the only residents in the Fraser Beachfront Holidays accommodation houses at Poyungan Rocks, located halfway between Eurong and Happy Valley, seeing a car travelling down the beach is cause for excitement.

“It is so freaky, you are used to seeing all the backpacker tourist buses going up and down the island and if you would walk down on the beach, you would look up and down to make sure you don’t get run over.

“Now you get excited if you see a car and wave to them. It’s usually police.”

Even the island’s dingoes have disappeared.

Fraser Island has become a hotspot for dingo activity and it was only during the last Easter holidays a toddler had his skull fractured by two dingoes at a campsite on the island.

But Mr Hockey said they were seeing fewer dingoes than they normally would.

“I saw one yesterday for the first time in a week. Normally I’d see them all the time,” he said.

“They’ve gone into the centre of the island looking for food.

“Normally they’d be nearer here looking for scraps left behind [by humans].”

The lack of tourists on the island has been welcomed by Save Fraser Island Dingoes Association.

Spokeswoman Cheryl Bryant said Easter was traditionally the “busiest time on the island”.

‘Win-win’ for the wildlife

A Department of Environment and Science [DES] spokesperson advised between 10,000 and 14,000 people normally visited the island over the Easter break.

“This will be a reprieve for all of the wildlife and for the environment,” Ms Bryant said.

“I know it will be difficult for the economy, but for the wildlife it is a win-win.”

As for the Hockeys, they were expected to be on the island until the end of July.

But the caretakers who were supposed to take over from them were in South Africa and may not get back in time.

The Hockeys were prepared in advance for long stretches of time alone, with limited access to shops and resources.

“We brought a lot of food over. We have a couple of months of supplies,” Mr Hockey said.

“And we’ve been catching our own fish to stretch it out a bit.

“There are shops here which had begun stocking up for Easter – they’ve been hit really hard so we are able to stock up there if we have to.

“But we had worked out a meal planner for six weeks [before arriving there] and we shopped off that.”

No rest for the caretakers

Even though the island is deserted, there is still work to be done.

“There is a lot of maintenance,” Mr Hockey said.

“We operate off generators and solar and we have to maintain the lawns and the yard.

“We are having a big problem with lawn grubs and we are dealing with that.”

Even though there were not many people on the island, they still were not allowed to travel around or gather in groups, and police and rangers were on the island ensuring everyone followed the rules.

“We’ve also been asked where Wilson is a few times [from the Tom Hanks film Castaway].”

COVID-19 saw Easter visitors banned from Fraser Island, but this couple is stuck there in lockdown