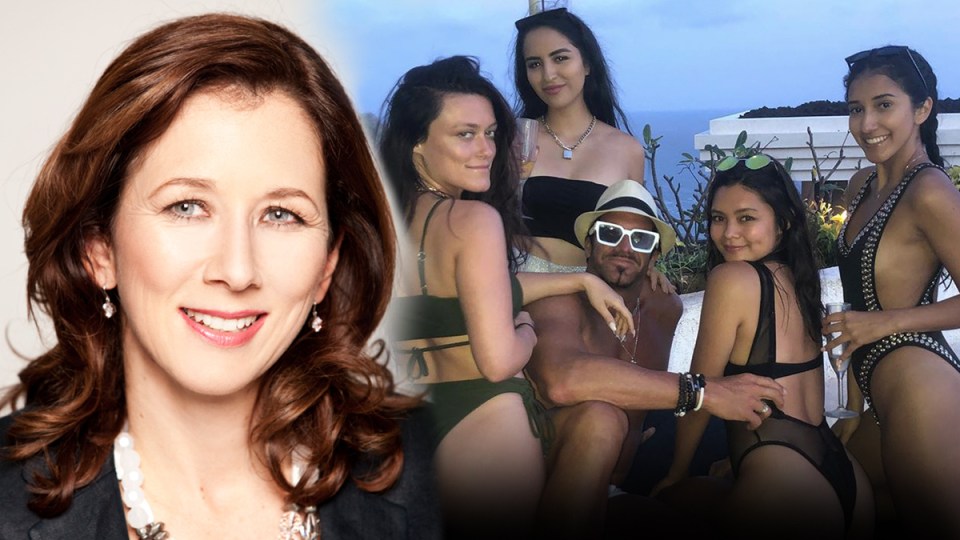 I discovered this courtesy of a story in Queensland’s largest newspaper on Sunday, which seemed a tad provocative, given that Sunday was also International Women’s Day.

Potential job applicants were informed they must be attractive and prepared to live full time in Beynon’s Candy Shop mansion on the Gold Coast, where they would also be expected to help out around the house.

Much of their days would be dedicated to maintaining their fitness and appearance – “Travers spent 10 years in the fashion world and has the experience and a unique way of styling to help you reach your full potential” – while at night they would be expected to share one of three adjoining king-size beds with Beynon, his wife and other girlfriends.

Being in a relationship with anyone other than Beynon while employed by him would be a “deal breaker”.

But successful candidates would have the cost of food, travel, clothing and beauty treatments covered; in addition, Beynon would pay them $100 to $500 a week.

As I said, it seemed a somewhat incendiary proposal, particularly on a day that celebrates the advancement and achievements of women towards gender equality.

As a journalist who has spent many years writing about women’s issues, including Queensland’s chequered history of sex industry law reform, I thought I knew what the public reaction would be.

I may have even bought popcorn and sat back to enjoy the show, expecting high-profile commentators to line up to decry this blatant exploitation of working women.

But instead … almost nothing.

Just a few anaemic crickets, in the form of Beynon’s local MP Meaghan Scanlon (also the state Labor government’s assistant minister for tourism), who commented “it’s outrageous to say that in the 21st century, women should be purchased and treated as property”, and a spokesman for the state Opposition leader, who declared the ad “distasteful”.

But clearly, Beynon’s job ad was not distasteful or outrageous enough to trigger too much action from feminists or other high-profile women in media or politics.

Of course, you could argue that the media has been focused on more important things. Things like coronavirus and the likelihood of a recession.

Or, at least, the spectacle of people beating each other up for toilet paper.

But I’m not convinced.

I suspect there’s another explanation. My 14-year-old son often tells me that “nobody likes a fun sponge” – and nowhere is this more obvious than in the modern media and pop culture generally.

We know sex sells – just look at reality TV – and nobody wants to be the wowser decrying it.

It’s much easier for modern women, particularly those in the media spotlight, to celebrate International Women’s Day if they can simply argue that any sexual exchange is fine, provided it’s a free choice between consenting adults.

But to assume that every “choice” is equal strikes me as a particular failure of intellect and imagination. Or deliberately disingenuous.

As the heir to a lucrative tobacco empire, for example, Travers Beynon enjoys an array of lifestyle choices that are not available to a middle-aged bloke in Adelaide who had, until recently, spent his entire working life in the Holden factory.

Or a young tradie in western Sydney seeking to buy his family’s first home before his pregnant wife stops working.

Similarly, the young women who might be attracted to the prospect of earning $500 a week as a sexual companion and playmate to a married man will have an array of reasons for doing so that may be alien to others.

Feminism has grappled with this dilemma – whether it is even possible to make genuinely free choices in a system of structural inequality – for generations.

I’m certainly not naïve enough to think we can change all of the circumstances which combine to ensure some women will jump at the chance to sleep in one-third of a king-size bed while having a man who is twice their age telling them how they should look, when they should have sex, and how they should spend the rest of their time.

But the very least we could do is ensure those women understand that, as paid employees, they are entitled to some basic working conditions.

And as their boss – and yes, Beynon most certainly is their boss even if he’d prefer to be seen as a benign playboy – the Candyman has some obligations.

When my son calls me a “fun sponge”, I respond that my primary job as his mother is to ensure he and his brother are healthy and safe.

And if I was the mum of any of the Candyman’s job applicants, many of them will only be a few years older than my sons, I would first assure them they are certainly entitled to have sex with whomever they wish.

But if this is going to be a full-time gig, will he be making contributions to their superannuation?

And since Beynon is so happy to help them physically “improve” themselves, would he be equally happy to fund some part-time study?

And what happens if you say no to something because it is painful or if you just don’t feel like it?

What happens if you slip over during one of those infamous pool parties, or fall down the stairs?

What happens if that injury permanently affects your ability to perform your job, whether that means looking good in a bikini or pole-dancing or being available for marathon sex sessions?

I’m not being snide here; if these are the terms of the job, surely these girls should be entitled to health care and workers compensation if they’re injured?

These may seem like boring questions, but they matter.

Because young people, vulnerable people, people who have limited economic or education opportunities, all of those people make choices every day that perhaps they wouldn’t if their circumstances were better.

And one day, even if they can’t imagine it now, these young women will be older, maybe fatter and more tired or maybe just bored – or maybe keen to play with a baby of their own, rather than playing the sugar baby for someone else.

And at that point, the feminism-lite of “it’s all good between consenting adults” won’t be much help.

Christine Jackman: Whatever works in odd job, so long as boss treats his employees well