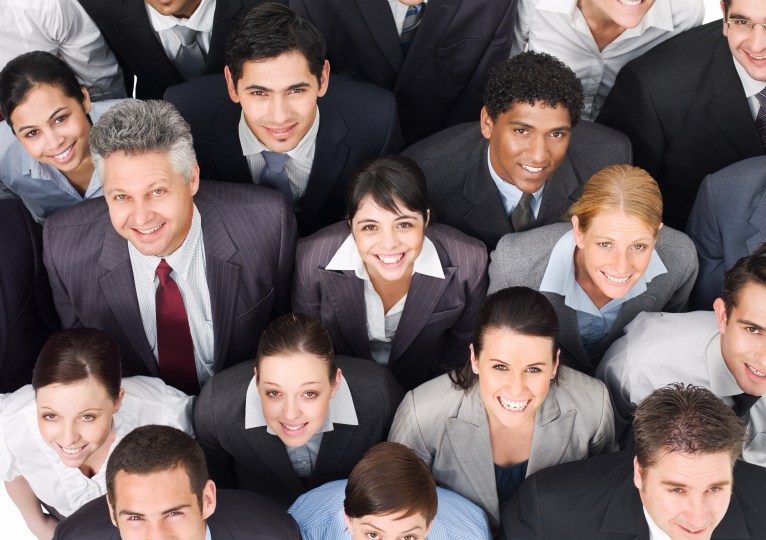 Their smiles could mean very different things. Or they could all be saying, "Hurry up and take the damn picture." Photo: CBS

Because I’m not confident that everybody smiles with you when you’re sitting on the bus with a whimsical grin on your dial. The question that more likely arises is this:

“What’s going on with that guy?”

By the way, happy belated World Smile Day – the heart-child of Harvey Ball.

Smiley face not as happy as he’d hoped for

He was the commercial artist from Worcester, Massachusetts, who created the peculiarly jaundiced smiley face in 1963, since replicated on millions of badges and T-shirts – and sometimes attributed to Forrest Gump.

Harvey’s desire to create a symbol of good cheer for his fellow humans turned sour when his doodle became a commercialised monster – and the true meaning of his smile was lost.

But that’s the way of the smile, Harvey.

It doesn’t just mean one thing

As Hermann Melville noted, way before everybody had perfect teeth: “ A smile is the chosen vehicle of all ambiguities.”

More than a registered trademark, it was Harvey’s nice idea that “we, all of us, should devote one day each year to smiles and kind acts throughout the world.”

Anyway. That was yesterday. Did you notice? What does a smile mean to you?

Among the myriad of World Smile Day® events was a poll of 2000 people that found the average Australian smiles 20 times a day. (How do they know? Are people keeping smile ledgers?)

The poll – conducted by Invisalign Australia, an orthodontic device company – also found that eight in 10 people wish they smiled more. And 87 per cent admitted they felt happier when they smiled.

Which is rather lovely

AbFab’s Joanna Lumley – whose wonderful teeth cannot be discouraged – has said she smiles all the time because it makes her feel better.

The New Daily’s Entertainment Editor Kate Halfpenny told me she follows Ms Lumley’s advice and feels likewise chipper most of the time.

But she has noticed: “People think I’m a weirdo.”

I think it’s more that people don’t trust her… her smile, I mean. And why should they?

One old – and somewhat sadistic – school of thought suggests we have 19 different kinds of smile, and only six of them are associated with happiness, pleasure or lovingness.

This was the conclusion of Carney Landis, a psychology student at the University of Minnesota, who in 1924 published a legendary study of facial expressions – based on experiments where he photographed participants continuously over a three-hour period.

During that time, the volunteers engaged in pleasant, boring, serious and outrageous activities – these ranged from listening to jazz music, reading the Bible, looking at pornography, decapitating live rats, suffering the surprise of fireworks exploding under their seats and almost being electrocuted while feeling around in around in a bucket of frogs.

The most common reaction to all of these events was to smile – which suggests to me that a reflexive self-consciousness overrode rage or disgust in this “academic” setting. The smile kept the subjects engaged while protectively camouflaging their real feelings.

In the Journal of Comparative Psychology, Landis wrote: “So far as this experiment goes I have found no expression other than a smile, which was present in enough photographs to be considered as typical of any situation.”

He found that people smile when they’re in pain, embarrassed, uncomfortable, horrified, miserable, angry, contemptuous, incredulous and perhaps most importantly, when they’re lying.

A 2017 study from the UK concluded there are three smiles, as described in the title of their paper: Functional Smiles: Tools for Love, Sympathy, and War.

Notably, they suggest a smile “is the most frequent facial expression, but not all smiles are equal.”

This suggests that smiling – whatever true emotion lies behind it – is our go-to expression when engaging with another person.

We even smile when engaging with computers

This idea is supported by a 2018 study from Brighton and Sussex Medical School in which volunteers played a geography quiz game consisting of nine difficult questions, meaning they often got the answer wrong.

The participants interacted with a computer alone in a room while their faces were video recorded.

After the quiz, the participants were asked to rate their subjective experience using a range of 12 emotions including “bored”, “interested” and “frustrated”.

Meanwhile, their spontaneous facial expressions were then computer analysed frame by frame in order to judge how much they were smiling.

Lead author Dr Harry Witchel, Discipline Leader in Physiology at the school said, in a statement: “According to some researchers, a genuine smile reflects the inner state of cheerfulness or amusement.

“However, Behavioural Ecology Theory suggests that all smiles are tools used in social interactions; that theory claims that cheerfulness is neither necessary nor sufficient for smiling.”

The human-computer interaction experiments, he said, support that theory: smiling is not driven by happiness but rather is associated with subjective engagement, “which acts like a social fuel for smiling, even when socialising with a computer on your own.”

Statistically, he said, the emotion that was most associated with smiling was “engagement” rather than “happiness” or “frustration”.

So there is a fundamental honesty in a stranger’s smile, because it’s an almost automatic response. But it might not mean what the stranger hopes it to mean.

What about faking it?

For Ms Lumley and Ms Halfpenny, it’s their way of chasing bliss. But faking a smile because you’ve been ordered to do so – say, when serving customers coffee or measuring their feet – may not be so healthy.

A Penn State study published in April found that employees who force themselves to smile and be happy in front of customers – or who try to hide feelings of annoyance – may be at risk for heavier drinking after work.

At least for a while, as the glow comes on, they’ll look a little happier.

Feeling scared, bitter, cruel? Whatever, you’ll likely have a smile on your dial