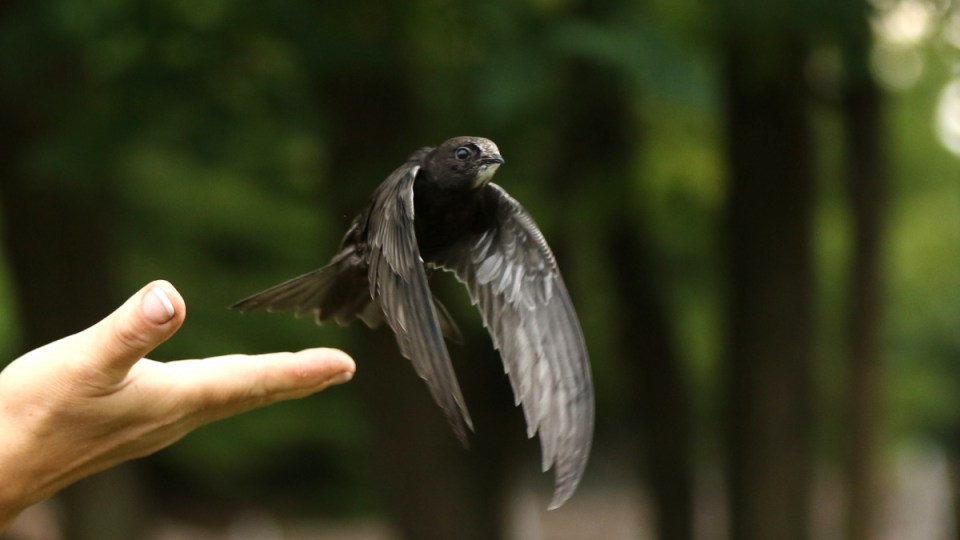 Not much more than a handful, this Common Swift travels from Europe, over the Alps, to sub-Saharan Africa and India and back again. Sometimes with never landing. Photo:Getty

If you were to see underneath a swift as it zipped through the sky, you might notice it virtually has no legs and feet so tiny you’d be right to think them useless.

This is because they almost don’t need them – the bird has adapted to a near-permanent life in the air.

For 60 years, birders have believed that common swifts spent long stretches uninterrupted on the wing. In the past decade, science has been steadily catching up with folklore.

Seeing Africa from the air, for months and months

In 2013, Swiss researchers attached lightweight data loggers to three alpine swifts – and found they flew nonstop for 200 days, as they migrated from Switzerland to Africa and home again.

Whatever rest stops they may have made, were rare and a matter of hours.

Otherwise, they fed, mated and slept in short snatches without coming down to perch.

That same year, researchers from Lund University in Sweden conducted a similar study of 19 common swifts – and found that some individuals lived in the air for 10 months without landing once.

The scientists suggested the birds that rested – between one and four times only – hadn’t finished replacing their wing and tail feathers during moulting and therefore were under physical stress.

The Lund scientists recently published a new study, of pallid swifts, a species that breeds twice a year (common swifts breed once a year) which curtails its unbroken time aloft to about three months.

The micro-data loggers in these experiments measure movement when the wings flap, recording activity every five minutes – and the bird’s location once a month during the winter months in West Africa, where they head after breeding season in Italy.

They don’t even land when building their nests

“They land when they breed under a roof tile or in a hole, otherwise they live in the air.

They eat insects while they fly, and when they have reached a high altitude and start gliding, they actually sleep for short periods,” Anders Hedenström said, professor at Lund’s Department of Biology, in a prepared statement.

“However, it doesn’t actually matter if a species spends three or 10 months in the air. Both are adapted to live in that element. They are designed to fly with maximised energy efficiency, regardless of whether they are flapping or gliding.”

On the face of it, it seems counterproductive for a bird to be on the wing for most of the year without a break. Birds have a very fast metabolism that allows them the energy to sustain flight – but they require frequent feeding just to stay warm, let alone in the air.

Professor Hedenström observed: “It’s always said, of course, that flying is birds’ most energy-intensive activity. I have calculated that a nightingale, which doesn’t live in the air in the same way at all, expends as much energy as a pallid swift, which is in the air all the time.”

Albatross have adapted to circumnavigate the planet in about 50 days without stopping – their wings and flying style are shaped in such a way to consume very little energy. They use the wind off the waves to power them.

They’re also assumed to have the ability to sleep on the wing for short periods – as has been proved in experiments with frigate birds.

In fact, swifts have rigid wings that make them exceptionally aerodynamic and probably allows them to stay locked into a favourable pitch while sleeping.

Still, the question remains: Why bother?

Albatross are forced to stay in the air because they have a surging ocean beneath them most of their lives. Swifts, though, once they cross from Europe to Africa, have perching spots, including roofs and chimneys, if they care to use them.

When seeing swifts swooping through the sky, they’re often confused with swallows. In fact, their closest relative is the freakish hummingbird.

Ten months on the wing: Swifts have adapted to life not on earth