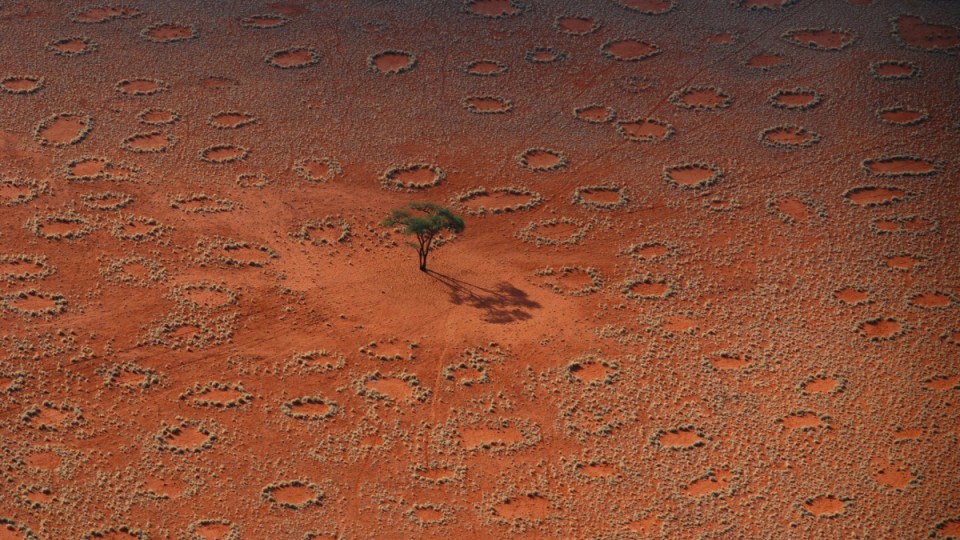 A hundred years on and the mystery of the fairy circles runs hotter than ever. This week another theory was published, once more claiming to have cracked the code of how these rings of bare red earth fringed with grasses, much like eyelashes, are made.

They range in size from 3.5 metres to 35 metres across.

Dotting the hard plains of Namibia in their millions, arranged sometimes in a near-perfect honeycomb – and other times like fallen raindrops – the Himba​ people believed they were the footprints of their gods.

A breakaway theory held they were the work of an underworld dragon: every time the dragon draws a breath and exhales, the fire rises to scorch the surface of the earth and another circle is born.

Maybe not fairies at all

In the 1920s, scientists started pondering and poking around – spawning theories that the circles were caused by grazing ants, radioactivity, subterranean poisonous gases and plants fighting among themselves for water resources.

In March 2013, Professor Norbert Juergens, an ecologist from the University of Hamburg in Germany, published a paper based on 40 field trips in the Namib Desert. At every fairy circle he surveyed, Dr Juergens found a species of sand termite – Psammotermes allocerus.

But they also used the fringed circles as forts – which explained why they were more or less arranged equidistant from one another.

It was an exciting idea and for six months, Professor Juergens was a bona fide fairy circle superstar. In interviews, he boasted that the termites were smarter than beavers.

In August, 2013, South African and US scientists rained on Professor Juergens’ parade by publishing a paper that found fairy circles occur only in places with low rainfall. They presented aerial photographs that suggested the circles grow after dry years, and shrink after wet ones – and that plants were making the circles.

Then, in 2014, researchers found fairy circles in Western Australia and Northern Territory – although local indigenous people say they were long used as places to sit and grind grasses, because of their flat hard surface.

This was a big deal – leading to detailed coverage in heavy-hitting publications around the world.

Dr Stephan Getzin is an ecological modeller from the University of Göttingen in Germany and formerly a fan of the termite theory. He’d been very quietly researching the Australian circles – keeping them secret until publishing a paper that argued the hexagonal pattern, the same as that found in Namibia, was too exact to be the work of termites.

From analysis of temperature and soil samples, Dr Getzin supported the theory that deeper-rooted plants were making moats around themselves – known as “self-organisation” theory.

Neighbouring plants shared in survival while more distant plants did not. The circles were what was left behind: hard, dry and unable to take any seed, they serve as rain-catchers.

The debate has gone back and forth. Australian scientists – in tandem with indigenous rangers – in 2016 came out in support of termites. Other researchers have found more evidence for plants creating moats.

And now, this week, Dr Getzin is back with a new theory and – in collaboration with researchers from Israel and Australia – he hopes to kill off the termite idea for good.

Dr Getzin and his team dug a total of 154 holes in 48 fairy circles east of Newman, Western Australia, over a length of 12 kilometres “in order to assess the possible influence of termites objectively and systematically”.

With the help of drones, they mapped areas of 500 metres by 500 meters to compare typical vegetation gaps – such as those caused by harvester termites in large parts of Australia – with typical fairy circle gaps.

In addition, they investigated the soil conditions in the area of the fairy circles and in adjacent reference areas, where no grass grows over large areas.

Getzin thinks he’s got it

“The vegetation gaps caused by harvester termites are only about half the size of the fairy circles and much less ordered,” said Dr Getzin, in a prepared statement from the University of Göttingen.

“And in most cases, we didn’t even find any hard subterranean termitaria (termite accommodation) elsewhere in Australia prevent the growth of grasses.”

So what’s the conclusion? Dr Getzin reckons the high soil compaction and clay content in the investigated fairy circles and vegetation-free reference areas are indications that the fairy circles are formed by processes such as mechanical weathering of the soil by heavy rain in cyclones, extreme heat and evaporation.

Boring! But at least it keeps the conversation going.