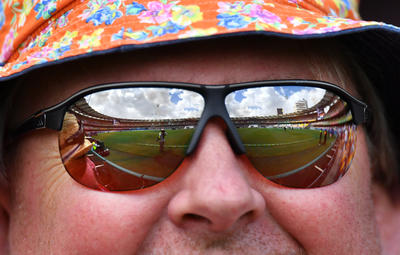 Sunglasses are essential to guard against eye sunburn in summer. Photo: AAP

Most of us know we should apply sunscreen as the summer sun intensifies, but what about protecting your eyes from sunburn?

Optometrists are warning Australians to not only slip, slop and slap, but to also slide on some sunglasses to protect their eyes and prevent serious health issues down the track.

Resident optometrist from Optometry Australia, Luke Arundel, said without protection, eyes were at risk of photokeratitis, a painful eye condition that occurs when eyes are exposed to too much ultraviolet radiation.

“Photokeratitis can occur in one or both eyes simultaneously. Similar to sunburn which occurs on your skin, it is not usually noticed until well after the damage has occurred,” he said.

When her eyes started getting red and painful, Year 12 student Bonita De Brincat realised they had been sunburned.

Living in north Queensland, the Innisfail teen understands the importance of sunscreen but failed to wear sunglasses during a recent island adventure.

“I was quite surprised [eyes could get sunburned] but I should have worn sunglasses.”

“I had an ice pack over my head, it was painful and I just was laying down the whole time,” she said. “There’s not much you can do to try and relieve the pain.”

Since the sunburn, the 16-year-old has been wearing her sunglasses more frequently and encouraged others to learn from her painful experience.

“Always take precautions, the sun can be sneaky,” she said.

Photokeratitis is common, particularly when a person has been unprotected from reflected glare like Bonita.

Mr Arundel said while many parents and schools did not let children go outside without sunscreen, not enough emphasis was put on protecting eyes from sun damage.

“UV radiation from the sun can cause significant damage to a child’s eyes and lead to serious eye conditions later in life, so we are urging those who care for children, to work with us to stamp out some of the problems caused by sun exposure,” he said.

Too much UV exposure can lead to serious conditions such as cataract, macular degeneration and even eye cancers, optometrists warn.

“When packing for your summer holiday, sunglasses are an essential item for most Australian adults,” he said.

“It is time that parents ensure children also have their own pair.”

Why sunglasses are a must in the summertime