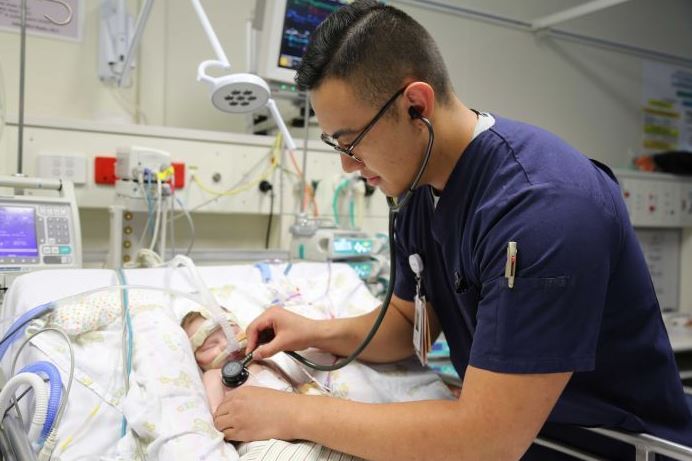 Tender hands for tiny tots, that's the job that Joshua Banner proud to be a nurse. Photo Westmead Children's Hospital

Nursing is not for the faint-hearted, and I’m not just talking about the blood.

Nurses and midwives welcome us into the world, help us stay for as long as possible and often comfort us in the end — but it’s no secret they are often overworked and under-supported.

Those professional stresses often feed into their personal lives, taking a toll on finances, relationships and mental health.

Female nurses and midwives have a suicide risk almost three times the rate for women in other jobs. For males, it’s one-and-a-half of that for men in other professions (alarming when you consider the already-high rate of suicide in men).

It can be a gloomy picture for those we can’t live without, but still, there are more than 360,000 nurses in Australia. You probably know a few.

On International Nurses Day, May 12, we ask these Aussie legends why be a nurse?

Farron Sullivan used to complain about the sleep deprivation associated with nursing, but then she had triplets.

Nursing was always a path she wanted to take, following in the footsteps of her mum and step-father.

“My step-dad has been an emergency nurse and I was really inspired by them,” she says, adding at six years old she knew it was the career for her.

Since becoming a mum, Farron has reduced her working hours to two days a week, which she says can be a break from home life.

But it’s the emotional side of working in the ED the registered nurse struggles with.

“It makes me a better nurse but it also has its impact on me.”

Farron says support from work colleagues and in-house counselling is key, because she wouldn’t choose any other career.

“Once you start nursing you can’t stop, you don’t know what else you want to do.”

A rollercoaster is how 22-year-old Joshua Banner would explain his role in the intensive care unit (ICU) at Westmead Children’s Hospital in Sydney.

“You don’t know what is around the corner, but you just hold on and keep going,” the registered nurse says. “It’s the land of the unknown.”

Joshua decided to become a nurse while working with vulnerable children overseas.

“I was exposed to different types of situations where children and adults were involved and they didn’t have the best facilities, so I thought nursing would allow me to eventually travel overseas and help those less fortunate.”

Joshua, who describes himself as a foodie, gym-lover and adventurer, says the toll nursing takes can sometimes impact on his personal life, but the reward of supporting families gives him a sense of purpose.

“In the ICU we see the parents and the children at the absolute worst time of their life. It’s family-centred nursing, rather than patient-centred nursing.”

Joshua says he holds memories for the children who “don’t end up the way you hope”, but is comforted by those that do.

“When they come back in to visit and you see how far they’ve come from what they were, they can breathe on their own, it’s a nice feeling.”

Registered nurse Sharee Rayner, who provides in-home aged care and disability support for Just Better Care in Melbourne, says it is a “privilege” to be part of a family’s intimate moments.

“We get to be a part of life coming into the world, and people leaving the world,” she says.

“For that short amount of time, the family treats you like one of their own.”
Sharee has been present for the passing of several patients and describes those moments as an honour.

“We had one lady who we rolled over to face the window so she could look out while she went,” she says. “That was beautiful to watch, she went very peacefully. It’s not always peaceful so it’s nice to see that.”

But the role of nurse doesn’t come without sacrifice for the Melbourne mother, who says missing out on time with her children has been hard.”The guilt, it gets to you — I haven’t walked the dog, I haven’t cooked my child a meal in three days.

“You’re there looking after patients, making sure they are safe, nurtured, fed and given emotional support then you go home and walk in the door and the kids ask what is for dinner.

“Sometimes it just feels like everyone wants a piece of you.”
-ABC

The labour of love that makes our nurses so very special