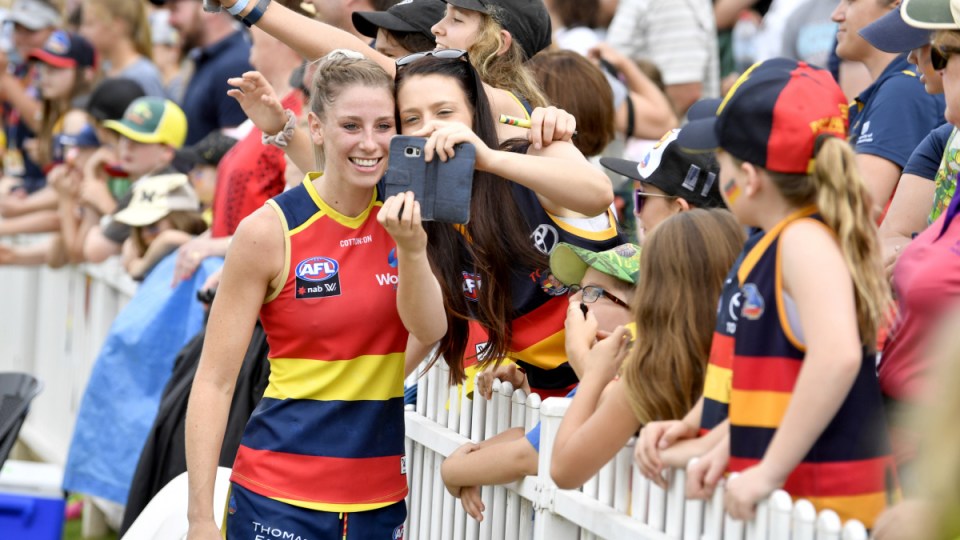 Premiership Crow Deni Varnhagen will not play in the upcoming AFLW season after refusing the COVID-19 vaccination. Photo: AAP

Adelaide AFLW premiership defender Deni Varnhagen will not play in the competition this season after refusing to receive the COVID-19 vaccination.

Varnhagen, who works as registered nurse in intensive care units, has been in discussions with the Crows over her jab stance and reiterated her position this week.

It means the 29-year-old will not meet the requirements of the AFL’s vaccination policy.

Under the policy, all AFLW players and football staff are required to receive their first vaccination by November 19 and be fully vaccinated by December 17.

Varnhagen has now been placed on the inactive list, with the Crows able to replace her before the sixth season of the competition starts on January 6.

“The AFL’s initial vaccination deadline is still a fortnight away, however, Deni has made it well known she is against vaccination in this instance,” Adelaide chief executive Tim Silvers said.

“We have a team-first approach and the timing of this decision has been made in the best interests of the team and its preparation for the upcoming season.

“Our club supports the league’s policy and we strongly encourage people to be vaccinated for the benefit of community health and safety.

“We would like to acknowledge and thank Deni for the significant contribution she has made to our women’s program over the past five seasons.”

Varnhagen joined other nurses in Adelaide on Tuesday to protest about mandatory vaccination for healthcare workers, which came into effect in South Australia this week.

She told reporters at the rally she did not want to be “at threat” of losing her nursing job because of what she labelled as a “medical experiment”.

Varnhagen was a member of the Crows’ inaugural AFLW squad and played 31 games for the club, including the 2017 and 2019 premierships.

Adelaide coach Matthew Clarke this week confirmed every other AFLW player at the club will soon have received both vaccine doses.

AFLW Crow ruled out of season after refusing COVID-19 vaccination