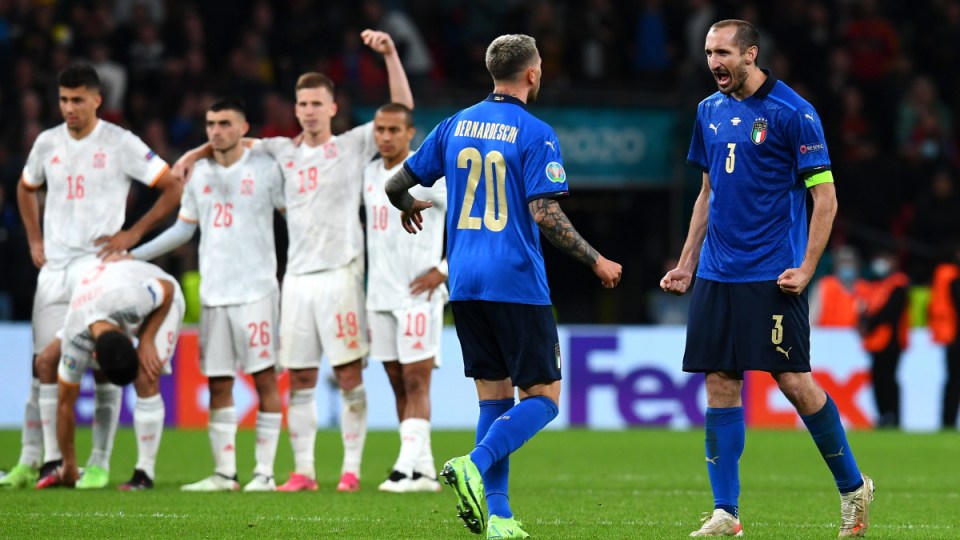 Giorgio Chiellini of Italy celebrates with Federico Bernardeschi after he scores his side's fourth penalty in the penalty shoot-out against Spain. Photo: Getty

Italy have overcome Spain in penalty shootout to reach the European Championship final after a 1-1 draw.

Jorginho rolled the decisive penalty home to give the Italians a 4-2 win in the shootout at Wembley Stadium on Tuesday night (local time).

Italy will face the winner of England and Denmark in Sunday’s final.

After a cagey first half, Italy struck on the hour when a fast-paced break begun by Donnarumma ended with the ball falling for Federico Chiesa, who cut in from the left and curled in a superb finish.

Spain levelled 10 minutes from time when Morata, dropped from the starting team after a run of poor finishing displays, played a clever one-two with Dani Olmo to open up the Italian defence and calmly slot home to take his team into extra time for the third successive game.

Reaching the final extends Italy’s unbeaten run under coach Roberto Mancini to 33 games – if they make it 34 they will be European champions for the second time after their sole triumph in 1968.

Such a record would make them deserved winners but Spain will rue the several opportunities they had to reach their own first final since their last Euro triumph in 2012.

Though visiting fans were not allowed to attend due to coronavirus rules, a substantial number of UK-based supporters cheered their teams on in a crowd which could have reached 60,000 had all tickets been sold.

And it was the larger Italian section which cheered loudest in the when Lorenzo Insigne and Marco Verratti raced clear on a break.

Aymeric Laporte slid in to deny Ciro Immobile at the last moment but the danger was not averted – Chiesa opened his body to guide a shot from 14 metres into the far corner.

Italy managed only one shot in the first half when Emerson, who replaced injured left back Leonardo Spinazzola, grazed the bar in injury-time.

Mikel Oyarzabal’s fine dribble set up his captain Sergio Busquets to shoot just over as the second half started with Spain on the front foot.

But Chiesa immediately had a low shot saved and moments later he made no mistake when faced with keeper Unai Simon again.

A miserable night for Oyarzabal was completed when he missed a header from Koke’s delicate cross but Morata, with his third goal of the tournament to become Spain’s record Euro scorer with six, forced extra-time.

It came down to penalties and after Manuel Locatelli and the otherwise superb Olmo exchanged misses, the sides found the net until Morata stepped up for Spain’s fourth kick.

His weak shot was easily saved leaving Jorginho, who won the Champions League with Chelsea, to slot in the winning kick and spark wild celebrations.

Italy through to Euro 2020 final after penalty shootout win