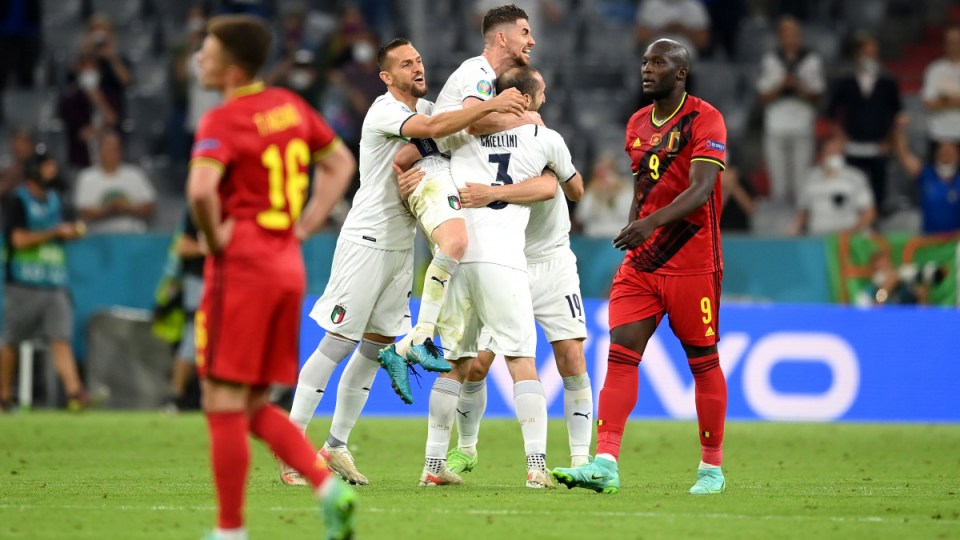 Goals from Nicolo Barella and Lorenzo Insigne have fired Italy to a 2-1 win over Belgium and a spot in the European Championship semi-finals.

Romelu Lukaku pulled one back from the penalty spot right before half-time but the Belgians missed further chances to equalise in the second half.

Barella put Italy in the lead in the 31st minute after eluding two Belgium defenders and sending the ball in off the far post.

Insigne got the second in the 44th when he put a curling shot inside the far top corner.

Italy will next play Spain in the semi-finals on Tuesday at Wembley Stadium in London.

The Spanish defeated Switzerland on penalties in St Petersburg earlier on Friday.

Lukaku then made it 2-1 by sending his shot down the middle.

It was only the second goal Italy has conceded at the tournament.

Kevin De Bruyne started the match for Belgium after recovering from a left ankle injury, but Eden Hazard remained out with his leg injury.

In that day’s other quarter-final, Switzerland took Italy to a penalty shoot-out before finally succumbing to the Azzurri.

Swiss manager Vladimir Petkovic said his team can leave the European Championship with their heads high after being eliminated by Spain on penalty kicks in the quarter-finals at St Petersburg.

An equaliser by captain Xherdan Shaqiri in the second half cancelled an early own goal and sent the teams to extra-time despite the Swiss being reduced to 10 men.

But two of the Swiss penalty kicks were stopped and one missed the target.

It was a cruel end for Switzerland who had beaten France on penalties in the round of 16.

“All these players were the heroes of the night,” Petkovic said.

“They would have deserved to go to the semi-finals.

“I cannot complain and I take my hat off to the team.”

Petkovic said he could not blame Ruben Vargas for hitting his penalty over the bar in the shootout, saying instead that his player had demonstrated mental strength by even taking a spot-kick after such a long and gruelling match.

Penalty kicks by Manuel Akanji and Fabian Schar were both stopped by Spanish goalkeeper Unai Simon.

“We had to spend all our power and energy, and our energy ran out a little,” said Petkovic.

“Penalty kicks are a lottery and we lost it.”

Petkovic said he had not properly seen the tackle in the 77th minute that led to the red card against Remo Freuler – who had an assist for the Switzerland equaliser – but thought it had looked more like a minor foul.

Freuler slid to win the ball back but caught Gerard Moreno in the process.

“I question it a little bit, to be honest,” Petkovic said.

“He (Freuler) maybe touched him a little.”

Spain will face the winner of the quarter-final between Belgium and Italy in London on July 6.