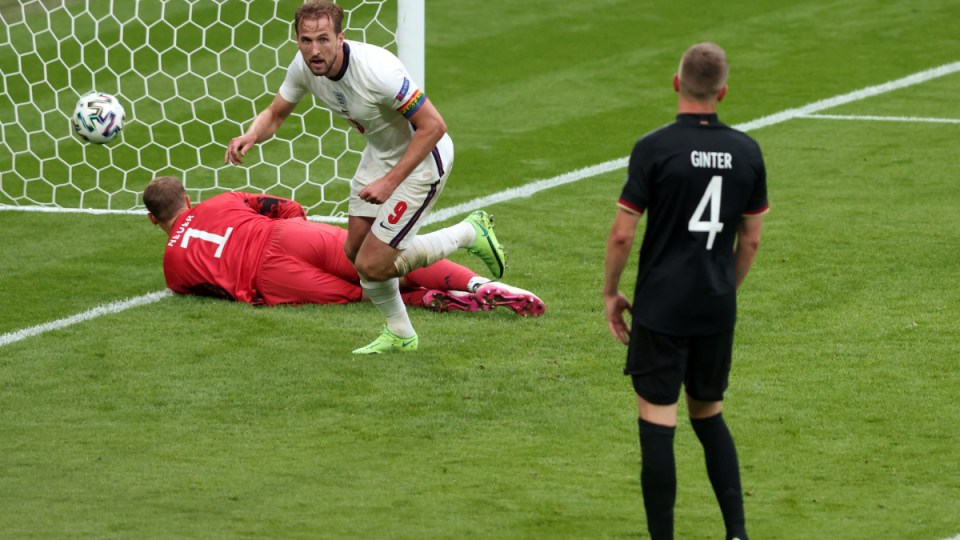 England is unburdened by the weight of agonising history: Germany has finally been beaten in a tournament again.

No need to endure more penalty heartache or disallowed goals this time.

Just like in the 1966 World Cup final, England triumphed over a German team at Wembley Stadium on Tuesday, winning 2-0 to reach the European Championship quarter-finals.

And just like in England’s two group wins, Raheem Sterling was on the scoresheet, breaking the tense deadlock in the 75th minute in a move he started and completed.

The round of 16 finally saw England net more than once at Euro 2020, and for Harry Kane to shed the pressure on his shoulders by finally scoring. The striker headed in Jack Grealish’s cross in the 86th minute.

“With all the expectation and pressure,” Kane said. “We delivered.”

It was England’s second-ever win in the knockout stage of the European Championship.

The last came on penalties against Spain at Euro ’96 before the hosts were denied a place in the final by Germany in a shootout at Wembley.

It was on penalties that Germany also beat England in the 1990 World Cup semi-finals. Then there was the English goal wrongfully disallowed as Germany knocked the English out of the 2010 World Cup.

Now England will play Ukraine in the Euro 2020 quarter-finals on Saturday in Rome, eying a return to Wembley for the semi-finals and the final on July 11.

While Sterling’s goals are spearheading England’s progress at this largely-home tournament, the saves of Jordan Pickford are proving vital, too, including using one hand to push over Kai Havertz’s shot at the start of the second half.

“We had to be brave on and off the ball,” England defender Harry Maguire said. “It was really important.”

The clamour to introduce Grealish was growing in the second half. It’s what got fans chanting inside Wembley, with a crowd of about 40,000 the biggest since the pandemic began in March 2020.

The winger finally entered with about 20 minutes to go and played a role in the opening goal.

Sterling first took on the defenders, going past Antonio Rudiger before passing to Kane, whose layoff to Grealish then went to Luke Shaw. And it was the left back’s cross that Sterling connected with, shooting past Neuer with his right boot.

For all the experience in Germany’s side, it was World Cup winner Thomas Muller who squandered a chance to equalise in the 81st minute. With only Pickford to beat, Muller put the ball wide.

England has yet to concede in its four games at Euro 2020.

“It’s a moment none of us will ever forget,” said Kane, who scored his 35th international goal. “The perfect afternoon.”

In the day’s other clash, Artem Dovbyk has scored a dramatic winner in stoppage time at the end of extra time as Ukraine squeezed past 10-man Sweden 2-1 to book a European Championship quarter-final clash with England.

The final whistle was met with wild scenes of celebration as Ukraine reached the last eight of a major tournament for only the second time, after they made the quarters at the 2006 World Cup.

Ukraine and Sweden were level at 1-1 after 90 minutes with goals from Oleksandr Zinchenko and in-form Emil Forsberg.

The match complexion changed when when Sweden defender Marcus Danielson was sent off nine minutes into extra time.

Sweden looked resigned to taking the game to penalties but Dovbyk had other ideas, expertly heading in Zinchenko’s cross from the left to settle the contest and send Ukraine into uncharted European Championship territory.

A small contingent of Ukraine supporters were at Hampden Park to witness their side’s first-ever appearance in a European Championship knockout round, and they nearly got off to a dream start as Roman Yaremchuk was denied by a smart Robin Olsen save.

Sweden were causing problems in an entertaining opening too, but it was Ukraine who edged in front, with Manchester City’s Zinchenko hammering home after 27 minutes having been picked out by a sumptuous Andriy Yarmolenko pass with the outside of his boot

Having fallen behind in the tournament for the first time, Sweden looked short of ideas and needed a slice of luck to get themselves back into the game, with Forsberg’s speculative strike taking a huge deflection before finding the net just before halftime.

Forsberg, who has four goals in the tournament so far, one behind leading scorer Cristiano Ronaldo, then followed Ukraine’s Serhiy Sydorchuk in hitting the woodwork after the break, not once but twice.

With neither side able to find a winner, extra time followed and Sweden’s task was made all the more difficult as Danielson was sent off for a high and dangerous tackle on Artem Besedin, after a VAR review.

Both teams tired and another last-16 penalty shootout seemed inevitable, after the drama of world champions France’s exit on Monday, but Ukraine had one final attack in them with Dovbyk stealing the headlines.

Ukraine coach Andriy Shevchenko ran down the sideline to celebrate the goal that sent his team to Rome to face England on Saturday – with the winners of that match to take on Denmark or Czech Republic in the semi-finals.