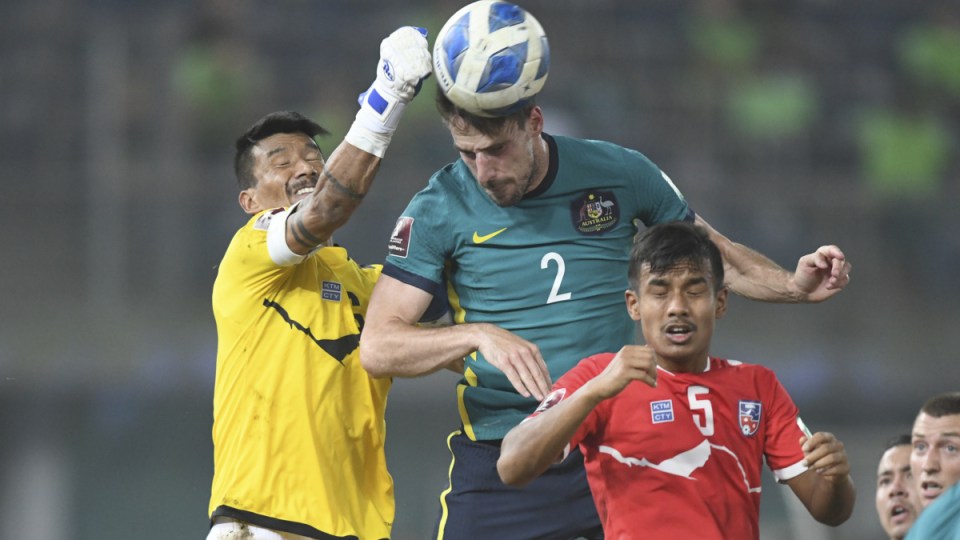 The Socceroos have progressed smoothly into the third round of qualifiers for the World Cup, guaranteeing top spot in Group B with a 3-0 win over Nepal.

First-half goals from Mathew Leckie and Fran Karacic had Graham Arnold’s side sitting comfortably at Kuwait’s Jaber Al-Ahmad International Stadium, before Martin Boyle’s close-range finish made it 3-0 after the break.

With seven wins from seven games, Australia are through to the next round of qualification regardless of the result of their fixture against Jordan on Wednesday morning.

The victory also stretched the Socceroos’ winning streak away from home to six – a run not accomplished since the 1960s.

“The most pleasing aspect was the amount of chances we created,” coach Arnold, whose side had 28 shots, with 12 on target, said.

“We came here to do a job and haven’t finished yet. We’ve played seven games, [secured] 21 points and we’re striving to finish this off with eight wins.”

Once again, Arnold rotated his squad for the contest, with Mitch Duke and Harry Souttar the only players to retain their starting role from the side that downed Taiwan 5-1
on Tuesday.

Sydney FC goalkeeper Andrew Redmayne was handed his first action of the campaign, while Melbourne City’s Connor Metcalfe made his first international start.

The Socceroos struck early when Aziz Behich picked out Leckie with a ball from the left that the 30-year-old powered home with a header in the sixth minute.

Ranked 171st in the world, the Nepalese offered little in the way of attacking threat but, labelled “heroes” by their coach after the game, produced a dogged defensive display.

Nonetheless, continuing to press his case to become Australia’s long-term right-back, Karacic netted his maiden international goal, turning in a Leckie cutback to make it 2-0 in the 38th minute.

Moments before halftime, Nepal were reduced to 10-men after defender Rohit Chand was adjudged to have unfairly brought Boyle down from behind as the attacker broke in on goal and was shown a red card.

After squandering two chances, Boyle made it 3-0 in the 57th when he poked home from an inch-perfect pass from his Hibernian teammate Jackson Irvine.

It was almost 4-0 just two minutes later, but Leckie’s flicked on header from an Ajdin Hrustic corner rebounded off the post and back into play.