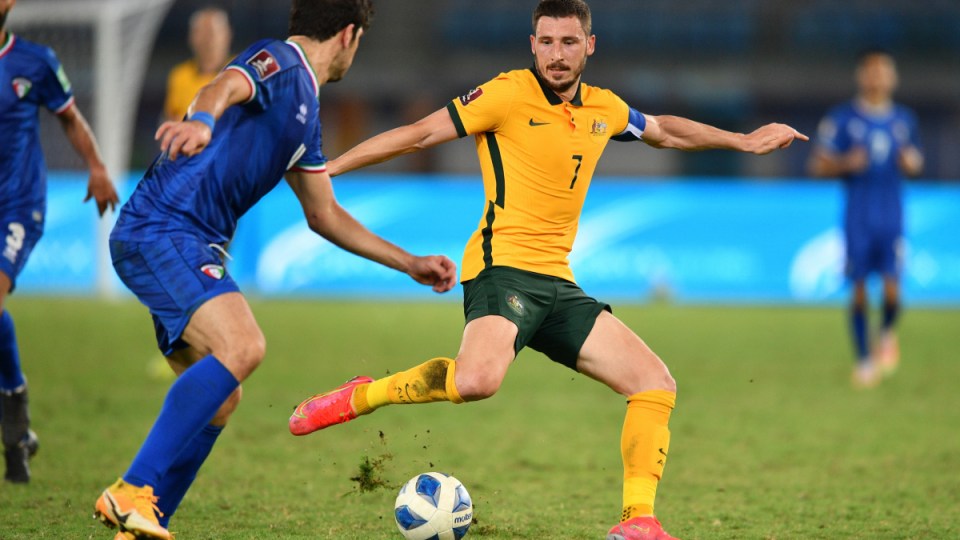 Mathew Leckie was among the goal scorers as the Socceroos defeated Kuwait. Photo: EPA

The Socceroos have marked their return to the international fray with a comfortable 3-0 victory over Kuwait in their World Cup qualifier.

Playing for the first time in 567 days, Australia dominated from the outset in humid conditions in their AFC round two Group B clash in Kuwait City.

Mathew Leckie nodded the Socceroos in front in the opening minute, with Jackson Irvine adding a second in the 24th, while Ajdin Hrustic rounded out the victory with a delightful second-half free kick at Jaber Al-Ahmad International Stadium.

The result takes Graham Arnold’s side five points clear of Kuwait at the top of group B, with a game in hand.

Arnold labelled Hrustic a star of the future after the young playmaker took centre stage in Australia’s return to international football against Kuwait.

Arnold noted Hrustic, 24, was a “completely different player” since moving from Groningen in the Netherlands to Bundesliga outfit Eintracht Frankfurt.

“I do believe that he’s going to be one of the stars of the future, of the new generation,” he said.

“He’s got a great work ethic, a great professional kid, great kid overall, and he’s a joy to work with.”

Hrustic starred on his starting debut as playmaker while Fran Karacic impressed on debut at right-back and Kenny Dougall and Riley McGree made their first international appearances in the second half.

James Holland started at defensive midfield in his first international appearance since 2014 while Ryan McGowan returned to the starting XI for the first time since 2017.

Australia dominated from the outset and quickly made it count when Leckie, wearing the captain’s armband, rose between two defenders to bury Aziz Behich’s looping ball to the back post.

In the 23rd minute, Hrustic earned an arguably soft penalty when Fahad Al Ebrahim was ruled to have clipped his ankles as he skipped through.

Martin Boyle’s spot-kick was well-saved by Sulaiman Abdulghafoor but a fleet-footed Irvine smashed home the rebound.

The Socceroos could easily have extended their first-half lead while Kuwait created a couple of speculative chances on the counter.

Mat Ryan made a good reflex save to deny Shabaib Al-Khaldi at his near post in the 62nd minute.

Four minutes later, Hrustic stepped up and buried a wonderfully struck free kick in off the post to seal three points.

Dougall capped off his week, where he scored two goals in the League One play-off final to secure Blackpool promotion to the English Championship, with a debut in the 64th minute, while McGree was called upon in the 83rd.

It was an impressive performance from the Socceroos for whom the “outstanding” Fran Karacic impressed on debut at right-back as Kenny Dougall and Riley McGree made their first international appearances in the second half.

James Holland started in defensive midfield for his first start since 2014 while Ryan McGowan returned to the starting XI for the first time since 2017.

The win takes the Socceroos five points clear of Kuwait at the top of their World Cup Qualifying Group B after a fifth win in five games.

The Socceroos will now turn their focus to the clash with Taiwan, which kicks off at 5am Tuesday AEST.

“That (performance is) only 20 per cent of what you’re going to get from this team,” Arnold said.

“I expect a big improvement from the players – (they were) at times a little bit rusty and turned over possession a bit easy but this team is only going to get greater and greater.”