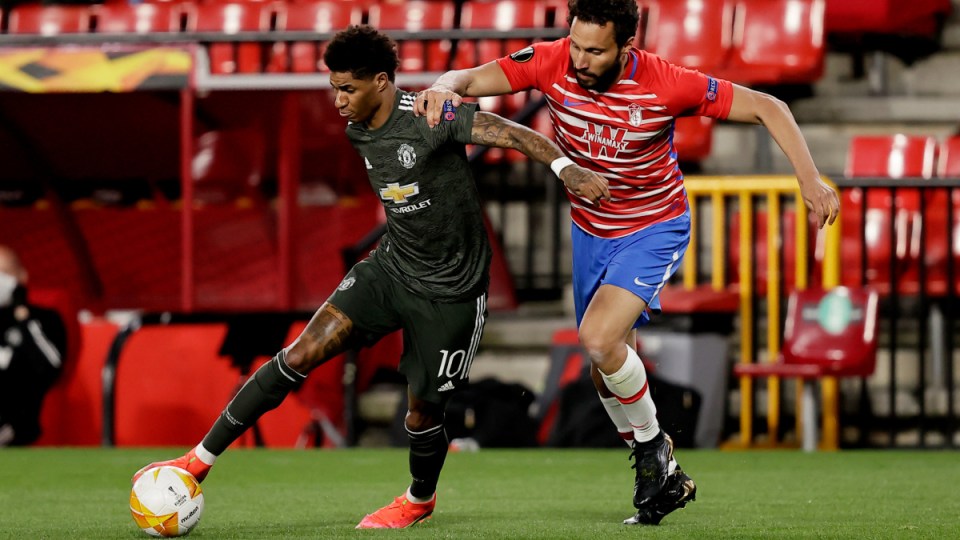 Manchester United’s Marcus Rashford and Bruno Fernandes secured a hard-fought 2-0 victory at Granada in the Europa League quarter-final first leg to put their side in the driving seat.

In a game where clear-cut chances were sparse, Rashford’s goal just past the half hour was the standout piece of quality.

The England forward controlled a long ball from Victor Lindelof before coolly finishing to put United ahead and notch up his 20th goal of the season in all competitions.

Granada fought valiantly for a way back into the game, with Chelsea loanee Kenedy testing David de Gea from long-range before Yangel Herrera – on loan from Manchester City – hit the post with a volley.

Fernandes, denied a second goal by a save from Portuguese countryman Rui Silva from close range late on, then netted a stoppage-time penalty after being felled by Yan Brice Eteki.

United boss Ole Gunnar Solskjaer told BT Sport: “It was not a perfect night. We got three yellow cards and three suspensions. 2-0 is very good result.

“It was a very good run by Rashford, he takes the ball fantastically. Bruno is so confident on penalties even though the keeper almost saved it.

“We want to win every game. It’s still a young team. We can’t have any other approach.”

The return leg is next Thursday at Old Trafford and the winner of the tie will face the victors in Ajax Amsterdam’s clash with AS Roma in which the Italians hold a 2-1 lead from their first away leg which was also played on Thursday.

Arsenal conceded in injury time to draw 1-1 with Slavia Prague in their first leg.

The Gunners paid the price for a lack of concentration after failing to defend Nicolas Pepe’s 86th-minute opener.

Goalkeeper Bernd Leno made a fine save to deny Lukas Provod in injury time, but couldn’t stop Tomas Holes from grabbing Prague’s equaliser from the resultant corner.

He told BT Sport: “The game is under control, we had got the goal we wanted, but we put ourselves on the back foot.

“We conceded a corner, they put bodies in the box and anything can happen. Of course it changes the feeling after the game.”

Roma also came from behind to win 2-1 at Ajax while Villarreal won 1-0 at Dinamo Zagreb.