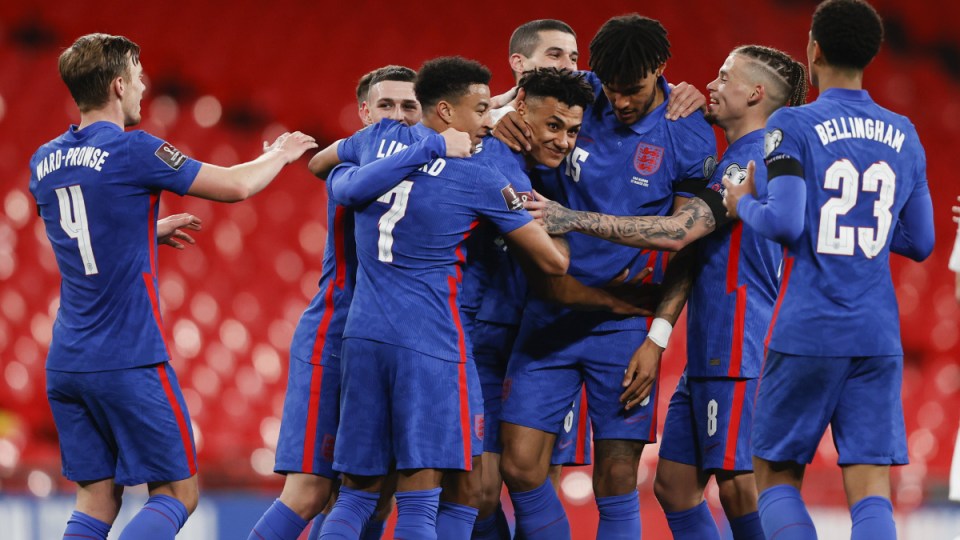 England has kicked off its World Cup qualifying campaign with a 5-0 thrashing of San Marino as Dominic Calvert-Lewin scored twice and Ollie Watkins marked his debut with a goal.

On a Wembley night when Gareth Southgate could have dispensed with defenders altogether, England toyed with FIFA’s lowest-ranked nation, which rarely made it past the halfway line on Thursday.

San Marino held out for 13 minutes before James Ward-Prowse opened his England account with a smart finish and Calvert-Lewin made it 2-0 seven minutes later with a header.

Raheem Sterling, who missed a succession of early chances, made it 3-0 just after the half-hour mark at which point it seemed England might be heading for double figures.

To their credit, San Marino’s part-timers dug deep in the face of a siege with Calvert-Lewin’s second goal, a tap-in, the only addition to the score until substitute Watkins slotted in late on as England moved top of Group I.

“It’s unbelievable, it’s what I’ve dreamt about to be honest. I’m speechless,” Watkins, who scored on his international debut, told ITV.

“It’s been a good journey. I just feel honoured that I can come out here and pull on the shirt and get the chance to play with the players I’m playing with and even score on my debut. I couldn’t write it, I’m over the moon.”

Spain, meanwhile, was left frustrated after being held 1-1 by Greece in Group B.

Alvaro Morata opened the scoring from close range for the hosts after 32 minutes, moments after Dani Olmo had rattled the crossbar from distance.

However, shortly before the hour mark, substitute Inigo Martinez – on for captain Sergio Ramos – was penalised for a rash tackle on Greek midfielder Giorgos Masouras.

Anastasios Bakasetas smashed the ball in from the spot to stun Luis Enrique’s side.

Italy began its qualifying journey with a comfortable 2-0 win over Northern Ireland with the Azzurri trying to rectify their failures from four years ago.

Italy didn’t qualify for the 2018 World Cup in Russia – missing the tournament for the first time in six decades – but cemented its status as Group C favourite as Domenico Berardi and Ciro Immobile scored in the first half in Parma.

Robert Lewandowski struck a thunderous 83rd-minute equaliser as Poland fought back to earn a 3-3 draw with Hungary while Germany scored twice in the first seven minutes to open with a 3-0 win over Iceland.

Leon Goretzka and Kai Havertz were on target early on and Ilkay Gundogan was the other goalscorer to help Joachim Loew’s team rebound from a 6-0 humiliation in Spain in their last match in November.

John McGinn’s superb overhead kick rescued a point for Scotland in the 85th minute of its clash against Austria as Steve Clarke’s side twice came from behind at Hampden Park to seal a 2-2 draw.