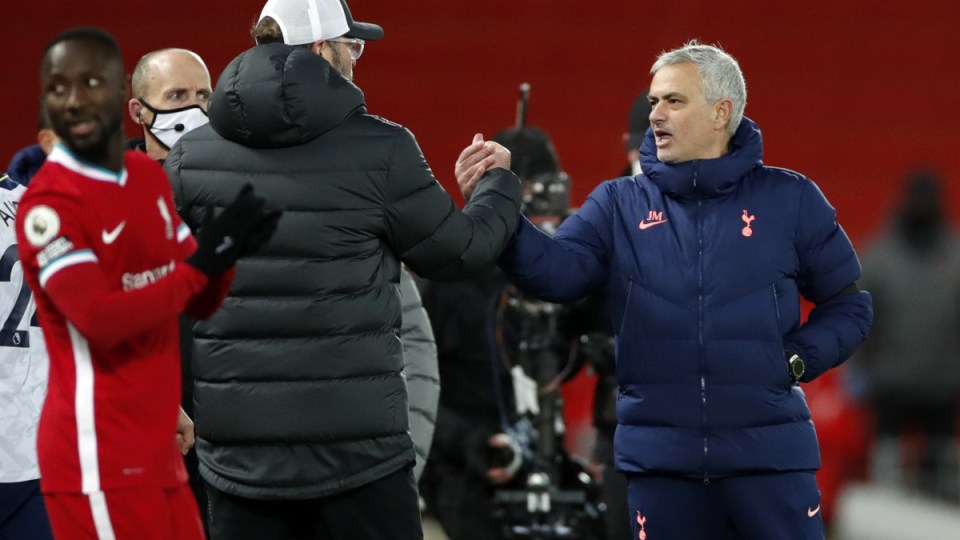 Tottenham Hotspurs manager Jose Mourinho, right, is not interested in how he is perceived as his approach to games comes under increased scrutiny. Photo: AP

Tottenham boss Jose Mourinho is not interested in how he is perceived as his approach to games comes under increased scrutiny.

Mourinho has attracted criticism for the way he has set up his side this season, allowing opposition teams possession and territory and hitting them on the break.

It worked against Manchester City and Arsenal and came close to landing their biggest prize yet at Liverpool on Wednesday, but Spurs were not clinical in front of goal and succumbed to a late 2-1 loss.

Despite his critics, Mourinho has guided Spurs to second in the Premier League and they sit above Manchester United, City, Chelsea and the Gunners.

The Portuguese says there might have been a time when his public perception mattered to him, but not any more.

Asked whether he was frustrated at how he is viewed, Mourinho replied: “No. That’s fine for me. I’m not working in the search of any recognition.

“OK, 15 years ago when I arrived and I was probably a bit too arrogant for what you were used to, maybe yes, maybe I was. But I’m not.

“I work for my club, I work for my players. I try to give happiness to the people that love my club where I work.

“I am very ambitious, that didn’t change at all. I think you can still read on my face that to lose hurts me the same, nothing changes.”

But Mourinho, who had a touchline disagreement with Klopp at Anfield on Wednesday, believes Bayern Munich’s Hansi Flick would have been a more worthy winner.

“I think the only chance for Flick to win is that Bayern find two or three new competitions for him to win,” he said.

“So maybe if he wins seven titles in one season, maybe he wins the award.

“I believe he only won Champions League, Bundesliga, Pokal, the name of their cup, European Cup, German Super Cup … he only won five. And the biggest one of all.

“Poor Flick. I think the only chance is for Bayern to find two or three more trophies to see if he can win it.”