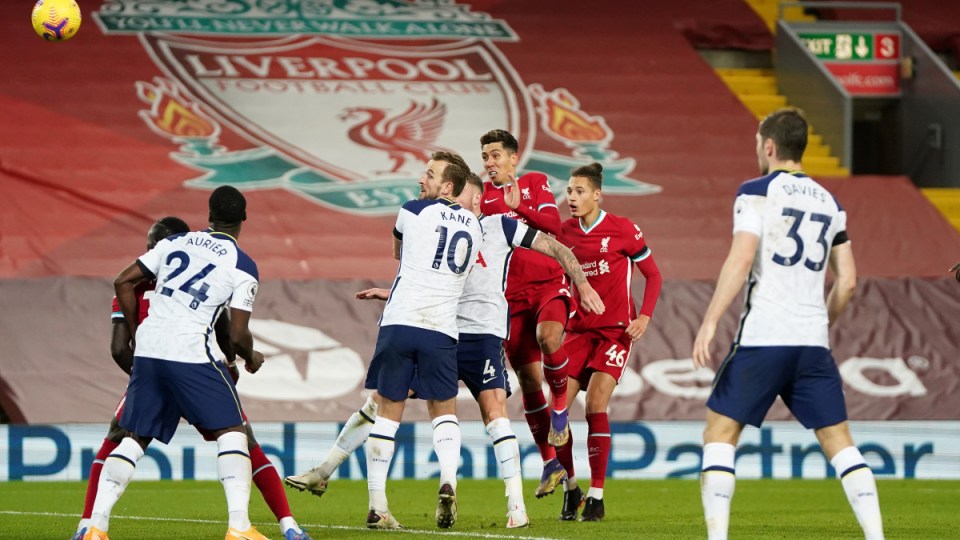 Roberto Firmino’s 90th-minute header sparked wild scenes at Anfield as defending champions Liverpool returned to the top of the Premier League table with a 2-1 win over previous leaders Tottenham Hotspur.

In a victory reminiscent of so many which carried them to their first title in 30 years last season, the hosts’ relentlessness was rewarded when the Brazil international powered home a header from Andy Robertson’s corner with the seconds ticking down.

Spurs boss Jose Mourinho looked sickened, having assumed his men had done enough to earn the point which would have kept them at the summit.

Liverpool had comfortably out-shot their opponents during the 90 minutes, in which they enjoyed 76 per cent possession, but saw Mohamed Salah’s deflected goal cancelled out by Son Heung-Min in the first half.

Steven Bergwijn hit the post for Spurs at 1-1 and Harry Kane headed over from close range from corner before Firmino struck late.

The result extended Liverpool’s unbeaten home run to 66 matches and they are now three points clear of Spurs at the top.

Southampton are third after a 1-1 draw at Arsenal, where former Gunners winger Theo Walcott put the visitors ahead.

Arsenal captain Pierre-Emerick Aubameyang equalised seven minutes in to the second half and though Gabriel was sent off for two yellow cards in quick succession, Mikel Areta’s side hung on for a point to leave them 15th.

Leicester City missed the chance to go top, for at least a couple of hours, as they were upended 2-0 at home by Everton.

Richarlison and Mason Holgate scored the goals to drop Leicester to fourth and lift Everton to fifth, just one point behind them.

Patrick Bamford scored the first goal as Leeds United came from behind to hammer Newcastle 5-2 to go 13th.

Fulham moved out of the bottom three after a 0-0 draw with Brighton & Hoe Albion while Christian Benteke scored and was sent off as Crystal Palace drew 1-1 at West Ham United.