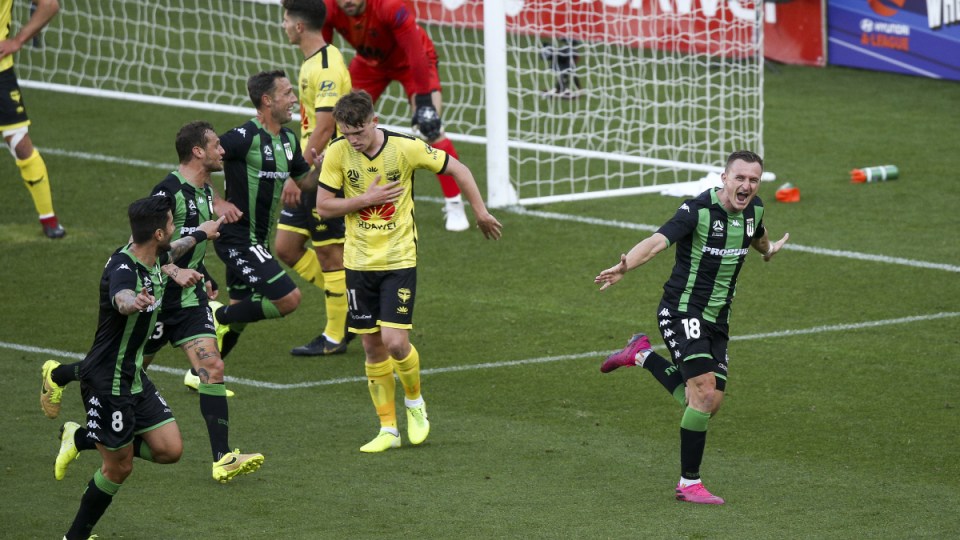 Western United has wasted no time leaving its mark on the A-League, beating Wellington Phoenix 1-0 on the club’s competitive debut.

Besart Berisha took the first-ever touch by a United player and scored the club’s first goal, netting a first-half volley to get the expansion club up and running.

Mark Rudan’s side will face tougher opponents this season – the Phoenix were listless and non-threatening for much of Sunday’s clash.

But on this evidence, Western’s expensively assembled and hyper-experienced outfit will make good on their promise to challenge for the finals in their first campaign.

Alessandro Diamanti pulled the strings in midfield, Connor Pain was bright out wide and Dario Jertec was a fine foil in the middle.

United looked well-drilled from the off, even as Andrew Durante – marshalling the three-man defence at age 37 – was jeered relentlessly by fans of his former club.

Nix fans also delivered an unwelcoming return for Mark Rudan, booking him throughout.

One fan brought a particularly scathing “One Thief, Three Traitors” banner; a reference to Rudan and the players which defected from the Nix to the expansion side.

It was another player that might have been in Wellington colours that hurt them the most.

Berisha’s 34th-minute goal, his 117th A-League strike, was all the crueller for the Phoenix given the ex-Melbourne Victory and Brisbane Roar title-winner turned them down to sign with Western.

He was left unmarked to volley home Josh Risdon’s cutback

The result may foreshadow a season of struggle for Ufuk Talay’s side.

As predicted, without a proven goalscorer in his side to replace Roy Krishna and David Williams, Wellington struggled to create chances.

Hyped Mexican signing Ulises Davila didn’t leave an impression and Filip Kurto only had one memorable save to make: from Liberato Cacace’s long-range bomb.

Alex Rufer should have equalised with 20 minutes remaining from Callum McCowatt’s volleyed centre, only to struggle to deal with the pace of the cross.

Stefan Marinovic then produced a top-drawer save to deny Scott McDonald a goal on his return to Australian club football more than two decades after he left it.

McCowatt, a highly-rated attacking prospect, saw plenty of the play on debut, but like his young teammates, will need to improve quickly.

Matches against last season’s grand finalists come next, before away days against Melbourne’s other two teams in a challenging first month for Talay and his team.

Perth coach Tony Popovic agrees with the VAR decision to award Brisbane a dramatic late equaliser in their 1-1 A-League draw at HBF Park.

The Glory appeared headed for victory on Sunday courtesy of a 34th-minute goal from Chris Ikonomidis in front of 9829 fans.

But in a drama-filled finish, Brisbane had a goal disallowed for offside in the fifth minute of stoppage time, only for the VAR to overturn the decision.

Goalscorer Roy O’Donovan was initially in an offside position when star Roar recruit James O’Shea chipped the ball to Aaron Holloway in the box.

O’Donovan was back onside by the time Holloway headed the ball across to him, and he dived low to drive the header into the net. The linesman initially ruled the goal out for offside, but it was overturned on review.

That happens every week in football. The second phase, he (O’Donovan) wasn’t offside, so it was a goal.”

New Roar coach Robbie Fowler celebrated wildly when his team were awarded the goal, and he felt the VAR decision was right.

“In all honesty, I’m not a massive fan of (the VAR in general), but that might be changing tonight,” Fowler said.

“There was a player, maybe in an offside position, but it wasn’t the player who headed the ball across. He (Holloway) was onside.

“And when (Holloway) headed it back to Roy, he was onside. The rules are if you’re behind the last man, you’re ok. It was proven to be the right decision.”

Fowler fielded an astounding nine club debutants in his starting XI, while Perth had just three.

A-League: The west is history, Berisha makes his mark