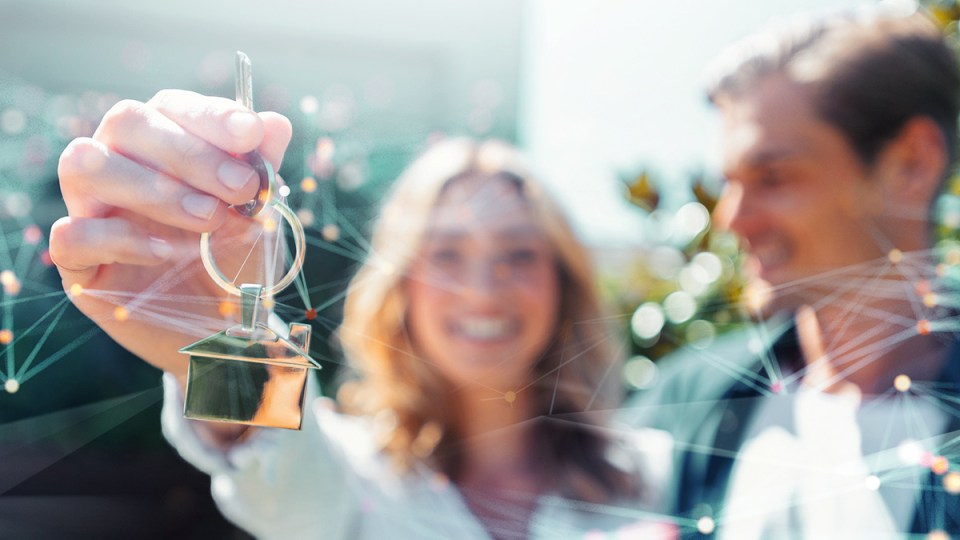 Home buyers should consider the risks before snapping up the government's home guarantee. Photo: The New Daily

From July 1, the First Home Guarantee will offer 35,000 first-time buyers the chance to break into the market with just a 5 per cent deposit.

The scheme will help many buyers move into their first home faster than they otherwise would have done.

But buying with a wafer-thin deposit can have significant downsides.

The scheme is essentially a rebadging of the First Home Loan Deposit Scheme (FHLDS).

It lets first-home buyers get into the market with only 5 per cent on the table and with zero lenders mortgage insurance.

First-home buyers who signed up to the FHLDS when it launched in January 2020 have done nicely out of it.

Back then, the median home value nationally was $545,622, according to CoreLogic.

But the 35,000 first-home buyers able to tap into the First Home Guarantee from July 1 face very different market conditions.

NAB and the Commonwealth Bank both expect the Reserve Bank’s cash rate to rise from 0.1 per cent to 1.25 per cent by June 2023.

Westpac is expecting a 0.4 percentage-point hike as early as June, with a forecast for the cash rate to reach 2 per cent in the next 12 months.

If this happens, variable home loan rates can be expected to jump by at least one percentage point.

Reserve Bank data shows home buyers with deposits of less than 20 per cent are currently paying an average rate of 2.73 per cent.

Table 1 shows the possible rise in monthly repayments if that rate climbs to 3.73 per cent.

In New South Wales, for instance, where the average first-home buyer loan is $589,049, monthly repayments could increase by $311, adding an extra $3732 annually to household budgets. 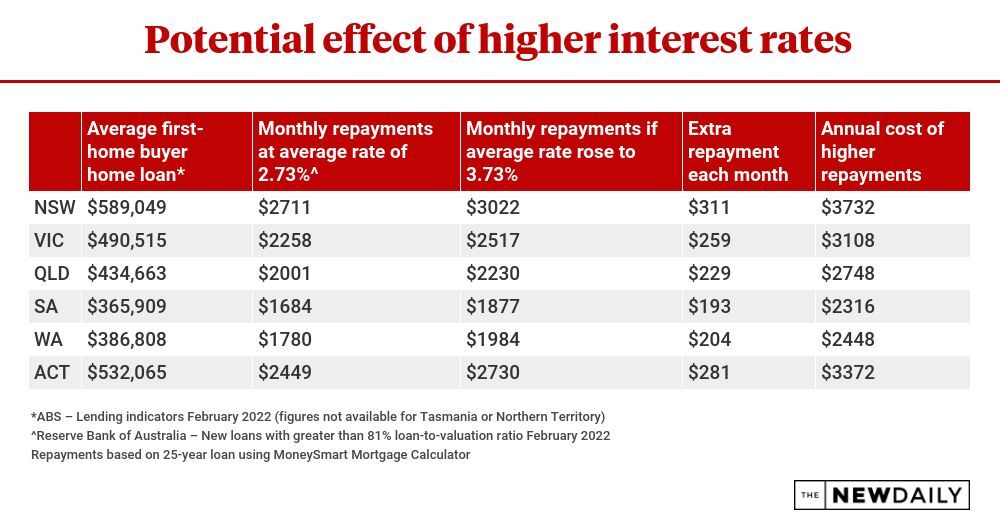 Refinancing may not be an option

The downsides of buying with a 5 per cent deposit can go beyond rising rates.

With anything less than 20 per cent home equity, borrowers looking to refinance to a cheaper loan are typically asked to pay lenders mortgage insurance – a cost that can easily top $10,000.

Locking into a fixed rate is one option for first-home buyers to shield against rising rates.

But this doesn’t eliminate another potential pitfall – the risk of negative equity.

As Angus Moore, economist with REA Group noted in a recent PropTrack report, “Price falls of as little as 5 per cent would take the (5 per cent deposit) borrower under water – owing more on their mortgage than their home is worth.”

It is not such a far-fetched scenario.

NAB, AMP Capital and the Commonwealth Bank all expect property values to drop in 2023 by at least 8 per cent.

The upshot is that first-home buyers need to stress-test their finances for the near-certainty of rising rates.

It’s also worth weighing up the potential risks of buying with a super-low deposit when values in some areas are expected to fall.

Buying your first home with a 5 per cent deposit? It pays to know the risks