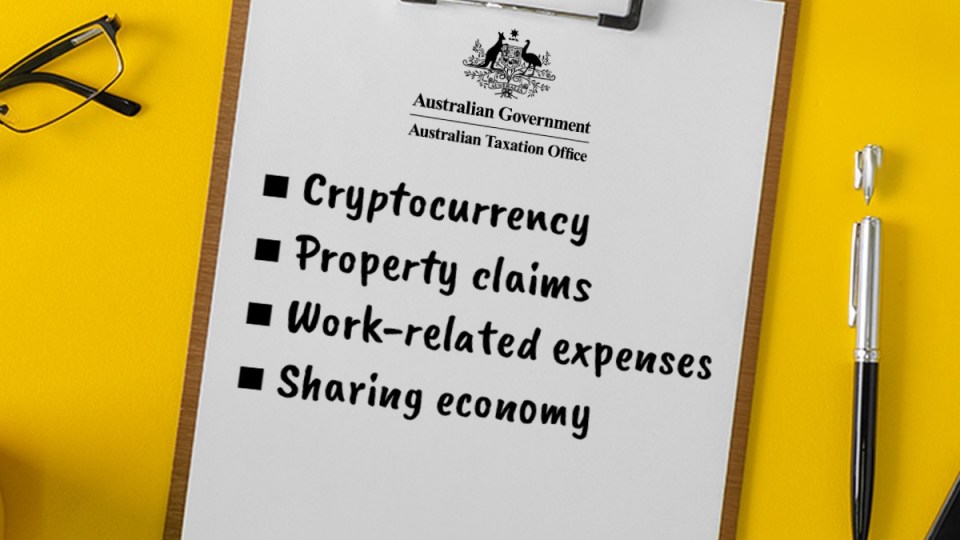 The ATO is cracking down on a series of taxpayers this financial year. Photo: TND

The New Daily regrets to inform readers that there’s less than three months until tax time.

And the Australian Taxation Office (ATO) is already preparing its so-called “hit list” of priority areas due for a crackdown in the 2021-22 financial year.

Property owners, crypto investors and those working in the gig economy will be front of mind for the tax office, according to accounting firm H&R Block.

Also on the list are claims for work-related expenses, an area that the ATO has marked as the biggest driver of Australia’s $8.7 billion annual taxation shortfall.

“[The ATO] have signalled that they’ll be looking closely at these deductions this year,” H&R Block said in a statement on Thursday.

If you’re covered by the ATO’s list then you’ll have some of the most complex tax affairs in the country and would do well not to leave everything until the last minute.

The ATO has identified dodgy work-related expense claims as the key driver of Australia’s tax gap – the difference between the tax people should pay and what they actually cough up.

With that in mind, these are the expense claims the ATO has its eye on:

H&R Block predicts the ATO will focus on people who claim a deduction for their property investments or holiday homes in 2021-22.

This is because the tax office recently reviewed the tax returns of some property investors and, worryingly, found errors in 90 per cent of them.

H&R Block says the ATO will be on the lookout for the following things:

H&R Block’s key tip for property investors is to get their records in order.

“The golden rule is: If you can’t substantiate it, you can’t claim it.”

Crypto is in the ATO’s crosshairs again this financial year after a huge effort to bring digital currency investors under the tax umbrella last year.

H&R Block says the ATO is looking at 500,000 to a million crypto owners in Australia, using data from prominent exchanges to capture everyone.

In other words, if you’re hoping to hide your crypto you’re likely to be caught out.

“The ATO believes that some of them [crypto owners] are failing to declare profits (and in some cases the losses) they are making on their investments,” H&R Block said.

“Remember, investing in cryptocurrencies can give rise to capital gains tax on profits. Trades can be taxed on their profits as business income.”

The sharing economy is also shaping up as a focus area again for the ATO – they’ve even published a few examples about their concerns.