‘It was a surprise’: Three in four parents underestimate the costs of raising a child

The survey of 1000 Australian parents found that one in three thought they had a good idea of how much it would cost, but realised after giving birth they had been overly optimistic.

A further 37 per cent said they had no idea how much lighter their wallets would be.

Ashlee Molnar, 28, and Jarod Lopez, 29, had their first child, Sienna, two years ago.

Ms Molnar said for the most part her expenses matched their expectations. But she noted that “costs pop up that you don’t expect”.

In her case, it was needing extra scans that were “a couple hundred dollars at a time”. And then there was the small matter of maternity leave.

Ms Molnar said she was surprised to learn after giving birth to Sienna that despite having consistently worked throughout her adult life she was ineligible for government-funded maternity pay.

This is because the time it took her to find a job after moving to Tasmania meant she no longer met Centrelink’s requirement to have worked 10 of the 13 months before the birth of her child.

“It was a surprise,” she said.

Ms Molnar took a little more than three months to find a job in Tasmania, and because she had Sienna only 10 months after moving, she failed to meet Centrelink’s aforementioned test.

“I went back to work relatively quickly, when Sienna was about 3½ months old … purely because not having any income from my side was difficult,” she said.

“It was really, really tough.”

Ms Molnar said she wished she had known about Centrelink’s work test while planning for Sienna, and has since warned a handful of girlfriends to avoid the same mistake.

She also wished she had saved more money before giving birth – a sentiment shared by 46 per cent of the parents who responded to CUA’s survey. 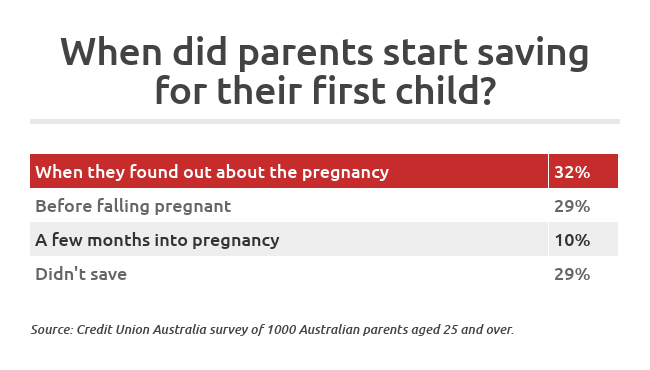 Since having Sienna, the couple have set up a separate bank account for household bills and set up payments on a weekly basis to avoid being hit by surprisingly high bills.

Ms Molnar said they also cut down on subscriptions – by sharing log-ins with friends where possible – and “worked really hard” to pay off their credit cards and car loans.

As a result, both parents are now able to work four days a week so they can spend more time together as a family – a goal they had set before moving to Tasmania.

Beyond Today Financial Planning director Antoinette Mullins said planning for the financial impact of having children made the whole process much easier.

She advised couples to develop a clear idea of their ideal family lifestyle so they could set some goals and determine how best to achieve them.

Some families might place a strong emphasis on travel and set up a separate fund so they can always afford a family holiday, while others might want to prioritise saving for a private education.

“I think the biggest mistake that couples make is that they focus on the very first question: How much money do I need to have a kid? But it’s not just about that, it’s about what sort of lifestyle do you want as a family?” Ms Mullins said. 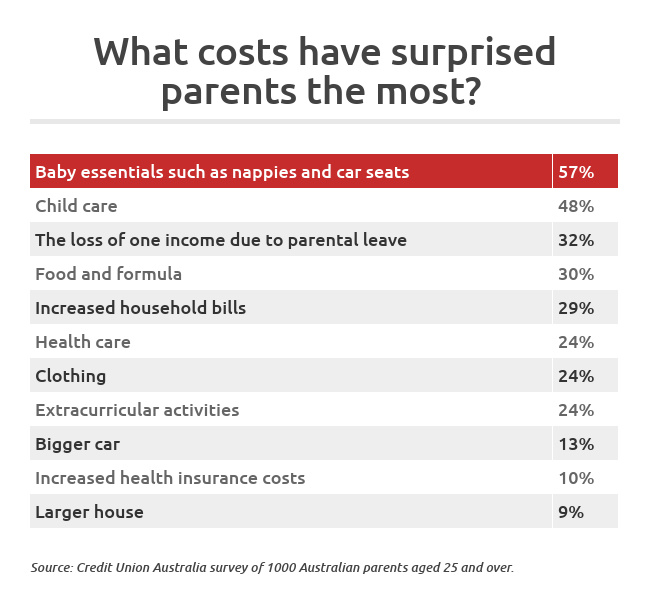 When it comes to saving enough cash to survive on one income during the parental leave period, Ms Mullins said a good general rule of thumb was to save at least six months’ fully budgeted expenses for the entire family.

If possible, she recommended saving 12 months of expenses to provide parents with even greater peace of mind, with CUA’s survey finding that one in five home owners had struggled to meet their mortgage repayments during the parental leave period.

‘It was a surprise’: Three in four parents underestimate the costs of raising a child