Don’t sweat on your bank cutting rates. This is how to save $4000 in a year

Cuts to fixed mortgage rates won the major banks favourable headlines on Wednesday, but they also exposed the raw deal given to existing borrowers.

A day after the Reserve Bank cut the official cash rate to a record-low 0.1 per cent, Commonwealth Bank was the first to pull the interest rate trigger.

The nation’s largest home loan lender slashed the interest rate on its four-year fixed home loan to 1.99 per cent, becoming the first Big Four bank to offer a mortgage rate with a 1 in front of it.

But NAB and Westpac soon followed.

NAB cut its four-year fixed home loan to 1.98 per cent.

The flurry of cuts made for good headlines.

But the banks’ decision to leave their standard variable rates unchanged has underscored the importance of shopping around for a better deal.

Consumer comparison site RateCity.com.au worked out how much the average owner-occupier could save if they switched from the average rate on the market (3.19 per cent) to the lowest rate (1.77 per cent, for a loan-to-value ratio of 60 per cent or less).

Assuming the mortgage holder has a $400,000 loan balance and 25 years left on their mortgage, they would save a whopping $4109 from switching banks in the first year alone.

This is almost seven times more than what they would save ($596) if they stayed put and their current lender passed on the RBA rate cut in full.

“I don’t know that people really understand just how much they can save,” RateCity.com.au research director Sally Tindall told The New Daily.

Of course, many NAB, CBA and Westpac customers could switch to a freshly reduced fixed rate to minimise their monthly repayments.

But fixed mortgages come with caveats.

Ms Tindall said they are “typically a lot less flexible, usually with no offset account, limits on extra repayments, and break fees if you want to get out early”.

And, during the worst recession in almost 90 years, many borrowers lack the means to refinance.

“Governor Lowe has said he believes this rate cut will be passed through as people refinance or renegotiate their home loan, but he’s forgotten about the thousands of Australians who aren’t in a position to do so,” Ms Tindall said.

“These are the people who need this rate cut. But based on the response from the banks so far, they’re precisely the ones who are going to miss out.

“Anyone who’s lost their job, or on a mortgage deferral or who simply don’t have enough equity in their loan to refinance are in mortgage prison.

“They can’t switch lenders. They either have to stick on a high variable rate or fix with their current bank.” 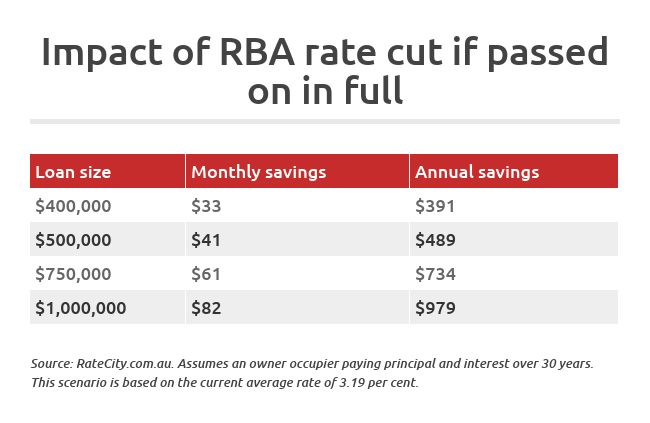 RateCity’s points to consider before fixing a mortgage

(As of the time of writing, ANZ had yet to respond to the RBA’s rate cut.)

Don’t sweat on your bank cutting rates. This is how to save $4000 in a year