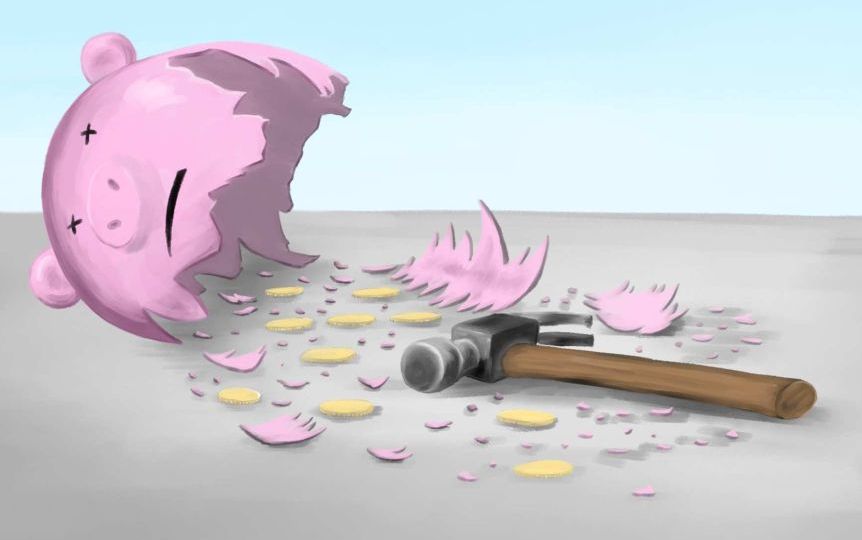 It might not be the worst problem to have during a recession, but for Australians with decent savings in the bank, record low interest rates are posing a dilemma.

As expected, on Tuesday the Reserve Bank lowered the country’s official cash rate to a fresh historic low of 0.1 per cent.

It had already bottomed out in March at 0.25 per cent.

Although the cash rate is just a benchmark, it sets the precedent for the interest rates that the banks go on to offer everyday Australian consumers.

Much of the focus often ends up on how this affects people’s home loan repayments.

And right now, if you are lucky enough to have a stable salary, the interest repayments on your home loan have probably never been more manageable.

But every action has a reaction.

One way for the banks to balance out the books is to lower the deposit rate.

That is the rate that determines how much money a financial institution gives you for putting money in one of their accounts. You will likely know it as the little sweetener that appears on your monthly statement.

And in the past six months, the big four and independent banks have been slashing their deposit rates. 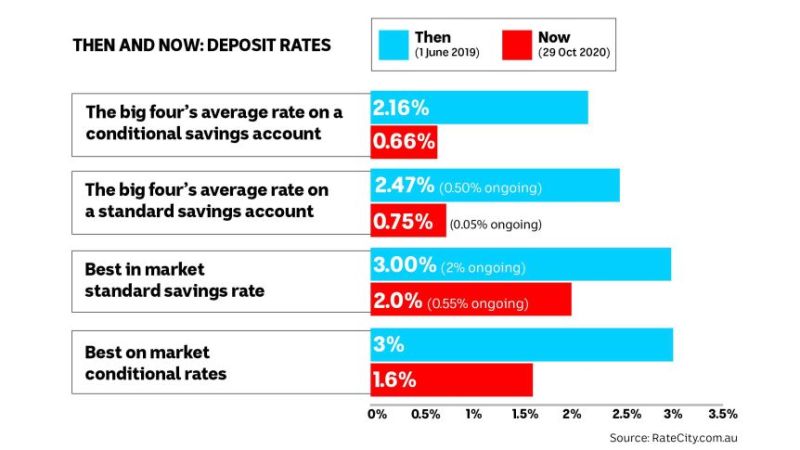 When it came to the majors, RateCity found NAB was offering a slightly better rate than the others until last week, when it lowered its rate for the fourth time since March.

Independent small banks have generally been more competitive in this space.

On Sunday, the institution that was offering the highest rate to Australian customers, Up Bank, also decreased what it’ll pay its customers for banking with it.

Even children are being affected. Commonwealth Bank has slashed the rate on its famous Dollarmites account for youth four times since March.

“This unprecedentedly low-interest rate environment does mean we regularly review our products and make changes to some of our deposit and savings interest rates,” a spokesperson said in a statement.

What does this mean for my savings?

Sometimes customers get a “bonus rate” for not taking too much out.

The base rates are now so low there isn’t anywhere to cut.”

On that amount, they would be making roughly $10 a month in interest, compared to about $30 in June 2019 when deposit rates were higher.

Deposit rates are also dropping on longer-term conditional savings accounts, which people sometimes put cash in when they’re saving for a bigger investment, such as a car or home deposit.

Right now, customers who deposit savings in a fixed-term account and do not touch the money for six months do not get as big a reward as previously. 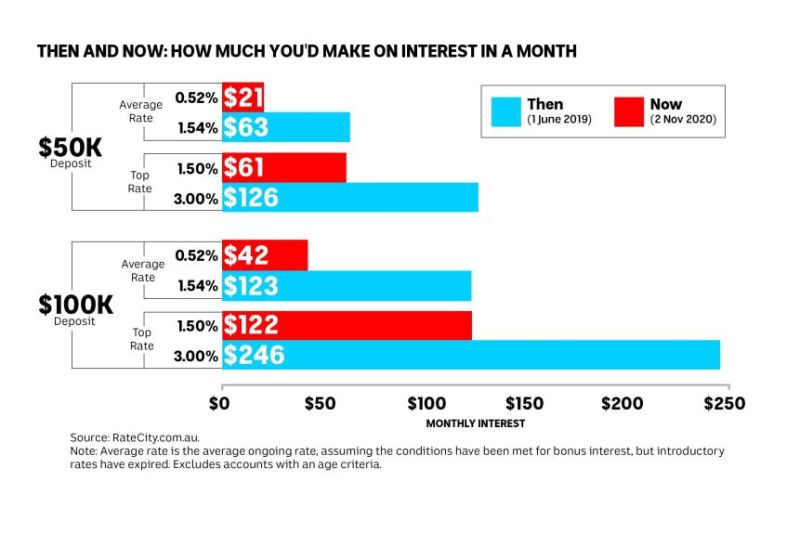 Sydney university student Will Grant is one young saver who has noticed a reduction in his deposit rate.

He has been saving for his first car for the past 12 months.

In recent months, the commerce student noticed that his bank had dropped his deposit rate down to 0.75 per cent.

“That was pretty low,” he said.

So I thought I should put my money into something else where I could make more money.”

He has now put 15 per cent of his savings into the stockmarket to try and make better gains.

“Dad has been guiding me through it and telling me what to do or what not to do,” the 20-year-old said.

A club that Mr Grant is affiliated with, the Youth Investment Group, said it had noticed a trend of more younger Australians putting money into stocks during COVID-19.

Mr Grant said he might put more money into stocks if deposit rates do not improve, but that he would always be keeping a large amount in savings due to their much lower risk.

Bank deposits of up to $250,000 are guaranteed by the federal government.

Whereas, if you invest in stocks that fail, there is nothing protecting your losses.

RateCity’s Ms Tindall cautioned savers to remember this before pulling money out of the bank.

“There is a concern that young people will go out and seek riskier alternatives,” she said.

But it’s always worth shopping around as there are some banks who want your business more,” she said.

What if I have heaps wrapped up in savings?

For most Australians, a decrease in deposit rates will be at worst annoying, but the change is noticeably affecting a certain portion of wealthier Australians.

Sarah Gonzales is a financial planner who advises retirees on what to do with their superannuation funds.

The majority of her clients have between $1 million to $5 million portfolios, and many have some of that money in conditional savings accounts that previously would have been giving them a tidy amount of interest.

“For a client with significant cash in their portfolio, they would rely on (the interest) to pay for their living expenses,” Ms Gonzales said.

While deposit rates have been especially low during COVID-19, Ms Gonzales said her clients had been noticeably impacted by lowering rates from mid-2019, when the Reserve Bank cut the cash rate to a then-low of 1.25 per cent.

She said some of her retired clients were currently mulling taking some money out of bank deposits and putting it into property instead, to see if that could get them better returns.

“They are obviously seeing over the years what property values have done. But they’re cautious,” Ms Gonzales said.

For most of the clients, obviously the cash flow has declined, but since we’re in a situation where not many people are travelling or moving around, they’re adjusting their expenses and reducing how much they spend, to compensate for the reduced cash flow.”

Perth woman Jan Hollingsworth is a self-funded retiree who lives off her superannuation and does not take a federal government pension.

One year ago, she got so fed up with deposit rates on fixed-term accounts being so low, that she “threw the towel in” and brought all of her money into a standard savings account.

That has now put her in a tricky situation. Ms Hollingsworth is not getting noticeable interest back to live off, so she is eating into her savings as time goes on.

“I just have to do something as I can’t keep living like this,” she said.

Ms Hollingsworth is worried that her bank’s deposit rate will drop even further, now that the Reserve Bank has lowered the cash rate again.

The “deeming rate” was lowered this year by the federal government in a bid to help retirees like Ms Hollingsworth who have money wrapped up in savings.

After the Reserve Bank’s decision to slash rates further on Tuesday, federal Treasurer Josh Frydenberg said he would “continue to monitor” deeming rates and whether they needs to be adjusted further.

While today’s news is a good day for borrowers, (it) is tough news for savers,” he said.