Australians paid off their credit card debt in record numbers in May, according to Reserve Bank data.

But analysts say the debt repayments have come at the expense of superannuation, with the tax office having approved roughly $25 billion of early withdrawal claims from 2.4 million people.

New figures released by the Reserve Bank of Australia on Tuesday revealed credit card holders paid off $1.64 billion in balances accruing interest in May, according to comparison website RateCity.

That represents a 6.45 per cent fall in credit card debt accruing interest from April – the biggest monthly decrease in the metric’s history. 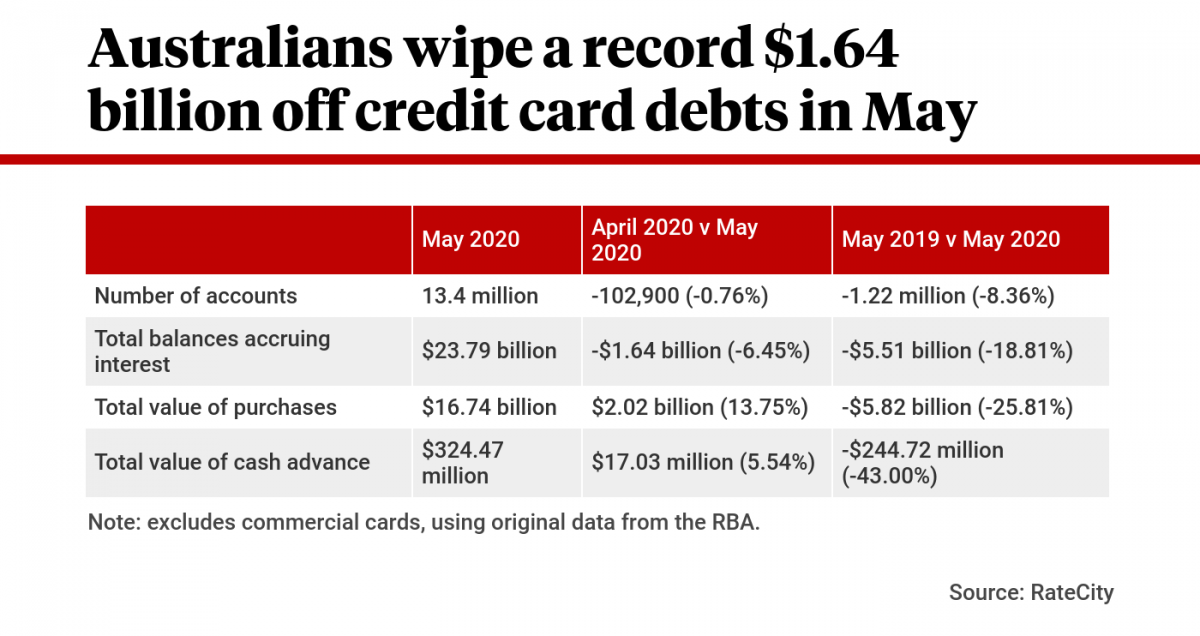 RateCity research director Sally Tindall said Australians had “taken the bull by the horns” after the pandemic forced them to review their household budgets.

But separate data suggests people financed their debt repayments by withdrawing money from their superannuation.

“The early access to super program is likely to have helped a lot of people to clear debts they’ve had hanging over their heads for years,” Ms Tindall said.

“The big question is whether these people will be able to stay debt-free from here on in.”

Data compiled by credit bureau illion and economic consultants AlphaBeta also suggests that members dipped into their retirement savings to pay off their debt.

Their analysis of 13,000 anonymised bank transactions last month found those who had used the early super access scheme allocated the largest segment of their withdrawals to servicing debt.

Members who used the scheme increased their spending by an average of $2855 in the first fortnight after their withdrawal – and $393 of that went towards paying down debt.

However, the report also highlighted members spent 64 per cent of their withdrawn super on discretionary spending, including on clothing, alcohol and gambling.

“It is sad to see that some people who got their hands on a lump sum spent on consumption, especially on things like gambling,” National Seniors campaign director Ian Henschke told The New Daily last month.

“But we take heart that the largest category of spending was to pay down debt.”

Canstar group executive Steve Mickenbecker told The New Daily that the RBA data suggested messaging on the importance of getting credit card debt under control was finally registering with card holders.

But he also said people were paying off debt in record numbers as they had fewer opportunities to spend their money.

“More are finding themselves at home on a reduced salary and concerned over job security – and with less opportunities to go to restaurants, bars and sporting events, we’re seeing people clearing their debt to prepare for the worst,” Mr Mickenbecker said.

He urged those saddled with debt to consider balance transfer and lower-interest cards, as accessing company hardship schemes could affect their credit rating.

“It would be reported on your credit rating as ‘under hardship’, which means that your lender has come to an arrangement to help you, but also highlights that you would be more likely to default in the future,” Mr Mickenbecker said.

Centaur Financial Services director Hugh Robertson said now is a time for households to enter “survival mode” to shore up their finances, instead of ramping up non-essential spending.

“It’s good to see people reacting appropriately to the times and making intelligent decisions, but it also shows people are scared, meaning they are more likely to pay down debt than spend,” Mr Robertson told The New Daily.

The Do’s and Don’ts of paying down debt, according to Centaur Financial Services director Hugh Robertson