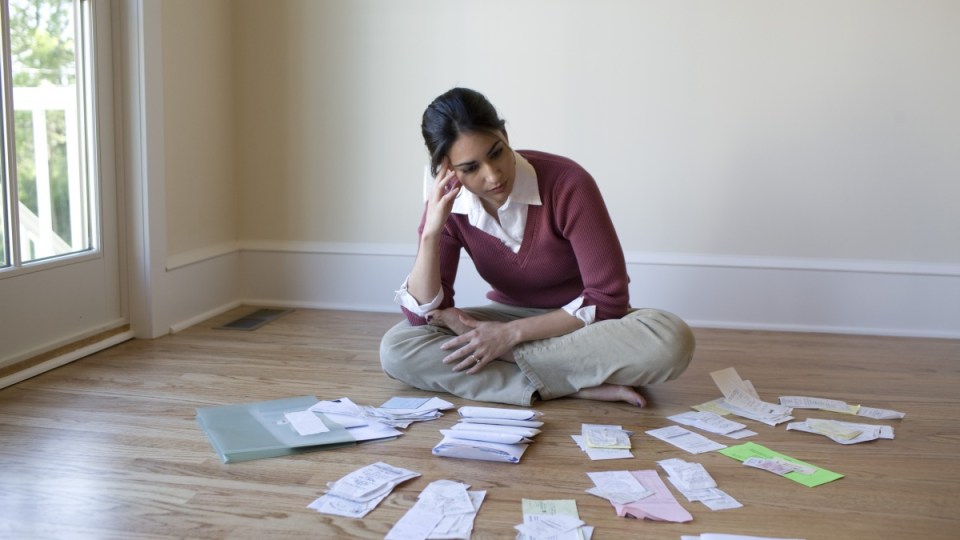 Switching a mortgage from one of the big four banks to the lowest rate on the market will save almost $85,000 over the life of a $400,000 loan, figures reveal.

As the big four banks face more pressure over their refusal to pass on interest rate cuts in full, research by comparison site RateCity.com.au has shown how much can be saved if a customer is prepared to switch to a lender other than a big four.

The first comparison shows the difference between switching from a discounted standard variable loan with one of the four majors (at 3.90 per cent), to the lowest rate on the market (currently 2.69 per cent offered by Reduce Home Loans). 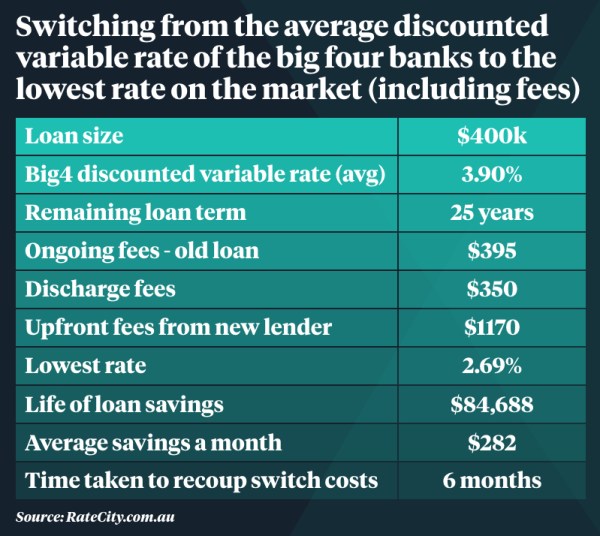 If you want the facility of an offset account linked to your mortgage, the new lender will charge a small premium on the interest rate (in this case 2.74 per cent), but according to RateCity, you will still save $272 a month and $81,612 over the life of the loan. 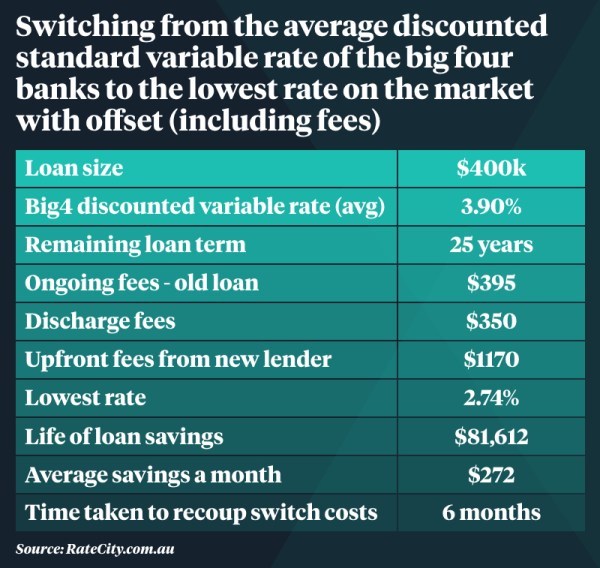 RateCity research director Sally Tindall said the low rates were not outliers, with 13 lenders offering variable rates below 3 per cent for owner-occupier mortgages, with the 10 lowest rates ranging from 2.69 per cent to 2.9 per cent.

The NAB-backed UBank, for example, was offering a variable rate of 2.84 per cent, while ING was offering 2.99 per cent.

“The thing is you don’t necessarily have to go to a smaller lender to get low rates, because banks big and small are offering rock-bottom rates,” Ms Tindall said.

And with the sluggish growth of new lending over the past two years, Ms Tindall said lenders were keen to sign any new business, so any borrower refinancing their existing loan was potentially in the box seat.

When considering a switch, though, it was important to consider what functions or facilities you want with the loan, as many of the lower-rate loans may be “quite basic” and not offer, for example, an offset facility, she noted.

Mr Hartzer told the ABC on Tuesday that if the aim of the Australian Competition and Consumer Commission inquiry was to increase competition and, consequently, reduce bank profits, home loan customers may bear the brunt of that.

Mr Hartzer explained that banks’ credit ratings are based primarily on their return on equity.

That credit rating in turn determines the interest rate at which banks can borrow money from wholesale lenders.

“If the rate of return [of a bank] falls too low, you don’t have the ability to absorb credit losses, and that puts your debt rating at risk,” he explained.

“And that raises the cost of borrowing for us on wholesale markets, which ultimately flows through to mortgage prices.”

Amid criticism of the big banks profiteering by not passing on the rate cuts in full, Mr Hartzer said a bank’s return on equity was key because earnings provided the “cushion” to cover any future losses.

“So if you don’t have a significant earnings cushion, then the ratings agencies conclude that in a downturn, your ability to continue to service your debts is going to be at risk and they are going to downgrade your debt.

“So there’s absolutely a link between maintaining an adequate return on equity and the debt rating that gets assigned to us.”

Notes: Calculations are based on a $400,000 home loan, with 25 years remaining on the loan term. Owner-occupier paying principal and interest repayments.

Fees include discharge fees, ongoing fees and upfront fees. Note that the ongoing and discharge fees are based on the most common fees charged by the big four banks.

Discounted variable rate is the package rate offered by the big banks, which includes the discount of the standard variable rate and an offset account.

Lowest rates offered are the lowest ongoing variable rates by the big banks. These rates do not include an offset account, but typically include no ongoing fees. Therefore the switch costs are lower and take longer to recoup.