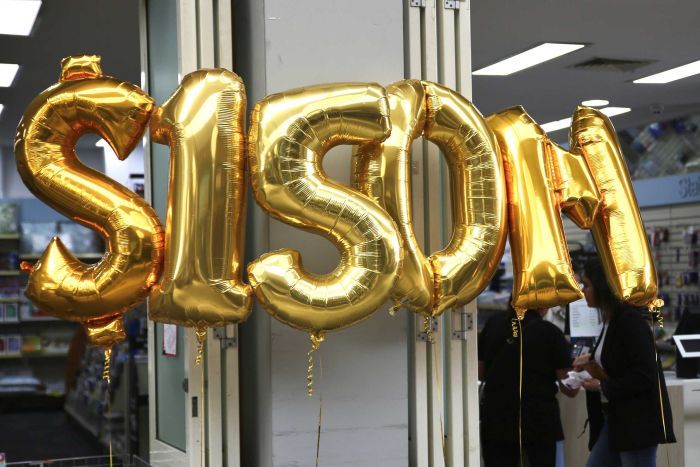 Australia’s biggest ever lottery prize, a division one jackpot of $150 million, is up for grabs tomorrow, but if you are joining the throngs rushing to get a ticket be warned — winning the nine-figure windfall could cause unexpected complications.

Nine weeks without a division one Powerball winner has seen the national prize jackpot to a level that dwarfs the previous record of $110 million.

Financial planner David Sharpe said if you do overcome the overwhelming odds and win that kind of figure, it might be worth keeping it quiet, at least for a while.

“Keep the news to yourself until at least you’ve made decisions around what you want to do. And then when you do tell people, keep it pretty tight,” he advised.

Money might not change you, but it certainly can change the relationship you have with others.

He said a sudden wealth disparity could be isolating, disconnecting people with those whose relationships they hold most dear.

“Receiving large amounts of money can actually cause a lot of loneliness and social isolation,” Mr Sharpe said.

“You might now be able to afford to have five-star dinners and take holidays, and your friends and family may not be able to.”

The quiet reality of a winning ticket

For divisions one, two and three, lottery agencies across the country have strict protocols in place to protect the privacy of winners.

WA agency Lotterywest dictates that when a winning ticket is scanned in a store, there are no bells and whistles or balloons falling from the ceiling.

Staff wait until the store empties or quietly take the winner to an office and tell them they need to contact lottery officials to verify the win.

The winning ticketholder then visits Lotterywest’s headquarters in the inner Perth suburb of Subiaco where they are directed to the “winners’ room”.

Here they are talked through the processes for collecting their winnings and, while Lotterywest does not give any financial advice, winners are also provided with the contact details for accountants and lawyers.

What comes in can go right back out

Mr Sharpe said while it was not well documented in Australia, international research showed there was a tendency for people who quickly came into money to swiftly lose it.

He said there were two common ways in which people churned through sudden unexpected wealth.

“One is they go and spend it on extravagant or exorbitant expenses — race cars or boats and the like,” he said.

“And the second is they get involved with investments they don’t understand, and they can quickly turn millions of dollars into zero.

“There’s an elegance to keeping things simple, that would be the first thing that I would suggest to people, and then get some expert independent advice to help make some smart decisions.”

Rule number one: take it slow

Mr Sharpe said the first thing to remember was there was no rush to spend any of your new-found wealth or make any life-changing decisions.

“I’m not necessarily a big fan of people quitting their job straight away, unless it makes you miserable going there each day,” he said.

He also warned that depending on the amount of money you come into, it may not be enough for the retirement you would like.

“There’s a myth out there that you need a million dollars [to retire],” he said.

“I call it the retirement myth because it’s a bit like asking, ‘What’s the perfect shoe size?’ — that depends on the size of your foot.

“It’s the same with your retirement, it depends on how much you want to spend and how old you are when you choose to retire. So how much you need is going to change depending on the person.”

Mr Sharpe said while there was a risk people would burn through their windfall too quickly, others went in the other direction and spent almost nothing because it was what they were used to.

“Sometimes [they need] a bit of a re-training, because what they think they can do and what they’ve known for decades is significantly different now,” he said.

Often people found joy in the realisation they could now afford to use their money to help family and friends.

One in three Australian adults was expected to play this week’s game, with a rush on tickets likely on Thursday evening before the draw.

Lotterywest expected up to 1,200 tickets would be sold every minute in Western Australia between 4:00pm and 5:00pm, with a similar trend in other states.

“In the past these big draws have just got so many people excited, generally we see queues at the retailers,” Lotterywest spokeswoman Jennie Fitzhardinge said.

“It is uncharted territory because we’ve never had $150 million before, but last financial year we had two jackpots over $100 million and our annual sales were increased by about 15 per cent.”

She said about a third of the funds from ticket sales went to Lotterywest grants and contributions, which last year totalled $281.7 million.

The previous largest lottery prize in Australia was when Powerball reached $110 million in July of this year.

That division one prize was shared by three winners — a family in Victoria, a young man from Adelaide and a Sydney couple.

WA had 58 division one lottery winners in the past financial year.