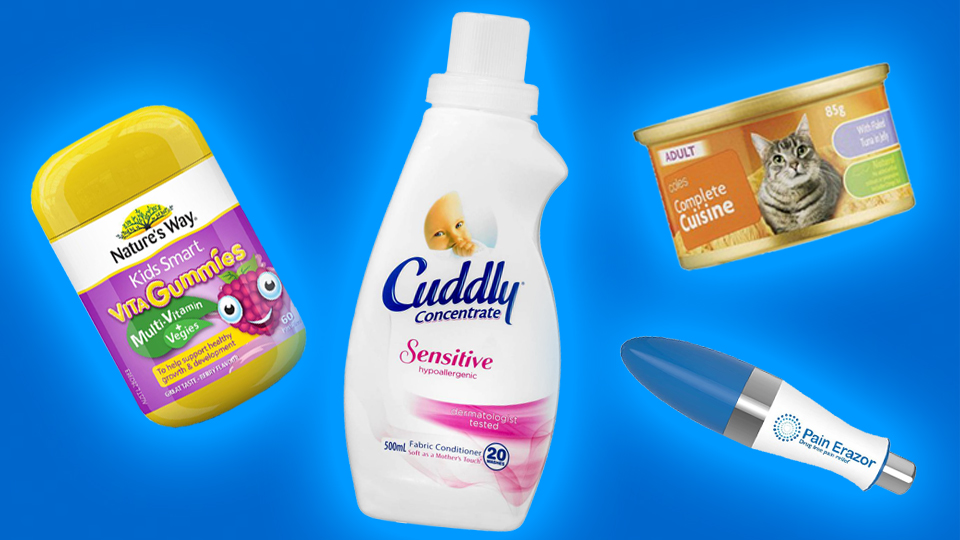 These products were among many to score Choice's dubious honours. Photo: Getty/TND

Cuddly fabric softener that’s worse than water, cat food that’s bad for your furry friend, and a washer-dryer that takes six-and-a-half hours are among the products to have been called out in the Shonky Awards.

The products were named and shamed on Thursday because they leave consumers worse off, consumer group CHOICE said of its annual awards.

CHOICE awarded the Cuddly fabric softener a Shonky “for performing worse than water while costing 3000 times more” at $6 per litre.

Fabric softeners cause irritation to some people, lead to a gunky build-up known as scrud in washing machines, and reduce flame-resistance in fabrics, CHOICE said.

The consumer group ranked 29 softeners, and found Cuddly Sensitive Hypoallergenic was the worst among them.

The Coles brand cat food was bestowed with a Shonky for being “poorly labelled treats that could harm your cat”.

Said CHOICE: “With a name like Coles Complete Cuisine, you’d be forgiven for assuming this product is a nutritionally ‘complete’ food.”

But, said CHOICE, “confusing this tinned snack with a complete food could lead to significant problems like expensive vet bills, your animal companion getting sick, or worse.”

CHOICE gave a gong to Nature’s Way product Vitamin Gummies, from Pharmacare, for claiming “lollies are good for kids’ teeth”.

“You don’t have to be a health nut to realise that delivering vitamins via junk food is a terrible idea,” said CHOICE.

CHOICE railed against the product’s celebrity endorsement from Nicole Kidman’s sister Antonia, and the use of colourful cartoon characters and Disney princesses and Spider-Man in its marketing to catch the eye of children.

A spokesperson directed The New Daily to a statement regarding Vitamin Gummies’ sugar content.

Samsung racked up its third straight Shonky Award for a washer/dryer that takes six-and-a-half hours for one cycle and uses over 200 litres of water.

The tech giant’s past two lemon trophies were for last year’s exploding smartphone batteries, and another unreliable washing machine in 2015.

“Amazingly the first two were for products that caught fire, and this one that wastes water,” CHOICE spokesperson Tom Godfrey said.

#Samsung squeezed out another lemon at the #Shonkys with its pricey washer/dryer that wastes water, energy and time: https://t.co/DEaTkjc6BB pic.twitter.com/bkvYnPs5cr

Westpac enticed parents with a $200 bonus, but CHOICE said it would lead to a lower interest rate and ultimately leave customers worse off.

The bank told The New Daily the account was “designed to help kickstart savings for the next generation and encourage savings habits”.

CHOICE awarded Viagogo a Shonky after the ticket reseller was accused of making false or misleading representations, and engaging in misleading or deceptive conduct by the Australian Competition and Consumer Commission (ACCC) in August.

Viagogo failed to disclose unavoidable booking and handling fees, which increased ticket prices by about 30 per cent, and falsely promoted itself as an ‘official’ ticket seller, the ACCC said at the time.

The car manufacturers won a joint Shonky Award for their handling of the dodgy Takata airbags, which have been linked to 18 deaths worldwide and resulted in a recall affecting 100 million cars.

In Australia, 14 manufacturers sold 70 models of affected cars, but CHOICE said the recall was handled especially poorly by five manufacturers.

“Honda, Toyota, Lexus, BMW and Mazda didn’t tell drivers they’d been provided with a temporary fix, and failed to let a number of them know they were driving around with lethal ‘alpha’ inflators.”

“The Pain Erazor website claims the pen works by exerting pressure on a quartz crystal which produces a tiny electric charge. Apparently this stimulates the body’s endorphins to act as a natural painkiller.”

CHOICE said the instruction leaflet had no clinical information in it.

How are the Shonky Awards decided?

Nominations met one or more of the following criteria:

“The best – or should that be worst? – of these end up being our Shonky Award winners,” CHOICE said.

On Thursday afternoon, CHOICE said it had referred the Coles Complete Cuisine cat food and Vita Gummies to the ACCC for alleged breaches of Australian Consumer Law.

The Shonky Awards: Choice names and shames the worst products and services