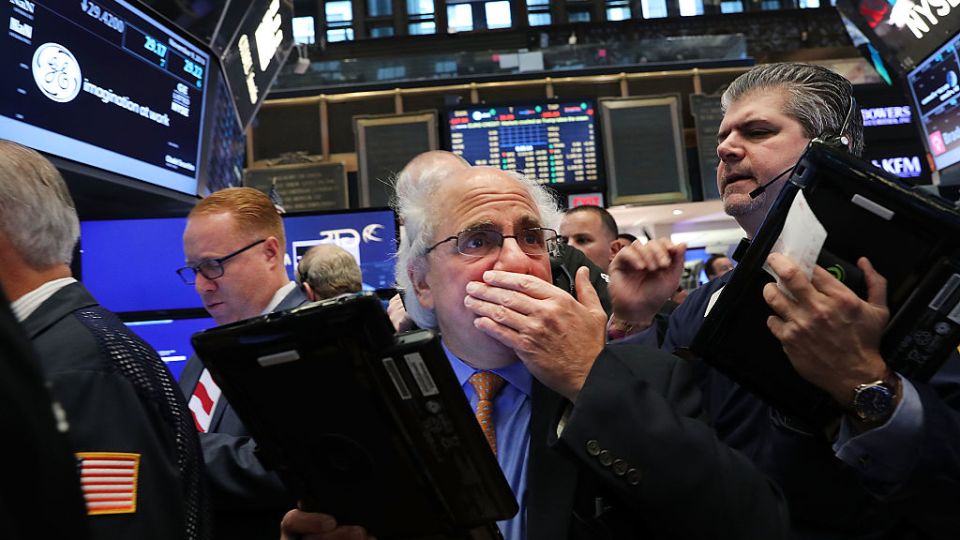 The rout followed a massive slump on US markets overnight. Photo: Getty

The stock market was in mayhem on Wednesday as Australian shares lost $26 billion in the worst single day in four months, with one commentator predicting days or even weeks of turbulence ahead.

The All Ordinaries index fell 1.5 per cent as banks and miners slumped after jitters over the Trump presidency.

The All Ordinaries closed down 87.5 points to 5732. The financial sector was hard hit, closing down 2.13 per cent while the energy sector lost 1.76 per cent. The Aussie market followed the Trump slump on Wall Street where stocks loss 1.2 per cent in value.

That was driven by fears the President will have to delay implementation of healthcare, tax-cut and infrastructure-spending policies which investors hoped would provide economic benefits and higher profits.

The rout spread from the US through Asia where markets were down as much as or more than Australia’s. Yields on government bonds fell as investors looked for safety and iron ore prices fell as well.

Interest rates on US and Australian bonds were 2.41 per cent and 2.76 per cent respectively.

Woodside Petroleum had fallen nearly 2 per cent, while smaller rivals Oil Search and Santos were down 1.6 and 2.3 per cent respectively.

One of the few companies in the black was Newcrest, with the gold miner up 1.72 per cent to $22.52 as investors sought safe havens. Telstra lost 1.3 per cent.

BoA Merrill Lynch chief investment strategist Michael Hartnett said investors were now in a “bullish” holding pattern, with a pause in the risk rally likely to continue through next month.

Michael McCarthy from CMC Markets said the sell-off in smaller companies was even bigger than for the major firms.

“Overnight in US trading we saw an emergence from a period of very low volatility,” he told ABC News.

“Market moves have been very muted and generally upward and yet we saw a reversal of that overnight as some participants worried about valuations and disruptions to the new US administration’s plans to stimulate the US economy.

Mr McCarthy said a number of factors are contributing to the steeper losses locally.

“We’re seeing particular pressure on Australian shares because, not only did shares fall overnight, but certain important commodities traded lower, including copper and oil, and today we’re seeing pressure on iron ore prices,” he observed.

“Having said that, the pullback, as measured by the index, could be as deep as 5 per cent, so we could see several days or possibly even weeks of selling as markets readjust.”

Currency markets also readjusted away from the Australian dollar, which had fallen to 76.6 US cents.