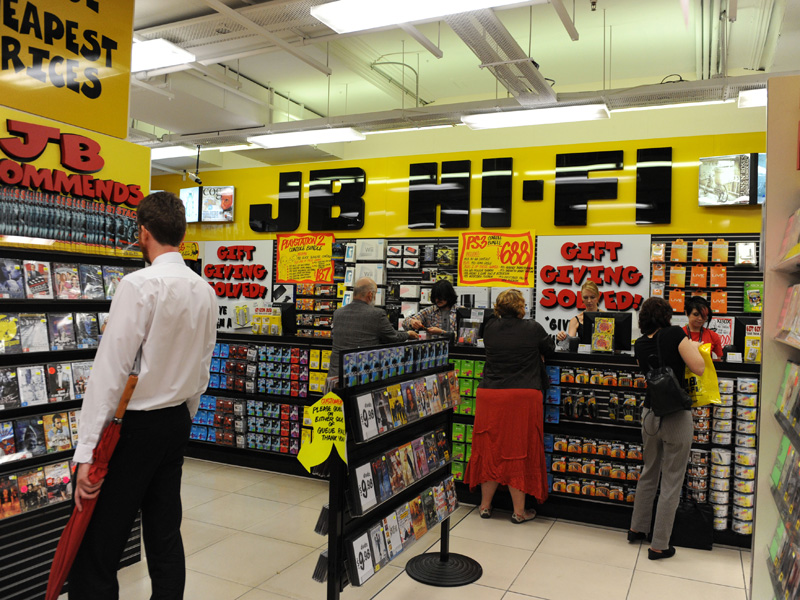 Shoppers have put away their wallets. Photo: AAP

JB Hi-Fi is on the march. The retailer is advancing across the land and whitegoods retailer The Good Guys could be its next conquest.

Its old business is clearly not a good one anymore. The easy days of music and electronics retailing are long gone.

• Bunnings bringing smaller stores to shopping centres near you
• Bunnings unleashed: this is life after Masters
• More brands could follow Dick Smith into oblivion

But JB has learned that it can apply its clever retail model to whole new categories, with potentially massive implications for the rest of us.

We live in a small market where a retailer like Bunnings can dominate its sector, and where Coles and Woolworths are constantly under the eye of the ACCC.

The best retailer in a market can go from being a consumer favourite to a risk to competition before we even realise.

JB Hi-Fi wasn’t always a big deal. I remember when it just sold CDs and stereos and I haunted the CD racks, weighing up paying $30 on a single album.

At that point it was a private company with around 10 outlets, but even then it seemed to know when change was afoot – it was one of the first record stores to completely replace records with CDs.

An incredible result for any stock, not least for one in retail – a sector that has faced so much trouble from the internet and seen much-loved brands like Dick Smith go under.

JB Hi-Fi now has 194 Australasian outlets and rakes in billions in revenue each year.

These days, many of those stores are devoted to toasters, kettles and irons, rather than hi-fi equipment. JB Hi-Fi launched a whole line of stores called HOME, which compete far more with Harvey Norman than with record stores.

That they are now considering taking over The Good Guys (the company says talks are “preliminary and exploratory”) says something about the kind of success they must be experiencing in that market.

JB are not the only ones interested in The Good Guys. Harvey Norman, the biggest home appliance retailer, is also a potential buyer.

On the brink of something big

JB’s approach – including those clever hand-drawn signs that make it seem like a small, local retailer running on a shoestring instead of the billion-dollar international behemoth it is – is apparently a recipe for retail success.

The company is like an invasive species. It proved itself in the tough category of electronics retailing and now, in the land of milk and honey that is household goods, it could be on the brink of exponential growth.

What will that mean for consumers? For now, the market for appliances is diverse and competition concerns are probably not significant enough to trouble the competition watchdog.

But a few more years of JB Hi-Fi expanding and gobbling up rivals? It could be a very different story.

* Jason Murphy is an economist and journalist who has worked at Federal Treasury and the Australian Financial Review. His Twitter handle is @jasemurphy and he blogs about economics at Thomas The Think Engine.

How ‘invasive’ JB Hi-Fi is changing its business