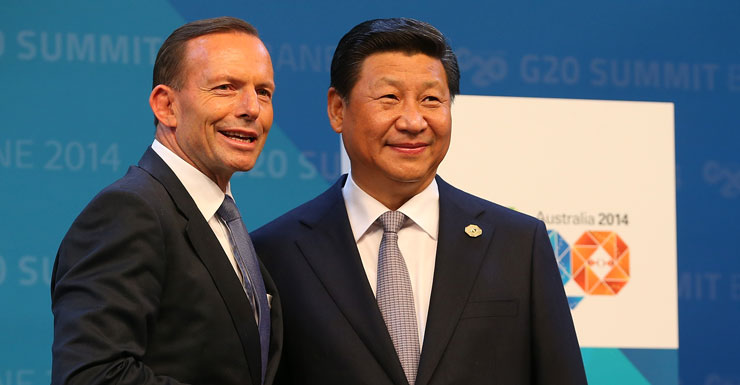 Australian consumers and farmers will have plenty to smile about when Australia signs an historic trade agreement with China.

Chinese President Xi Jinping landed in Canberra on Sunday and will address Parliament in a special joint sitting. He is expected to sign the trade pact on Monday.

• Australia, USA, Japan line up against Russia
• Even world leaders have time for a cuddle
• Leaders turn heat up on Ebola

The Prime Minister’s Parliamentary Secretary Josh Frydenberg said the Government was hoping to formally announce the deal on Monday.

“When you consider China is Australia’s major trading partner, $150 billion worth of two-way trade, this is great news for the Australian cultural sector, the services sector.

China is Australia’s number-one trading partner by a country mile, with the two-way flow of goods and services exceeding $150 billion last year.

Trade between the countries was worth just a quarter of that amount a decade ago.

Australia has recently signed trade agreements with Korea and Japan. The impending deal with the world’s current economic leader is set to open enormous opportunities across a number of areas.

In 2008, New Zealand signed a bi-lateral free trade agreement with China. The progressive deal made by the two countries included reducing tariffs on New Zealand dairy export to zero per cent by 2018.

Since then, New Zealand have become the world’s biggest dairy exporter. This could just be the boost that Aussie dairy farmers need.

While the negotiation details are not yet public or finalised, the proposed trade agreement include tariff reductions and open trade not just within the agriculture sector, but also across professional services in education, information technology, health, urban planning, engineering and architecture.

Professionals and travellers to China can expect a more streamlined visa process. As with the New Zealand deal, the trade agreement is expected to be phased in over a 10-year period.

A taste for all things Australian

China will have access to some of our finest produce, says Brent Finlay, the president of the National Farmers’ Federation Australia.

“This is a wonderful opportunity for Australian agriculture to sell our high quality and just as important, safe produce,” he says.

“China places a lot of emphasis on food safety and this is paramount. As yet we don’t have the exact details of the agreement. The opportunity for China is they have access to high quality, safe products.”

Farmer gets a wish

Having in-roads into large markets such as China has long been on the wishlist for Australian farmers.

“The potential to value-add onto our products is a real benefit for Australian companies. This goes beyond the commodities of beef, citrus, horticulture; this extends to ancillary industries such as packaging and transport.”

The dairy industry, which is worth about $13 billion to the economy, has been lobbying the Government about the importance of the agreement.

Federal Trade Minister Andrew Robb has described this FTA as “the dairy deal”, but farmers have been cautious.

Consumers are winners too

James Laurenceson, an economist at the Australian China Relations Institute at the University of Technology Sydney, says although the big gains will be with producers, consumers will benefit once the tariffs are either removed or considerably lowered on items such as Chinese clothing, footwear, electronics and cars.

“The Trade Minister Andrew Robb has come out with a statement which gives us confidence that there will be some significant gains for the dairy, wine and beef industry,” he says.

“The current tariff on agriculture goods into China is 17.5 per cent. Once lowered this will be a big gain for Australian producers. Although consumers won’t see much benefit here, it will certainly be a boost for the dairy industry and for the Chinese. Currently, a litre of Australian milk in China sells for a price that is several times higher than what we pay here.”

A boost for our job market

Mr Laurenceson said another major advantage for Australia will be in terms of new jobs.

“This is not just because we are selling more products to China; it’s much more than that. The agreement will open doors for business and make it easier for Chinese companies to invest in Australian ones,” he says.

“When the Chinese bought a stake in the North Queensland Tully Sugar Company in 2012, they began spending money on upgrading the sugar mill. This type of investment not only brings in jobs for the locals; the upgrade will produce more output and potential growth.”

The only way is up

If there is a downside, he adds, it will be that the agreement is only with one country.

“It is only a bi-lateral free trade with one country, China, and limited to that. However, the upside is that this can open up more trade agreements with the rest of the world and we have already seen this with Korea and Japan.”

Who wins from an Aust-China free trade agreement?